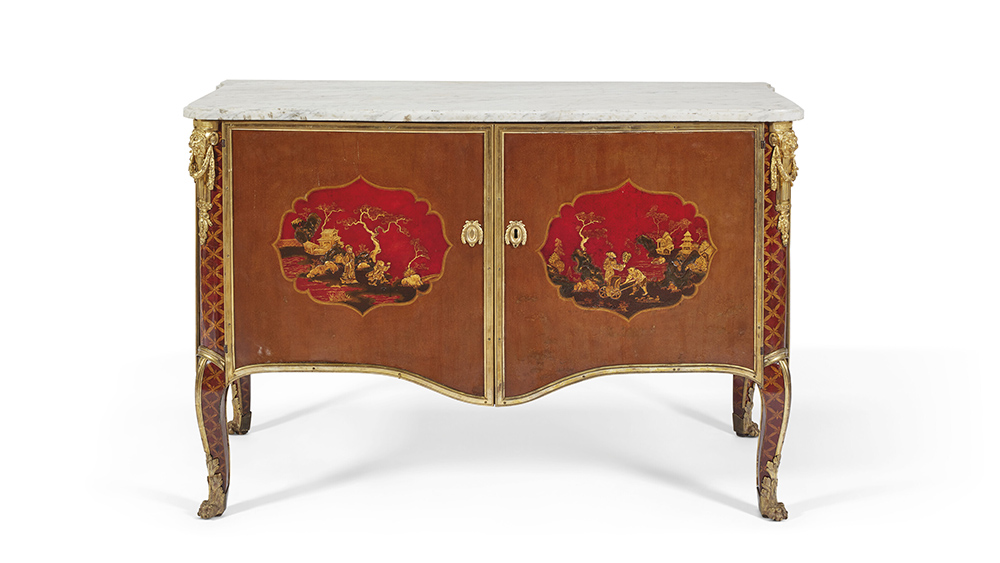 Marie Antoinette had a proclivity for the finer things. So much so, in fact, that her frivolous spending helped spark the French Revolution and eventually led to her execution. No one can argue that the Gallic queen had impeccable taste, though. For proof of this, look no further than some of Antoinette’s exquisite furniture that is hitting the auction block next week.

The two prized antiques, which will be part of the Exceptional Sale at Christie’s Paris on November 22, hail from distinct periods of design and illustrate her majesty’s penchant for all things lavish.

The first piece is a commode that was crafted by Pierre Macret in 1770 for the then 15-year-old queen-to-be Antoinette. The decorative chest of drawers is the epitome of le goût chinois, which was the pinnacle of good taste at that moment in history, according to Christie’s. The commode is fitted with tôle-dorée doors that are curved like rolling waves and feature detailed chinoiserie landscapes.

The second piece was made for the queen nearly 20 years later and exemplifies her constantly evolving design eye. The pastel-blue armchair is part of a set that was designed by Parisian maker Georges Jacob in a pseudo-classical Etruscan manner. Apparently, it was all the rage in the late 1780s. Unfortunately, the royal was only able to enjoy her new Etruscan fauteuil in her Versailles apartments for a couple of years before she was sent to the guillotine in 1793.

After Antoinette’s death, all 17,000 pieces of her extravagant furniture were sold off by the revolutionary government. As a result, the relics are now extraordinarily hard to come by. They’re pricey, too. The 250-year-old Macret commode is expected to realize between $832,000 and $1.25 million, while the Jacobs fauteuil has a pre-auction estimate of $104,000 to $208,000. Don’t be surprised if the duo hammers down for more, though. Last year, a pair of the queen’s diamond bracelets shattered pre-auction estimates and sold for more than $8 million. Sacrebleu!