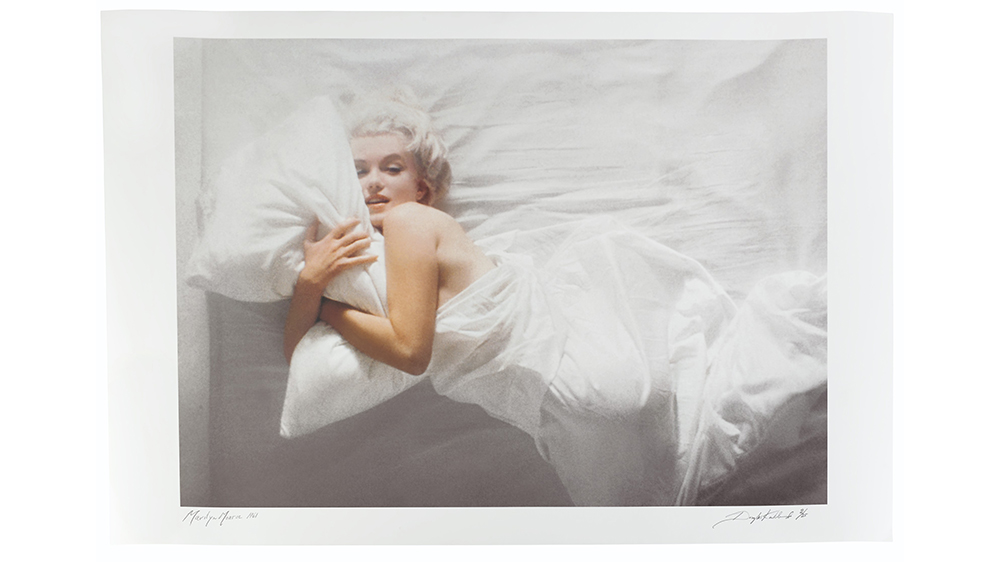 Two of the most famous, and notorious, photographs ever taken of Marilyn Monroe will soon be up for grabs. What’s more, the actual camera used to take them, will be as well.

Later this month, Christie’s will auction two images of the legendary movie star, along with the Hasselblad camera that Douglas Kirkland used to photograph her, as part of its Exceptional Sale. But there’s even more to the set, as the winning bidder will even get to sit for a photoshoot with Kirkland himself.

Included as part of the package are two 40-by-60-inch limited-edition archival pigment prints of Monroe entitled MARILYN (Overhead) and MARILYN (Hugging Pillow). The photos are part of the White Sheet series Kirkland shot in November 1961 for Look magazine’s 25th anniversary issue. Both full-color images feature the platinum-haired starlet rolling around in bed covered in nothing more than a silk sheet.

The photos, which were shot less than a year before Monroe’s tragic death, would help establish the then-27-year-old Kirkland as a celebrity photographer. Over the course of his career he’d go on to shoot an impressive list of A-list stars, including Elizabeth Taylor, Audrey Hepburn, Diana Ross, Andy Warhol and Princess Diana.

“We are thrilled to be offering buyers the chance to own a piece of that magical Hollywood moment when Marilyn owned the silver screen,” Christie’s Becky MacGuire said. “No one connected with the tragic star better than the young photojournalist Douglas Kirkland, who became the photographer of choice for film stars and top movie producers well into the 21st century.”

Also included in the lot is the 1959 Hasselbad 500C camera (no. 36980) Kirkland used to shoot the actress. The 60-year-old camera, which is the same model that helped launched the Swiss manufacturer to success, comes with two Carl Zeiss lenses (50mm and 150mm), as well as two magazine backs used during the original shoot. But that’s not all: The winning bidder will also have the chance to host Kirkland and his wife, Francoise, for dinner and to have the photographer take his or her portrait.