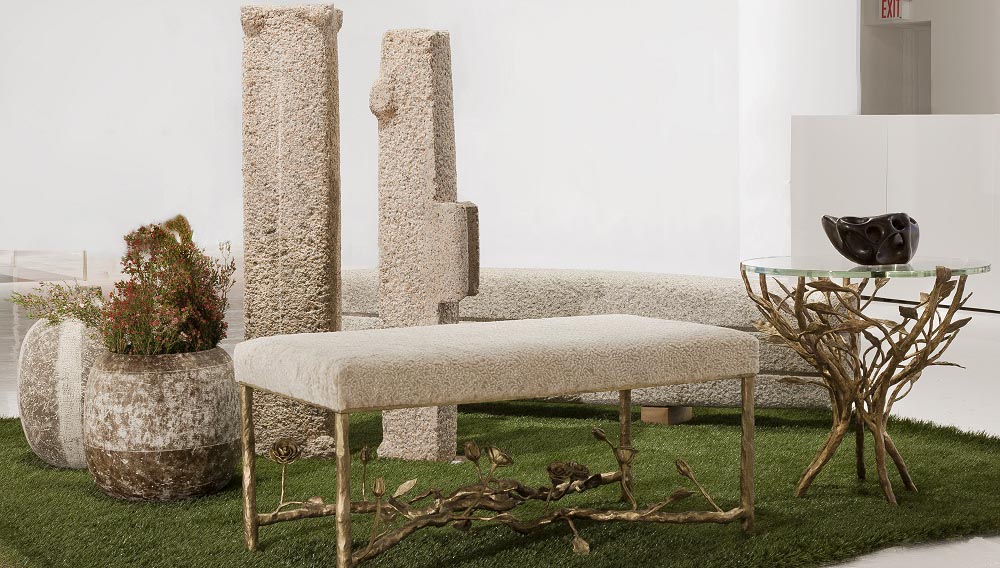 A retrospective of the work of master stone sculptor Yongjin Han, a central and celebrated figure in the field of Korean contemporary sculpture, will open at Maison Gerard in New York, on Wednesday, June 22nd and run through August 22, 2016. Quiet Profundity: The Works of Yongjin Han showcases the artist’s career as an early explorer in Korean abstract sculpture in the tradition of Constantin Brancusi. Han is known as a pioneer in transforming Korea’s tradition of direct stone carving into refined abstraction.

Yongjin Han (b. 1934, Seoul, South Korea) works alone as a stone sculptor using traditional hand tools and carving methods. His stone pieces explore the theme of harmonizing with nature. He believes that each stone has its own history, character, and energy. Carving stone requires great force, especially when working the hard granite that is the bedrock of Korea.  Yet his sculptures, even the monumental ones, are all gentle grace and warmth.  His process is simple, yet arduous:  He works alone, in a state of dialog with the stone, relying on manual tools.  Only by hand can Han  maintain the delicate touch he needs to “hear” what the stone may have to say. It is Han’s task to sense that energy and draw out its visible form. Han, when describing his work, comments, “As stone has been around since the beginning of time, it has much to teach us if we care to slow down and listen.Stone is the backbone supporting the world. It contains all time.”

Maison Gerard will recreate the artist’s studio to contextualize the work and offer a personal perspective of the artist’s process. This will be the first NY solo exhibition for Mr. Han.  The gallery will exhibit about 20 sculptures;  most will be stone but there will also include some early wood pieces and a bronze.  The gallery will also show some pieces that the artist regards as “unfinished” yet that he deems significant. Also, for the first time ever, the public will have the opportunity to view an exhibition of his drawings and 2D works.  The artist has always made drawings wherever he goes,  on coffee cups,  cigarette packs,  as well as on more conventional paper.

Paul Simon, singer, songwriter and Han collector, has contributed text for the Han exhibition catalogue and comments, “Jin Han’s sculptures enhance the natural beauty of stone with a subtle almost whispery elegance; peaceful and powerful at the same time.”

Since its founding in 1974, Maison Gerard (maisongerard.com) has specialized in fine French Art Deco furniture, lighting and objets d’art. Over the past fifteen years the gallery has expanded its focus from 20th century to include a diverse and ever growing range of contemporary design, presenting the work of Hervé van der Straeten, Achille Salvagni, Ayala Serfaty, Carol Egan, Kiko Lopez, Mark Zeff, Matthew Solomon, and William T. Georgis among others.