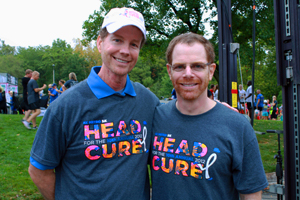 Photo courtesy of Head for the Cure Foundation

Chalk it up to the circle of life. That’s what brought Matt Anthony, president of Head for the Cure Foundation and MD Anderson Cancer Center Board of Visitors member, and Mark Gilbert, M.D., deputy chair and professor of Neuro-oncology, together and made them a successful team.

Both Anthony and Gilbert are pioneers in their respective fields. Anthony is a marketing mogul who serves as the chairman of VML, a global digital marketing agency. Gilbert is a renowned clinician and researcher, focusing on finding a cure for an acute type of brain cancer called glioblastoma. Gilbert’s practice united the unlikely teammates when Anthony’s brother, Chris, was diagnosed with stage IV glioblastoma multiforme in October 2000. Chris fought the disease for more than two years.

“I remember Chris asking Dr. Gilbert about the odds and the path forward,” Anthony says. “Mark responded, ‘We’re on an evolution, a path to successful outcomes. Every evolution ultimately has a revolution. That revolution will be a cure, and you’re entering into that path.’ They were words of hope without unrealistic expectations, a scientist’s perspective delivered in a human way.”

Anthony recalls Chris often saying, “If I can help one person, that will be why I was faced with this disease.” Ten years later, Chris’s legacy has affected thousands, thanks to his brother’s promise to raise money for brain cancer research at MD Anderson.

“I have an unbelievable amount of admiration for Matt’s efforts,” Gilbert says. “It’s heartening to know someone feels so strongly about my ability to advance the care of patients.”

The foundation hosts 5Ks across the country. The inaugural event in Kansas City, the Anthonys’ hometown, has grown from 400 runners in 2003 to 5,000 this year.

“The concept was to bring together centers that have exceptional physicians and brain tumor programs to quickly vet the most innovative clinical trials and bring treatment to patients,” says Gilbert.

Reflecting on the foundation’s rapid growth and overwhelming success, Anthony says, “I know Chris would be proud and honored, but not surprised. I’m sad he’s not here, but this is an intensely positive event, and that’s because Chris’s spirit, character, courage and motivation are its driving forces.”

To learn more about Head for the Cure, visit www.headforthecure.org.