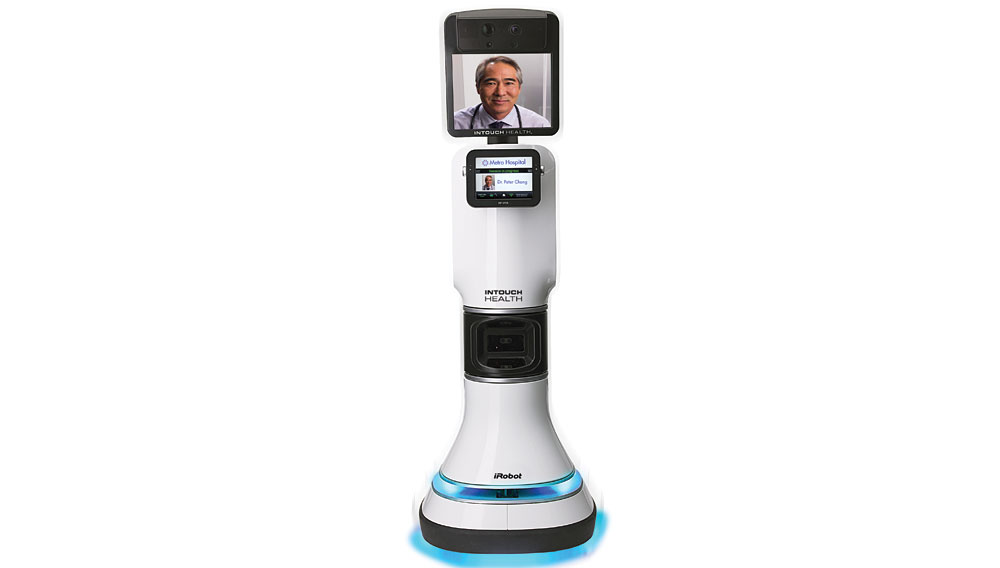 A man rushes into the emergency room (ER) with a critical neurological emergency: He seems to be having a stroke. The specialist is not immediately available, so the ER doctor calls one of the hospital’s neurologists—who is attending a conference on the other side of the world. The neurologist logs on to her iPad, connects with a 5 feet 5 inches, 176-pound robot, and virtually steers it to the patient’s bedside, where she virtually examines his symptoms through the robot’s eyes. Through the “doctor-bot,” she talks to the patient and his wife, speaks with the on-site doctor, and makes an informed life-or-death decision about how to proceed with treatment.

An episode from The Jetsons? No—it is happening today in very real hospitals. As director of neurocritical care at Ronald Reagan UCLA Medical Center, Paul Vespa, MD, has performed in similar scenarios so often they have become routine. Dr. Vespa’s team uses a robotic “surrogate,” dubbed “Eva” (for Executive Virtual Attending physician), every day to remotely check on hospitalized patients, as well as consult on critical emergencies. Eva is the first Food and Drug Administration–cleared robot of its kind to be able to navigate the hospital on its own.

Thirty sensors enable Eva to “see,” via a two-way video monitor in Eva’s “face,” allowing the patient and doctor to view and hear each other. Patients see Dr. Vespa’s head on Eva’s face as he conducts the exam. Unlike a platform such as Apple’s FaceTime, which is dependent on someone else holding the device, Eva gives physicians the ability to work independently, to zoom in on the patient’s chart or zero in on the patient’s body, and to adjust angles and move around the patient’s bed. And Eva’s quick processing speed means no delays or transmission hiccups.

Dr. Vespa says it is possible to have a full-sized Eva of your very own if, say, you are vacationing in a remote location and want immediate access to your private physician. However, Eva’s manufacturer, InTouch Health, also offers a portable system, which costs about $30,000. Essentially a tablet-sized Eva, it has the same audio and video communication abilities, but it lacks Eva’s mobility. Dr. Vespa is test-driving it, so to speak, with discharged patients who live in remote areas, allowing him to follow them closely without either of them having to come to the hospital.

The possibility of detecting disease through the breath is an idea as old as medicine itself, dating back to when Hippocrates linked bad breath to illness. But it has taken the medical community thousands of years to capitalize on this concept. Its first application was the alcohol-sensing Breathalyzer, which made its United States debut back in the 1930s as the Drunk-O-Meter. Even with its success, only in the last few years has breath analysis emerged as a frontier in health testing, thanks to new technology that can assess the composition of single breaths and analyze their complex mixture of hundreds of molecules—all with incredible accuracy.

Cleveland Clinic’s Raed Dweik, MD, director, pulmonary vascular program, has been at the forefront of developing disease-specific breath tests that can detect a huge range of illnesses, including heart failure, liver and kidney disease, and asthma. “Every disease we have looked at so far can be picked up on the breath,” he says. “Everything that shows up in the blood also has traces in the air we expel.”

Scientifically, there are two ways to analyze breath. One is through an “electronic nose,” which enacts the idea that if you train a device (or an animal) to “smell” something specific, it will be able to detect it. The other method is though a mass spectrometry machine, traditionally used in blood and urine testing, which can detect something it has never before encountered. “Our success is due to how we combine the approaches,” says Dr. Dweik.

Dr. Dweik and his team have indeed been successful. Some of the tests they have developed can be done in under a minute and reveal tiny compounds in the parts-per-million or even parts-per-billion range. To put that in perspective, that is the equivalent of finding the one green ping-pong ball in a baseball field filled with white ping-pong balls.

The asthma breath test is closest to finding its way into consumers’ hands (and mouths). Although it was clunky and costly ($50,000) at launch, a new handheld version called the Niox Mino sold by the Swedish company Aerocrine and used in many clinical settings costs $3,000 to $5,000. Dr. Dweik is currently building a smart-phone attachment version for home use, which should hit shelves within two years. He predicts that breath tests for other diseases will also become standard in clinical care, but before that can happen, the size and price tag of the mass spectrometry machines both will need to shrink; physically, they loom larger than washing machines, and they cost half a million dollars.

These breakthroughs even have the government’s interest piqued. Because breath tests can pick up volatiles from environmental exposure—everything from

diesel exhaust to what you had for breakfast—Dr. Dweik says that agencies like the Central Intelligence Agency are eager to take them for a test drive, foreseeing uses that could include testing a suspect’s breath for exposure to bomb-making materials. It is a solid bet that a breath mint will be just as ineffective in fooling these breath tests as it has been in beating the Breathalyzer. ✦