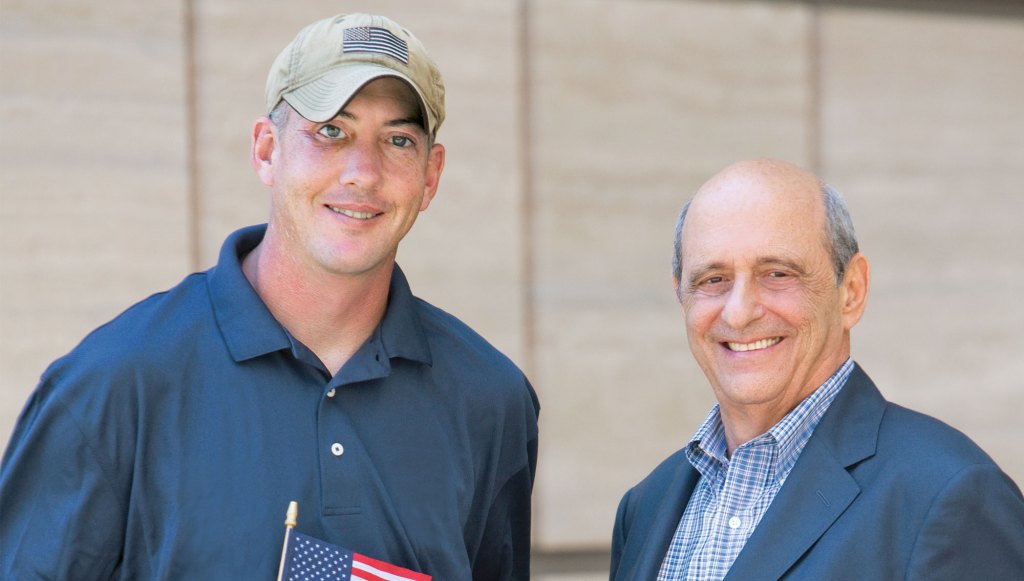 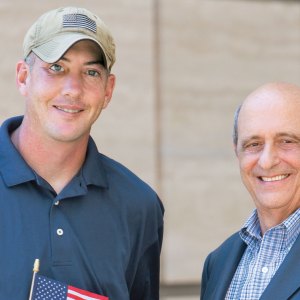 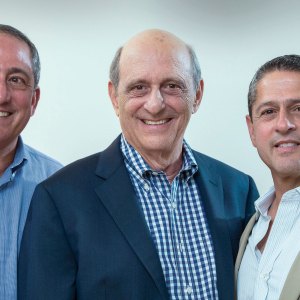 Ron Katz’s quest to deliver top-notch medical care to military service members wounded in Iraq and Afghanistan began with a cable TV program and a jab to the ribs.

One afternoon in the autumn of 2006, Ron Katz—the inventor and entrepreneur—sat curled up on the couch with his wife, Maddie, watching Lou Dobbs on CNN. Dobbs was interviewing Aaron Mankin, a corporal in the U.S. Marines, who was badly injured in Iraq when the armored vehicle he was traveling in rolled over an improvised explosive device and detonated. Six Marines died and a dozen others—including Mankin—were gravely hurt. Third-degree burns covered 30 percent of his body from the waist up; his face was shattered and he lost two fingers on his right hand.

“Lou asked him, ‘What’s next for you?’ And the young man gestured toward his face and smiled. He said he needed surgery to ‘fix the beautiful part,’” recalls Katz. “My wife jabbed me in the ribs and said, ‘We have to do something about this.’”

The following year, the couple donated $1 million to launch Operation Mend, a partnership between Brooke Army Medical Center (BAMC) in San Antonio, Texas, the V.A. Greater Los Angeles Healthcare System, and the Ronald Reagan UCLA Medical Center, where Katz is a member of the board. (Maddie, a former president of the medical center’s auxiliary board, died of cancer in 2009.) Operation Mend provides free medical and mental-health care—including reconstructive surgery, diagnostics for brain injury, and treatment for post-traumatic stress—to military service members.

In previous wars, the men and women Operation Mend treats likely would not have survived their injuries. But because of technological advancements and improvements in combat medicine, they were saved. “Herculean efforts were made to save their lives, but what about their lives after the fact?” says Katz, whose demeanor is both thoughtful and avuncular. “We need to do the right thing by our service members—especially the wounded ones. These kids are volunteers.”

Cpl. Mankin was Operation Mend’s first patient and “he taught us a great deal,” says Katz. For instance, Mankin, who arrived at UCLA for his initial surgery with his wife and 18-month-old daughter in tow, inspired Operation Mend’s signature Buddy Program. The program, run by Katz’s daughter-in-law Dana Katz, matches patients with a local family and provides logistical assistance to their spouse and children. Typically, the Buddy Family invites them to their home for dinner, runs errands, and takes them to a beach or a museum for the day. “We started with a simple question: How do we make the veterans’ faces and physical injuries better? But over time, Operation Mend has evolved to provide a cocoon-like experience that takes care of the soldier and his entire family,” says Katz. “When a soldier is hurt, everyone is dynamically affected: the husband, the wife, and the children, too.”

That is why patients—and their family members—are given a psychosocial screening upon arriving at UCLA Medical Center and are provided with comprehensive psychological support. Upon coming out of surgery, patients are given “quilts of valor,” homemade blankets stitched by Operation Mend volunteers.

To date, Operation Mend has cared for 107 patients. “It’s rewarding when someone regains a function he thought was lost: opening an eye he thought would never open again, restoring function to his hands so he can once again play T-ball with his kids, or reconstructing his face so he can feel comfortable attending a PTA meeting,” says Katz, who has a strong sentimental streak and occasionally gets choked up. “It is powerful.”

Katz was born in Cleveland, but his family moved to the Westside region of Los Angeles when he was 8 years old. His mother was an artist, and his father, Mickey, was a comedian and jazz musician. Mickey had a deep admiration for soldiers. During World War II, he did a two-year USO tour of Europe as the bandleader for Betty Hutton, the peroxide-blonde singer, actress, and pin-up girl. “He adored the servicemen, and so I always held them in high regard too,” says Katz.

Katz, whose brother is Joel Grey—the Academy Award–winning actor—decided against show business. Instead, after graduating from UCLA with a degree in business, he joined the Bendix Corporation.

When he was 24, he left Bendix and with a friend, started Telecredit Inc., which eventually became the first automated call center in the world. He later founded six other companies and today holds more than 80 patents based on inventions he made relating to electronic commerce and computer-controlled monitoring systems. Juice: The Creative Fuel That Drives Today’s World-Class Inventors, written by Evan Schwartz and published by Harvard Business School Press, describes Katz as “the most financially successful inventor in history.”

David Feinberg, MD, associate vice chancellor and CEO of the UCLA Hospital System, calls Katz a “masterful businessman” who is “spectacular to watch” in action. “Ron tapped into the incredible leadership of the military and drove this initiative,” he says.

Katz, for his part, is modest. “It’s been an exciting life,” he says. “But of all the companies and all the inventions, my biggest accomplishment is Operation Mend,” he says. “How many chances do we have to truly change another individual’s life?” operationmend.ucla.edu

Philanthropy is a family affair for the Katzes. Inspired by their father’s dedication to Operation Mend, brothers Todd and Randy Katz recently donated $2 million to UCLA to establish the Ronald A. Katz Center for Collaborative Military Medicine there. The Center functions as a clearinghouse for all military medical needs, including mild traumatic brain injury evaluation and treatment, post-traumatic stress research, and family support.

The gift came as a surprise to Ron. “They are paying it forward,” he says. “We all share in what’s going on.” The gift also represents a new breed of family legacy giving. While many affluent parents set up a foundation with intentions for the next generation to continue with it, it rarely goes on the way it was intended. Often the foundation flounders. “Stewarding a legacy is an obligation and a responsibility,” says Christine Letts, a lecturer at the Harvard Kennedy School who  is an expert on philanthropy. “There is a growing disdain for the idea of leaving your children with a cause that is not their own.” The alternative to the foundation model is to “create good givers,” says Letts. In this case, Ron Katz “demonstrated principles and values, and his sons are emulating those,” she says. “They are modeling what they have learned.”