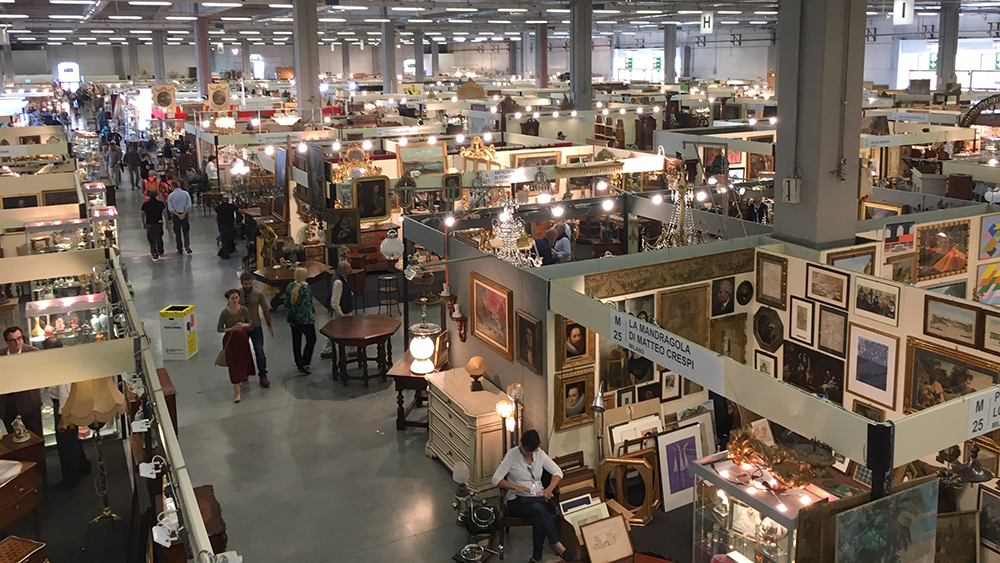 With a roster of more than 1,000 dealers of art, antiques, and midcentury modern Italian furniture, as well as collectibles, vintage haute couture clothing, and classic cars, the twice-annual Mercanteinfiera in Parma, Italy, has been rightly billed as the largest fair of its kind in Europe, with exhibitor stands filling four massive hangars on the Fiera di Parma grounds on the outskirts of the city. Perhaps more interestingly, Mercanteinfiera has gained a formidable reputation as a “secret source” for dealers, interior decorators, and art-market insiders around the globe, among them Andrea Lullo and Andreas Pampoulides of London-based Lullo Pampoulides; John Rosselli of New York; in-demand Washington, DC, designer Mary Douglas Drysdale; Boston hotel designer Steven Favreau; and Venice, Italy-based bon vivant Toma Clark Haines, better known as “the antiques diva.”

A seven-year veteran of the fair’s spring and fall editions, Clark Haines, who regularly brings along a retinue of noted designers and art dealers, considers Mercanteinfiera an absolute must-attend, particularly for those looking to build up substantial inventory for their clients at advantageous prices. “With its stunningly vast array of offerings, one can easily find some of the finest works of art available, from Renaissance paintings to Gio Ponti-designed statement pieces,” she says, “as well as a host of ‘diamonds in the rough,’ important furniture and lighting fixtures that can be easily snapped up for a song by those with a discerning eye for discovery.” Designers who have joined Clark Haines on her many forays to the fair include Denise McGaha of Dallas, Jon Call of New York’s Mr Call Designs, and Steven Moore of the Antiques Roadshow.

Unlike more lofty events, such as the European Fine Art Fair in Maastricht (TEFAF), the 32nd edition of which kicks off next week in the Dutch city, Mercanteinfiera prides itself on not being vetted—the value of what is on offer reliant solely on the eye of the beholder. It is for this reason, plus its sheer volume and variety of inventory, says Clark Haines, that Mercanteinfiera is one of her favorite antiques fairs in Europe,. The fair runs through March 10. Its 38th fall edition will be held in late September.

See more photos of the fair below: