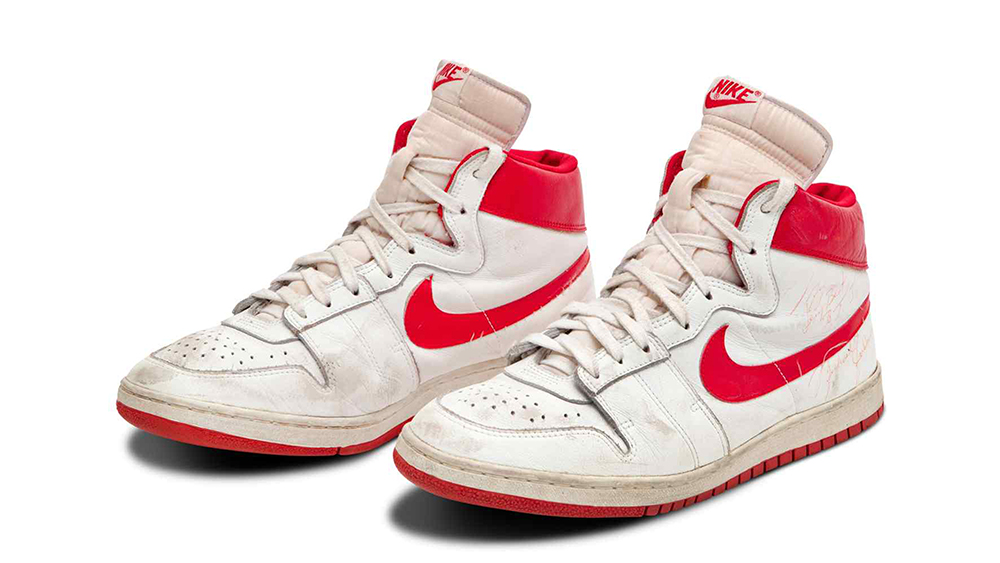 Michael Jordan’s partnership with Nike opened the doors for the massive industry of collectible sneakers. Now, a pair of the shoes that started it all is up for grabs.

On Friday, Sotheby’s announced that it will offer Jordan’s earliest known game-worn Nikes during its Icons of Excellence & Haute Luxury auction on October 24. Known as the Nike Air Ships, the red and white sneakers pre-date the recognizable Air Jordan 1 silhouette, and were designed by Bruce Kilgore, who’s also responsible for the Air Force 1.  Sotheby’s estimate they’ll sell for between $1 million and $1.5 million, the highest-ever estimate for a pair of sneakers offered at auction.

“Michael Jordan and the Jordan Brand helped redefine what a signature line formed around an athlete could be,” says Brahm Wachter, head of Sotheby’s Streetwear and Modern Collectables, in a statement. “This pair, with provenance from Michael’s fifth NBA game really touches two worlds as the Nike Air Ship hold a special place in the hearts of sneakerheads as the precursor to the Air Jordan 1, but beyond that, it is also simply an incredible artifact that dates to the nascency of Michael Jordan’s rookie season.”

Nike gave the future NBA champion a signature line of clothes in shoes in 1984 in a bid to get him to sign a sponsorship deal, just in time for his rookie season. It was notably the first time the company had done anything like it. Jordan signed the deal before the season started, but the Air Jordan 1 wasn’t yet ready for him to wear on the court. In the meantime, Nike made a limited number of Nike Air Ships for Jordan—some of which had “Air Jordan” or “Nike Air” printed on the heels. The signed pair headed to auction is unlike the others that have surfaced on the market, as this pair solely has the word “Air” printed on them.

But because the kicks violated the NBA’s uniform rules, they quickly gained notoriety. A rumor surfaced that the NBA fined Jordan $5,000 every time he wore the sneakers on the court, though Sole Collector notes there’s never been evidence of this. What is true is that league executives wrote Nike a letter stating they’d banned the shoes, which Nike deftly turned into an ad campaign. (The ad’s copy read, in part, “while the NBA threw them out of the game, fortunately, the NBA can’t stop you from wearing them.”)

Jordan gave this pair of Air Ships to Tommie Tim III Lewis, who was a Denver Nuggets ball boy. The auction house rates them as being in excellent condition. The sale will take place at the MGM Aria Resort & Casino in Las Vegas, and the shoes aren’t the only high-flying item available. Other lots include everything from rare Rolexes and Hermes Birkins to a number of collectible automobiles. But given the rarity—and the cultural impact—of Jordan’s earliest Nike sneakers, we wouldn’t be surprised if these shoes turned out to be the top lot.