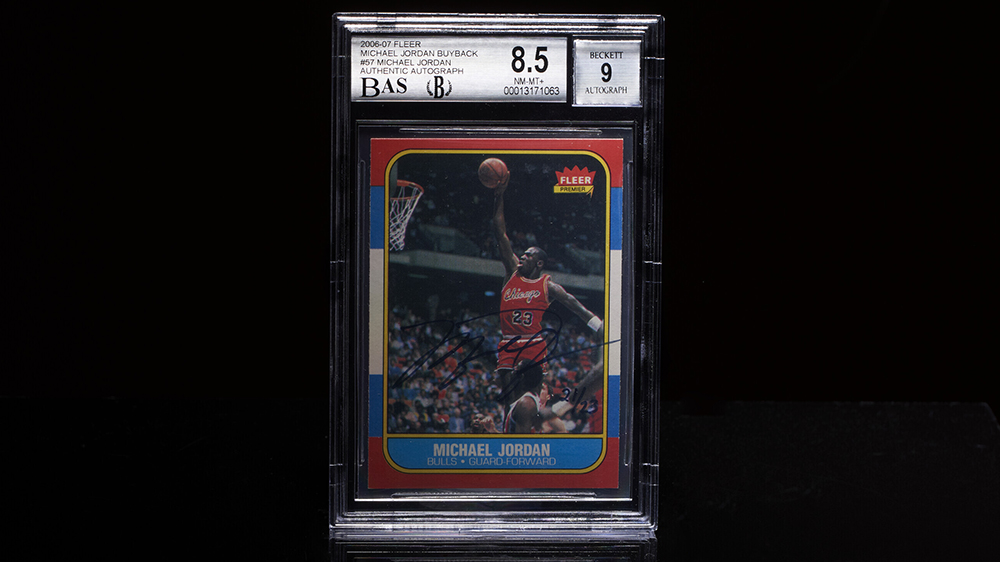 What’s better than a rare Michael Jordan rookie card? How about one autographed by the man himself?

You’ll have your chance to acquire one such card next month when Christie’s auctions off a Michael Jordan Upper Deck Signed 1986 Fleer no. 57 Rookie Card as part of its “Six Rings – Legacy of the GOAT” sale. Be prepared to spend big if you want to win, though. The auction house thinks the card could command as much as $3 million.

This particular Jordan rookie card was released by Upper Deck as part of its 2006-07 set. If you pulled a limited-edition 20th-anniversary card from a pack that season, you could send it to Upper Deck, and in return, the company would send you a signed original Fleer no. 57 in its place. Only 23 of the cards were released and only 14 of those are known, graded and in the hands of collectors, according to Christie’s. This particular example also received an 8.5 from Beckett Grading Services, making it the second-highest graded signed Jordan rookie card in existence.

The rookie card may be the headline lot of the “Six Rings” sale, but it’s hardly the only item of note for both collectors and Jordan aficionados. There are also five pairs of game-worn sneakers on offer. These include a signed pair of Jordan 1s in the red, white and black “Chicago” colorway (expected to sell for between $40,000 and $50,000) and an autographed pair of player-exclusive Jordan XIII low-tops that the legend wore in his second-to-last game as a Bull ($500,000 to $750,000).

Christie’s expects the autographed card to sell for between $2 million and $3 million during the online-only auction, which will run from June 1 to 14. If the gavel price tops the low estimate, it will almost certainly become the most expensive Jordan card of all time, beating out the $2.1 million autographed game-used jersey card from the 1997 NBA All-Star Game sold last summer. And it if sells for more than the high estimate, it could end up as one of the top 10 most valuable sports cards of all time. Number 10 on that list is currently a Honus Wagner T206 card that sold for $3.1 million in 2016.