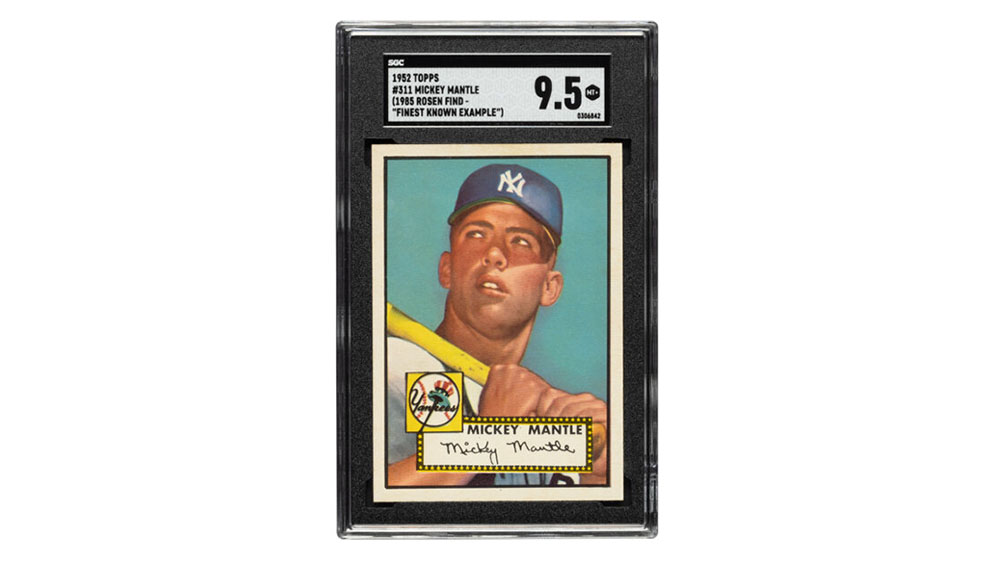 The “finest known” example of Mickey Mantle’s first baseball card isn’t just going to break the record for most expensive sports card, it could completely shatter it.

Bidding for a 9.5-grade copy of the Commerce Comet’s 1952 Topps card that is being sold by Heritage Auctions has already hit $6.2 million, or $7.4 million when you include the buyer’s premium. The total price beats the previous record by $125,000, and with two weeks left in the auction seems guaranteed to climb even higher.

Collectors have been looking forward to this auction all year, and it’s easy to see why. The 1952 Topps Mickey Mantle no. 311 is one of the most legendary baseball cards of all time. It’s often referred to as the slugger’s rookie card, even though it isn’t. Instead it was released by Topps in 1952, the year after he made his debut for the New York Yankees. This specific example is known as “The Rosen Find,” because it was found in a lot of 5,500 baseball cards that included 75 1952 Mantles that was purchased by collector Alan Rosen during the 1980s. It is believed to be the finest of those cards and was briefly the world’s most expensive when it sold for $49,500 back in 1991.

“The Rosen Find” unseats a 2-grade T-206 Honus Wagner that sold for $7.25 million in a private sale last week as the most valuable sports card of all time. We’ll now have to wait and see how much this 1952 Mantle beats the old record by. Before Heritage’s auction kicked off on July 25, there had been speculation that bidding could reach $10 million.

Whatever the final price ends up being, it will be interesting to see how long this card can hold on to its record. The sports trading card market—like so many other collectible markets—has been out of control over the past few years. Since the 2021, the record for the most expensive sports card has been tied or set by five different cards—including by two 1952 Mantles, two T-206 Wagners and an autographed LeBron James rookie card.