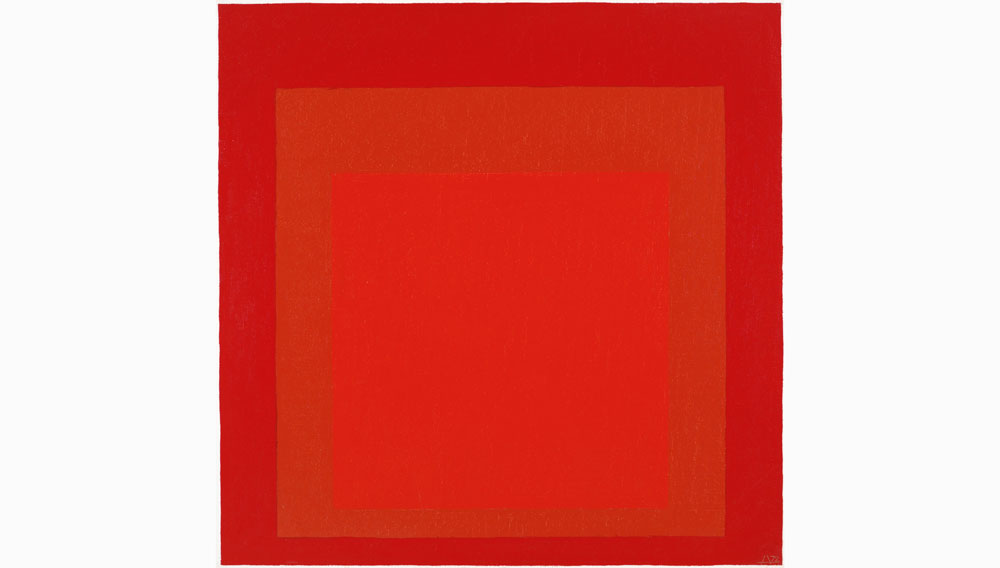 It is fair to say that when Art Basel’s founders held the inaugural edition of the contemporary art fair in Switzerland in 1970, they never imagined that it would turn into an art-world juggernaut where millions of dollars change hands. It has grown into a must-attend event for dealers, curators, and collectors alike, last year bringing more than 92,000 visitors to Basel, Switzerland’s third-largest city. The 46th annual fair takes place from June 18 through 21, with 284 leading galleries from 33 countries in North America, Latin America, Europe, Asia, and Africa, selling exceptional works in all media.

Waddington Custot Galleries of London will offer a Josef Albers piece from the Study for Homage to the Square, rendered in shades of red, from 1972. Albers became an art-world immortal with Homage to the Square, a spellbinding series inaugurated in 1949 that explored the optical qualities and effects of colors. A 1964 nonstudy work from the series, Homage to the Square: White Nimbus, sold at Christie’s New York in November 2012 for $2.2 million against an estimate of $400,000 to $600,000.

A 1982 Pumpkin painting by the peerless Japanese artist Yayoi Kusama will appear at the booth of Peter Blum Gallery of New York. The modest gourds have been a favorite subject of hers throughout her long, international career, which got off to a fine start with her first New York solo exhibition in 1959. Artists Donald Judd and Frank Stella, titans in their own right, attended and became firm fans. At auction last year, Kusama’s art became the most expensive of any living female artist when White No. 28, a 1960 piece from her Infinity Nets series, fetched $7.1 million at Christie’s.

Sperone Westwater of New York will present the lush, gold-dominated painting from 1961, Concetto Spaziale, by Argentine-born Italian painter Lucio Fontana. Many of his finest works belong to his Concetto Spaziale (conceptual space) series, launched in 1949. Sotheby’s London sold a 1965 Concetto Spaziale canvas earlier this year for $12.7 million. And the Fraenkel Gallery of San Francisco will present images from Nicholas Nixon’s The Brown Sisters, the iconic suite of portraits that he started in 1975. A complete group of 40 photographs sold at Sotheby’s New York in April for $370,000 against an estimate of $200,000 to $300,000.

New for this year at Art Basel, 57 galleries on the downstairs floor will change position to create a special focus on modern and historical material, from classical modern to postwar contemporary, with paintings by such artists as Max Ernst, René Magritte, and Picasso, and sculptures by Henry Moore and Aberto Giacometti. (artbasel.com)