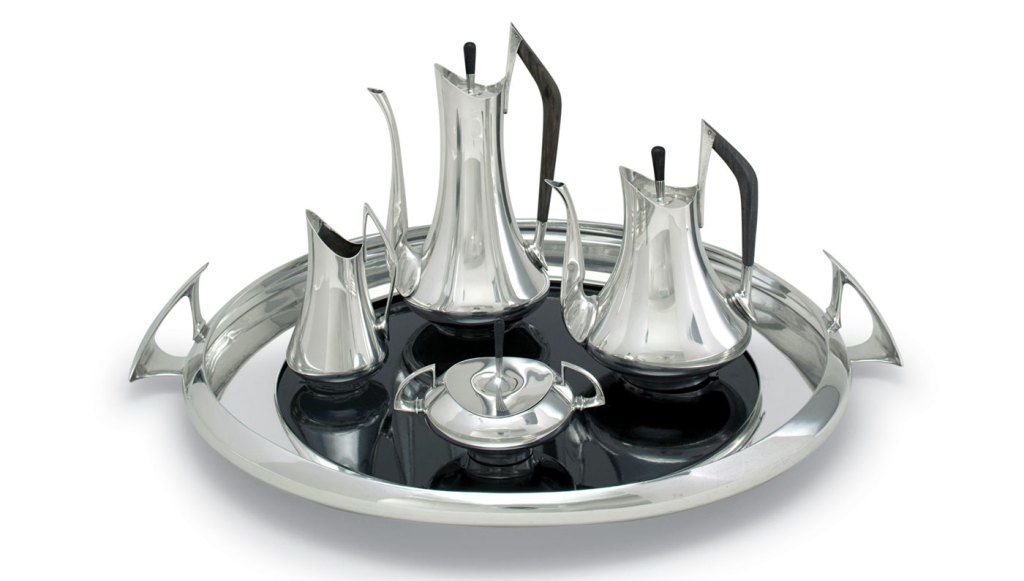 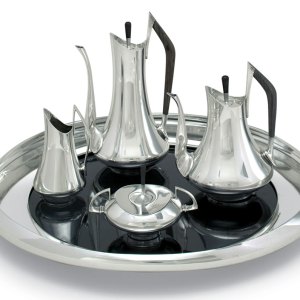 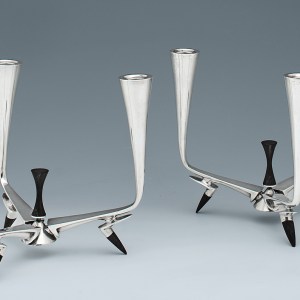 Silver manufacturers in the States found relatively little demand for the modern-looking services, sets, and pieces they produced in the 1950s and ’60s. It seems that the designs, some of which could double as abstract sculpture, deviated too far from the heirloom items that they continued to make. “They were radically, radically, radically different designs,” says James Infante, a 20th-century decorative-arts dealer based in Manhattan. “The silver companies took a stand and hired new, young designers. They didn’t do it for the hell of it. They wanted a market.”

But initially at least, the market was small. Consequently, items such as the sterling-silver tea-and-coffee service shown here were produced in limited quantities. As collectors have grown nostalgic for such designs and the era they represent, the pieces have become high-priced rarities. The service is from the Circa 70 line, which the Gorham Manufacturing Co. of Rhode Island produced in the late 1950s and early ’60s. It belongs to S.J. Shrubsole, an antique-silver gallery in Manhattan, and is available for $32,500. “It’s such a strong design,” says gallery vice president James McConnaughy. “It really does remind people of Sputnik and the Jetsons.”

Infante has a $12,500 Circa 70 decanter and cordial set. It was produced in 1960 and probably looks like nothing your grandmother owned. Its six narrow-waisted cups flank a decanter that calls to mind Seattle’s Space Needle (which was built two years later). Infante knows of only two other examples of this set, and both belong to museums.

Factors other than rarity and sentimental value contribute to a silver piece’s appeal. “The works that rise above the rest are firmly rooted in aesthetics,” says Michael Jefferson, senior vice president at Wright, an auction house based in Chicago and New York that specializes in 20th-century design.

Attractive as some modern silver pieces are, they can serve more than just decorative purposes. S.J. Shrubsole has a $16,500 pair of Circa 70 candelabras that, says McCon­naughy, can definitely be used on the dining table. However, Jefferson is not so sure about the utility of other pieces, noting, “I’ve not actually known someone to pour tea from a [Circa 70] teapot.”