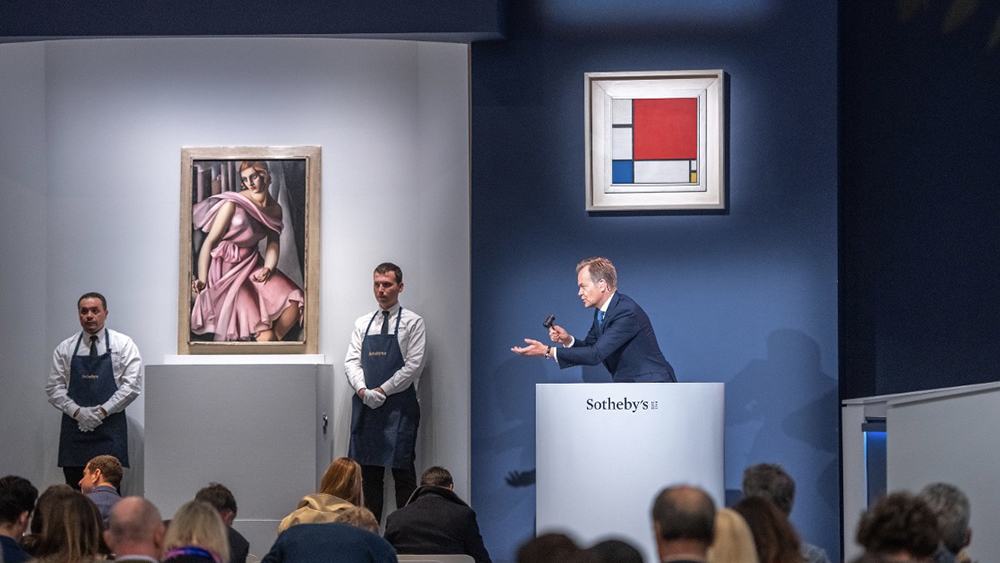 Even though the transactions surpassed the house’s estimate of $318 million, they failed to build on the momentum that began last week when Christie’s kicked off the fall auction season in New York with a bang. The company had offered the late tech mogul Paul G. Allen’s, which raked in a staggering $1.5 billion with fees—the highest sum ever reached for a public single-owner sale. Still, the Sotheby’s auctions minted a new record for Piet Mondrian, with one of his paintings selling for $51 million.

Two historic figures from the New York art scene held some of the works offered at Sotheby’s sales on Monday night. Paintings and sculptures from the collection of the New York attorney David Solinger, who formerly served as president of the Whitney Museum before his death in 1996, attracted attention from collectors. Kicking off the two-pronged event, the Solinger sale brought in $137.9 million.

The second sale included several pieces owned by the New York media mogul William Paley, who died in 1990. The funds gained from these works will be put toward an endowment fund focused on digital initiatives at the Museum of Modern Art in New York, where Paley served as a longtime trustee and benefactor.

The 23-lot Solinger auction was a white-glove sale, meaning that all the works in it sold. Many of those works achieved prices above their high estimates.

At the following 44-lot auction, just 36 works sold, with some failing to meet their low expectations. Twenty-one of those works came with third-party guarantees, minimum bids that auction houses secure in deals with outside backers to offset financial risk.

“Not every sale can be an Allen,” art advisor Wentworth Beaumont, who attended the sale in person, told ARTnews.

Conducting the two-pronged event, which saw only a few moments of fierce competition, was Sotheby’s auctioneer Oliver Barker. The usual crowd of advisors and dealers was on hand for the three-hour-long event.

Specialists speculated that tempered energy among participating clientele may suggest that the night’s focus—a largely trophy-free sector of the modern-art category—is suffering a prolonged lull in demand post-Covid. “This was a sign that we are returning to reality,” said Sotheby’s contemporary art specialist Julian Dawes to Barker at a press briefing that followed the auction. “In 2016 or 2017, this would have been a wonderful sale.”

Jean Arp’s amorphous limestone sculpture Fruit méchant (1936) started the sale with a small jolt of energy that quickly waned as other lots hit the auction block. It attracted multiple bidders and eventually hammered on a bid of $2 million, four times its low estimate of $500,000. Going to a client on the phone with Sotheby’s Americas chairman Lisa Dennison, it went for a final price of $2.4 million. Other works by Jean Dubuffet, Pierre Soulages and Fernand Léger were among the less pricey items which outpaced estimates ranging between $1.5 million to $2 million.

But Solinger was known for buying works by postwar New York artists whom he cultivated as friends before their respective rises to art world fame, and it was these pieces that highlighted this first auction. One of them was by Willem de Kooning, whose 1950 abstraction Collage was this sale’s top lot. Sotheby’s New York contemporary specialist Bame Fierro placed the winning bid of $29 million for the painting. After fees, that number rose to $33.6 million.

The second-most expensive work was a hand-painted Giacometti sculpture cast in 1948. Titled Trois hommes qui marchent (grand plateau), it features a cluster of three of the artist’s signature walking man figures and was won on a bid of $25 million, against an estimate of $15 million. Commissioned by Solinger after he met the artist at the latter’s Paris studio, the work went to a bidder in the room who prevailed over another competing buyer on the phone with Sotheby’s Asia chairman Jen Hua after a seven-minute battle. With fees, it was bought for $30.2 million.

A mobile sculpture by Alexander Calder and a painting by Joan Miró also saw bids placed by buyers based in Asia. Calder’s all-black mobile Sixteen Black with a Loop (1959) fetched a final price of $8.4 million with fees, more than doubling its $3 million low estimate.

Though new artist records were not the focus of Monday’s night’s achievements, one for the Dutch modernist Piet Mondrian, the subject of a recently released biography and a retrospective at the Fondation Beyeler in Riehen, Switzerland, seemed overdue. Leading the second portion of the night, Mondrian’s Composition No. II, a 1930 multicolored grid deriving from the artist’s signature abstract geometric paintings, hammered on a bid of $48 million, going to an Asian bidder. It sold for a record-breaking $51 million with buyer’s fees.

The result only just barely surpassed the artist’s previous auction record of $50.6 million, set in 2015 when his 1929 Composition No. III, With Red, Blue, Yellow and Black sold at Christie’s New York. Composition No. II had last appeared at auction in 1983, when a Japanese collector bought it for $2.2 million.

Five works that had been on long-term loan to the Museum of Modern Art in New York, given as part of a posthumous agreement with Paley’s charitable foundation, were sold in the second portion of the night.

The most valuable of the five from the Paley loan was Pablo Picasso’s 1919 Cubist still life Guitare sur une table, which hammered at $32 million, going to a bidder on the phone with Sotheby’s New York business development representative Brad Bentoff. It went for a final price of $37 million with fees, surpassing its $25 million expectation, which had been designated as an estimate upon request by the auction house’s specialists ahead of the sale.

Another top earner was a black sculpture of a reclining figure from 1951 by Henry Moore that sold for $26 million with fees. That price may be high compared to other lots in this sale, but it was not an impressive result—the piece failed to reach its $30 million estimate.

Elsewhere in the sale, works by Henri Rousseau, Joan Miró, Pierre Bonnard and August Rodin sold for prices between $1.4 million and $4.6 million.

The grouping fetched a collective $47 million, about $10 million more than the house estimated that it would bring in.

There was one plus to the modest bidding: The sales ended relatively quickly. “Report on that, Sotheby’s gets everyone home at a reasonable time,” Barker said.