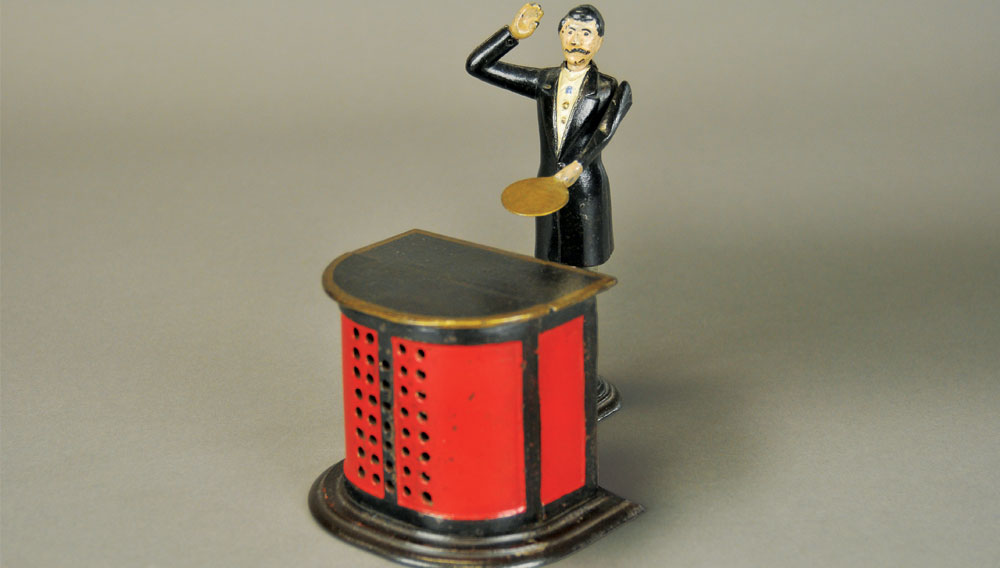 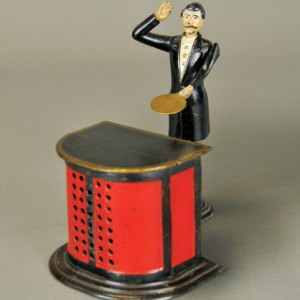 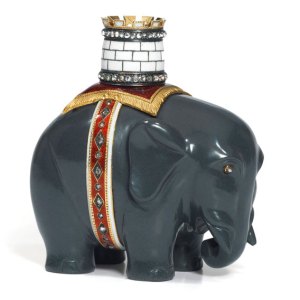 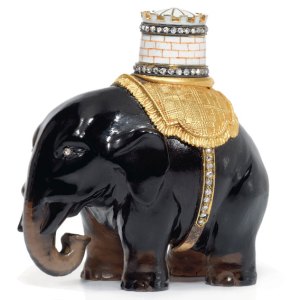 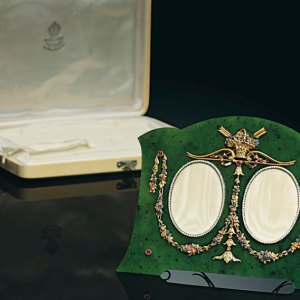 The upcoming auction of a mechanical-bank collection promises to draw plenty of interest.

Max Berry remembers the evening in the early 1970s when he and his wife hosted Yitzhak Rabin for dinner at their Washington, D.C., home. Rabin, who would serve as Israel’s prime minister from 1974 to 1977 and from 1992 until his assassination in 1995, was Israel’s ambassador to the United States at the time. Before dinner, Berry (an attorney specializing in international trade) and Rabin were in the guest bedroom, where Berry kept his collection of antique toys. They were sitting on the floor, playing with a William Tell mechanical bank. Like other mechanical banks, this one was designed to charm children into saving money. It was operated by loading a coin into Tell’s rifle and then pressing his right foot to launch the coin at an apple sitting on his son’s head. If the aim was accurate, the coin flew into a slot above the head of the boy. The boy then raised his arms, the apple vanished into the castle that he was leaning against, and a gong sounded. “[Rabin] was playing with it, and the coin was bouncing off,” Berry recalls. “He wasn’t doing it right.”

With some coaching from Berry, Rabin eventually mastered the machine, and once he had done that, he did not want to stop playing with it. When Berry’s wife announced that dinner was ready, Rabin begged, “Just one more time.”

Berry, who is now 78, had become similarly enraptured by mechanical banks a few years earlier. He began acquiring them in 1967—along with other antique toys—and over the years amassed what may be the world’s most valuable collection. On November 14 and 15, Bertoia Auctions of Vineland, N.J., will hold the first of two sales to disperse hundreds of Berry’s banks and other antique toys. One of the sale’s choice items is the circa-1876 Preacher in the Pulpit mechanical bank shown here. It is in pristine condition and has an estimated value of $150,000 to $200,000.

Most of the antique mechanical banks were produced from the late 1800s until World War II. The majority were made in the United States and forged from cast iron.

Dan Morphy, owner of Dan Morphy Auctions in Denver, Pa., presided over the last major sale of mechanical banks, in 2007. It involved the Stephen and Marilyn Steckbeck collection and included 14 banks that sold for $100,000 or more. The highest-priced lot was a Jonah and the Whale–themed bank that fetched $414,000. “I’ve been handling mechanical banks for 25 years,” says Morphy. “The market has been very constant and consistent. I’ve never lost money with mechanical banks.”

Collectors value condition above all else. A mint-condition bank that no longer works can trump one that functions but shows wear. This creates a dilemma for owners. The banks were made to be played with, but playing with them can chip their paint, which in turn lowers their value. Five years ago, for a museum exhibit, Morphy filmed in slow motion the action of the Calamity, a football-themed bank in which the three players’ heads collide. “In hindsight, I wish I hadn’t done that,” he says. “It was near mint, and you could see small pieces of paint fly off the heads.” (Though its paint was chipped during the filming, the bank still sold at auction for $45,000.)

Berry has no such regrets about allowing Rabin to play with his William Tell bank—and not just because it is among the less valuable of his prizes (Morphy says William Tell banks generally sell for $500 to $800). “Rabin felt so much tension, being an ambassador,” Berry says. “It was fun to see him having fun.”