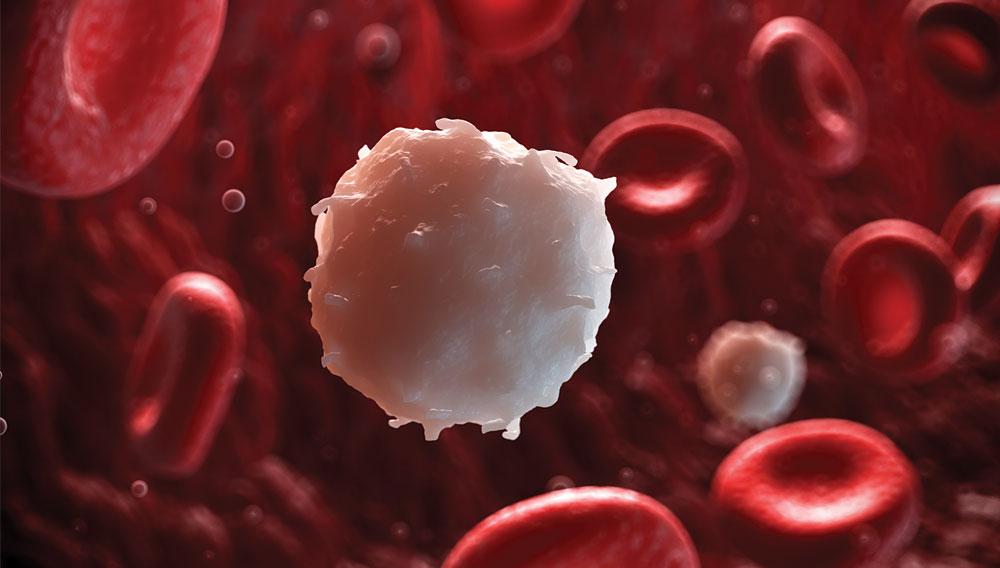 At MassGeneral Hospital for Children (MGHfC), researchers within the six independent, interdisciplinary, and collaborative laboratories of the Developmental Immunology Program move freely between model organisms and mammalian systems to determine the molecular basis of the host organism’s ability to recognize and respond to microbes. Using an approach initiated by R. Alan B. Ezekowitz, MBChB, DPhil, former chief of MGHfC, researchers investigate the immune system both in terms of its development through evolution—as understood through study of the nematode worm C. elegans and the fruit fly, Drosophila—and as it develops in early childhood.

According to Adam Lacy-Hulbert, PhD, program director, work in the labs also spans both the innate immune system—the first line of defense against invading micro-organisms—and the adaptive immune system, which allows the host to remember pathogens, mount a progressively stronger defense, and build immunity. These include studies on the beneficial response against pathogens, such as those directed by Javier E. Irazoqui, PhD, in immune defense to bacterial infection in C. elegans, and others focused on the potentially harmful nature of the immune response—for example, in lupus or cystic fibrosis, in work directed by nephrologist Elahna Paul, MD, PhD, and Thomas Bernard Kinane, MD, chief of pediatric pulmonology. This broad-based approach is further enhanced by affiliations with Massachusetts General Hospital’s Center for Computational and Integrative Biology, the Broad Institute, Massachusetts Institute of Technology, and local and national professional societies.

Recent work emerging from the Developmental Immunology Program labs sheds new light on the processes that activate the innate immune system and regulate the adaptive immune system, including the fact that, at times, the same molecule is implicated in both responses. Understanding these mechanisms paves the way to treatments that can activate or strengthen immunity or, conversely, ameliorate inflammation.

The innate infection response involves the recognition and ingestion of harmful bacteria by white blood cells called phagocytes as well as launch of an inflammatory response. In the late 1990s, a number of scientists, including the winners of the 2011 Nobel Prize, Jules A. Hoffman, PhD, and Bruce A. Beutler, PhD, helped pinpoint the significance of the Toll-like receptor (TLR) gene family in the innate immune system’s ability to detect the presence of pathogenic micro-organisms and in initiating a response. This family of around a dozen “pattern recognition receptors” is instrumental in the immune response, and its downstream signaling pathways are now well-defined. However, the specifics of which receptors respond to which pathogens and how activation occurs are poorly understood. One research focus within the Developmental Immunology Program is this activation of the innate immune response via such pattern recognition receptors. In a collaborative effort with investigators in the Department of Medicine at Mass General, MGHfC nephrologist Lynda Stuart, MD, PhD, was among the first to pinpoint the importance of the receptor protein CD36 in recognizing Staphylococcus aureus and Methicillinresistant Staphylococcus aureus (MRSA) and in regulating the response to these bacteria. Therapies that boost this response, says Dr. Stuart, may help combat S. aureus and related diseases, reducing postsurgical infections and the increasing threat from MRSA. Ongoing studies in the Developmental Immunology Program, including the work of faculty member Javier Irazoqui, PhD, continue to use a variety of approaches to investigate the host response to S. aureus and are designed to identify and further explore potential avenues for therapeutic intervention.

These investigations of the role of CD36 led recently to a new understanding of the receptor’s shadow side: the CD36-mediated inflammatory response is involved in the development of atherosclerosis and Alzheimer’s disease. Scientists had believed that the pathology of these diseases was rooted in chronic stimulation of the innate immune system, but they were uncertain of the molecular mechanisms that cause a protracted sterile inflammatory response. In another fruitful collaboration with investigators in the Department of Medicine, the Stuart lab probed interactions between CD36 and members of the TLR family in an attempt to pinpoint the specific activities responsible for activating the innate immune response to sterile ligands that accumulate in atherosclerosis and Alzheimer’s disease plaques.

The researchers found that CD36 recognition of the low-density lipoproteins characteristic of atherosclerosis and the β-amyloid proteins responsible for neurotoxicity in Alzheimer’s disease is the initiating event in the inflammatory cascade. This inaugural event triggers the formation of a novel macromolecule complex composed of two TLR proteins, which, in turn, launches innate immune activation. The receptor, therefore, represents a possible target for medical therapy in Alzheimer’s disease and atherosclerosis and opens the door to further investigation of the combined signaling among TLRs for clues to other inflammatory diseases.

Vital Process Identified in the Development of Inflammatory Bowel Disease

Of particular interest to members of the Developmental Immunology Program is the regulation of the immune response in the intestine and how phagocytes, such as dendritic cells, contribute to this process. Dendritic cells, which mediate between the innate and adaptive immune systems, were identified in 1973 by Ralph M. Steinman, PhD, who shared the 2011 Nobel Prize in Physiology or Medicine with Drs. Hoffman and Beutler. These cells respond to innate immune signals and activate a subtype of lymphocyte known as T cells. Specific populations of T cells, such as Th17 cells, aid in the immune response to infection by harmful bacteria, while another subset, regulatory T (Treg) cells, prevent immune responses to beneficial bacteria and food antigens. However, little is known about the molecular activities that control and drive these responses.

Recent work from Dr. Lacy-Hulbert’s lab focuses on a family of adhesion molecules known as alpha(v) integrins (αv integrins) that extends across the dendritic cell membrane to mediate communication between the cell and its environment. The investigators demonstrated the role of these αv integrins in the regulation of mucosal immunity in the gut by developing a mouse model that lacked the gene for the adhesion molecule in dendritic cells. These animals developed inflammatory bowel disease very similar to ulcerative colitis and Crohn’s disease, indicating that the integrin is critical to the body’s response to bacterial and fungal infections. Communication between immune cells, such as dendritic cells and T cells, occurs through protein molecules called cytokines, which are manufactured at high levels during immune responses. Dr. Lacy-Hulbert’s group discovered that in the αv integrin knockout mice, T cells were unable to respond to signaling by the cytokine transforming growth factor beta (TGFβ). This is essential for the function of Treg cells, and as a result, the intestinal immune response remained stuck in the on position, leading to inflammatory responses to normal gut bacteria. The work identifies a fundamental aspect of how dendritic cells instruct T cells to respond in the context of the intestine and presents an opportunity for further study of the pathways by which immunity develops in children, as well as continued research into the potential targets for inflammatory bowel disease.

Dr. Lacy-Hulbert’s group used the same mouse model to further investigate the role of αv integrins in other inflammatory disorders. TGFβ was also thought to be required for development of overactive Th17 cells, which are implicated in many autoimmune diseases. To test this, the investigators immunized control animals and αv integrin knockout mice against proteins normally present within the myelin sheath to generate an immune response that mimicked multiple sclerosis. The mice lacking αv integrin were completely protected in this model. Drugs targeting αv integrins are already available for use in some types of cancer and other conditions. Therefore, if further study indicates targeting this cytokine is effective in combating inflammatory bowel disease or multiple sclerosis, a therapy is already available.

In addition to recognizing and combating virulent micro-organisms in the digestive tract, the immune system must overlook the harmless and beneficial bacteria that are constantly present. This process is not entirely explained by pattern recognition receptors like CD36 because the same patterns are often present in both pathogenic and nonpathogenic microbes. Some other mechanism must be at work.

Researchers within the Developmental Immunology Program recently defined a novel way in which the immune system distinguishes pathogens from commensal bacteria. The essence of this recognition, Dr. Stuart explains, lies in the fact that harmful bacteria secrete toxins. The immune system has learned to respond to these toxins and to subsequently induce the immune response. This process, known as effector-triggered immunity, has previously been defined in plants; the new work demonstrates the same principle is at work in flies and mammalian cells. From a clinical perspective, the discovery is important because it identifies a possible therapeutic target in the inflammatory response that could be effective in treating dysentery or food poisoning caused by E. coli. The toxins produced by the bacteria have demonstrated an ability to mount an aggressive immune response and are already available in purified form. Potentially, they could be used as a mechanism for oral vaccine delivery.

These studies and other advances in identifying genes relevant to the immune response that have therapeutic potential are expedited because of the unique approach used by the Developmental Immunology Program. Unlike most basic science researchers, program investigators move readily from model organisms to mammals and back to the model system, using the simple organisms to uncover novel genes and then studying the role of those genes in more complex systems. This model for discovery facilitates efficient translation of basic science discoveries into possible solutions to clinical problems.