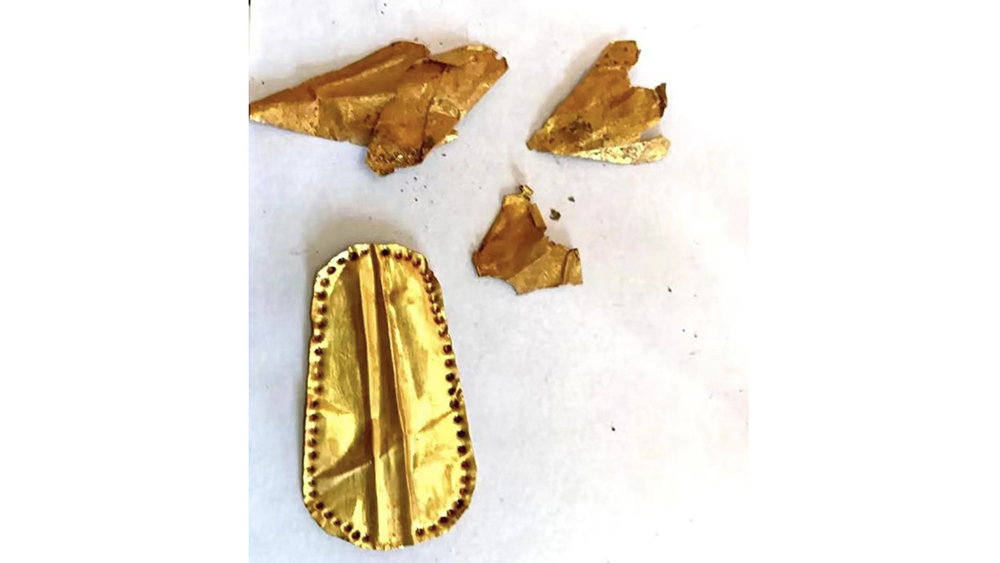 Courtesy of the Egyptian Ministry of Tourism

Several ancient tombs containing mummies with gold tongues in their mouths have been discovered by archaeologists in the ancient cemetery Qewaisna, located roughly 40 miles north of Cairo, Egypt. The finds date between 300 BCE and 640 CE.

Egypt’s Supreme Council for Archaeology said it found an extension of the cemetery that contained archaeological tombs dating to various periods.

In some of the mummies’ mouths, a number of golden chips in the form of human tongues were found in a poor state of preservation. Several mummies were also discovered with gold on the bones directly underneath their linen wraps. Some of the gold chips had been molded into scarabs and lotus flowers.

Additionally, the team found funerary amulets, pottery, glue, and tar used in the burial process, along with the remains of wooden coffins and several copper nails.

It is believed that the mummies’ tongues would have been removed during the embalming process and replaced with gold so that they could speak to Osiris, the ancient Egyptian god of the underworld.

This is not the first time that mummies gold tongues have been unearthed at this site. Last year, a skull with a tongue-shaped ornament was discovered as well as a man, woman, and child who were also found with gold tongues.

According to the head of the Egyptian archaeology sector at the Supreme Council of Archaeology, Ayman Ashmawi, excavations at the cemetery indicate that it was used during three distinct time periods. As archaeologists dug through different levels, they noticed changes in burial customs. Notably, there were different directions of burial as well as varied ways of placing the bodies.

Qewaisna was first discovered in 1989, and has been excavated several times over in the past decades since. Ptolemaic and Roman period structures have been found there.