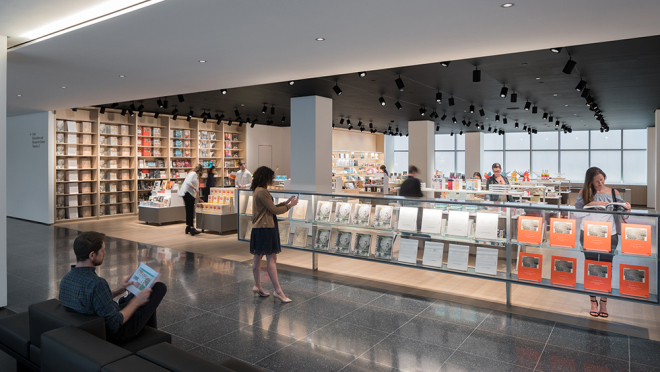 To shop at the Museum of Modern Art in New York doesn’t actually require you to go there. Only one of MoMA’s stores is in the museum itself. The others—five more—are as near as across the street and as far-flung as Kyoto. They’ve become important hubs on their own. Brands have even used the outposts as a springboard for entry into new markets: Both Muji and Hay celebrated their Stateside debuts at shops in MoMA’s SoHo location. That’s not to neglect the in-museum offering, which, after MoMA completed its redesign last October, totals 5,300 square feet and now has a more public-facing placement. “They took a stand when they moved their store down to the main area, where you can see it from the street,” says Susan Tudor, president of the Museum Store Association (MSA). “That really said a lot to everyone.” Statement-making it may be, but MoMA is not the only museum that has grand plans for its shop(s), though rest assured the Keith Haring chess sets and Yayoi Kusama purses are all certifiably MoMA exclusive.

According to data from Tudor’s MSA, museums collect 5 to 25 percent of their annual revenue from stores. The San Francisco Museum of Modern Art, for instance, reaped a net $6.1 million in store sales for the 2018 fiscal year, which was roughly 7 percent of its total revenue, according to tax filings. Smaller museums have leaned on the benefits of a strong store as well. The shop at Craft Contemporary in Los Angeles contributes $130,000 to the bottom line, or about 12 percent of the museum’s $1.1 million revenue stream. But the numbers weren’t always so healthy. “The business model is definitely changing—that’s really accelerated in the last five years,” says Diane Drubay, founder of We Are Museums, an organization that promotes networking and collaboration among museums. “With less and less public funding, shops are a huge opportunity.”

But those sales numbers didn’t happen overnight. In recent years, museums have significantly increased the square footage devoted to gift shops, even establishing a revolving door of temporary retail spaces inside the main buildings themselves. For most, that looks like a pop-up store within a special exhibition filled with merch associated with the artwork and often placed at the exit of the show so that visitors are funneled directly through it, à la some rides at theme parks like Disney and Universal. “At any one time, we can have 16 shops,” says Carmel Allen, CEO of Tate Commerce. “If you look at the exhibition stores and the main store, we’re at about 22,000 square feet.”

Product offerings also had to get smarter. T-shirts, books and snow globes will always exist, but in the words of Murray Moss, a museum-store consultant and the founder of Moss, a now-defunct design gallery shop which is credited with pioneering the shop-museum relationship: “The refrigerator magnet can’t do it alone.”

Kit Grover knows this better than anyone. The artist turned product designer has worked on a Grayson Perry necklace, a Yinka Shonibare tea set and everything in between, brokering the oftentimes tricky marriage between artist and bauble. It’s not always as sticky as it sounds, though: Some artists have fully taken the reins in the transaction. “Damien Hirst once asked us to create merchandise for him,” Grover says. “He was doing an exhibition in every Gagosian on the planet, all opening on the same day. At the time, he also had a shop of his own. Of course, we also do things with him for museums.” Also new to the gift-shop circuit, Grover notes, is the art object and limited-edition pieces, which appeal to a more discerning clientele than the workaday plushie or pencil case. The Museum of Contemporary Art in Los Angeles even has a targeted mailing list for upper-level donors who are notified when these offerings—many of which sell for thousands—go live. “It’s a certain clientele, the same way any high-end fashion store has folks who want to be the first to buy the next season of clothes,” says Andrea Urban, director of retail operations at MOCA. “We’ve been pretty successful. People who do collect these definitely have repeat purchased.” The Tate’s newest retail shop, Tate Edit, has been at this since 2016, and in January unveiled a collection of unique ceramics by Lubaina Himid starting at $4,100. The New Museum’s one-of-a-kind offerings include a handful of crystalline Yankees caps by Daniel Arsham and a limited run of a Raymond Pettibon print. It’s a juicy enough prospect that a few budding artists have sought the opportunity out, as Hirst once did. “We thought it would be a really great way to get our pieces out to the public,” says Chris Klapper, an installation artist whose artwork Pi Project, which she created with her husband, Patrick Gallagher, was sold at the Whitney through the museum’s affordable-artworks program. “I’ve never shown at the Whitney. After I wrote to them, they asked us for the retail price of the pieces. They bought everything up front for 54 percent of that number, and then sold the pieces at full retail price in the store. It wasn’t based on sales. They told me, though, and they’re very adamant, ‘Don’t lose money on it, this just happens to be what our cost breakdown is.’ But it’s a lot.”

Naturally, Klapper’s story and the fact that museums like the Tate are selling a Phyllida Barlow sculpture for $24,000 (untitled: catch 4) at their stores has ruffled some feathers. “If they keep doing this, what’s separating them from the commercial galleries? They’re kind of taking from that,” says Yuha Jung, a professor of arts administration at the University of Kentucky. “Museums need to be careful how they’re seen. If it’s too commercial or too in your face, then that’s not good.” Another sticking point is that shops have become a destination in their own right, so much so that they detract from museum foot traffic, as many visitors will simply scope out some artful merch and leave without ever buying a ticket.

Not everyone is down on the trend. “That’s basically nonsense,” says James Bradburne, the general director of Pinacoteca di Brera in Milan. “In fact, I hope people come to the shop. I hope they come every weekend. A shop is a legitimate expression of a museum—and that’s a good thing. When I was the director of the Museum of Applied Arts in Frankfurt, I remember the curators came to me and said, ‘We have to close the shop. People don’t go to the exhibitions.’ I’d say, ‘Guys, don’t criticize the shops. If our exhibitions aren’t interesting enough to compete with the shops, then I think we need to make better exhibitions. Don’t shoot the messenger.’” Perhaps Klapper was wise to showcase her artworks at the Whitney shop rather than pursue placement in the museum itself. For better or for worse.

The search for new revenue in museums doesn’t end at shops. If you paid a visit to the restaurant Terzo Piano last January, then you might have sampled a salad dubbed Flowers, a colorful mix of roasted veggies and arugula. While eating, you’d have spotted multiple artworks on display, because, as it happens, this eatery is in the Art Institute of Chicago and your dish was named for the Andy Warhol series of the same name—which, not so coincidentally, was being shown elsewhere in the museum. “It’s as much a gallery space as it is a place to eat,” says Andrew Simnick, the museum’s senior vice president for finance, strategy and operations. “Our audience comes from all over the world, and our goal is to provide visitors with an experience that meets their needs. The dining program is just one aspect of that.” To Simnick’s point, it’s true that, these days, visitors simply want more. Museums, just like any brick-and-mortar establishment, must now compete with digital forms of entertainment. Restaurants and retail, which offer a more holistic visitor experience, can help coax folks out from behind their screens and in front of the art.

Verōnika, the Roman and Williams-designed restaurant at the new Fotografiska museum in New York.  Courtesy of Verōnika

Take a newer museum’s strategy as a prime example. National Gallery Singapore, which is dedicated to modern Southeast Asian art, opened in 2015 with no less than 11 food and beverage offerings, among them a rooftop bar, an omakase restaurant and Odette, which is ranked No. 1 on Asia’s 50 Best Restaurants list. “We see it as a way to grow museum-going culture,” says Kola Luu, director of partnership development. “In Singapore, visiting a museum isn’t part of everyone’s day-to-day life yet, so having a broad range of food and beverage offerings is part of our strategy to bring the museum experience and art to the people.” Luu notes that along with funding from government and donors, business operations like Odette will be vital to the museum’s financial sustainability. In New York, recently opened photography museum Fotografiska is thinking along the same lines—though, notably, its status as a for-profit institution will cause its revenue streams to differ—opening its doors armed with Verōnika, a glamorous grand café that marks the latest entry in famed restaurateur Stephen Starr’s oeuvre, complete with interiors by Roman and Williams. It’s all enough to make Andy Warhol’s words strike an eerily prophetic chord: “All department stores will become museums, and all museums will become department stores.” Words best mulled over a plate of Flowers at Terzo Piano.