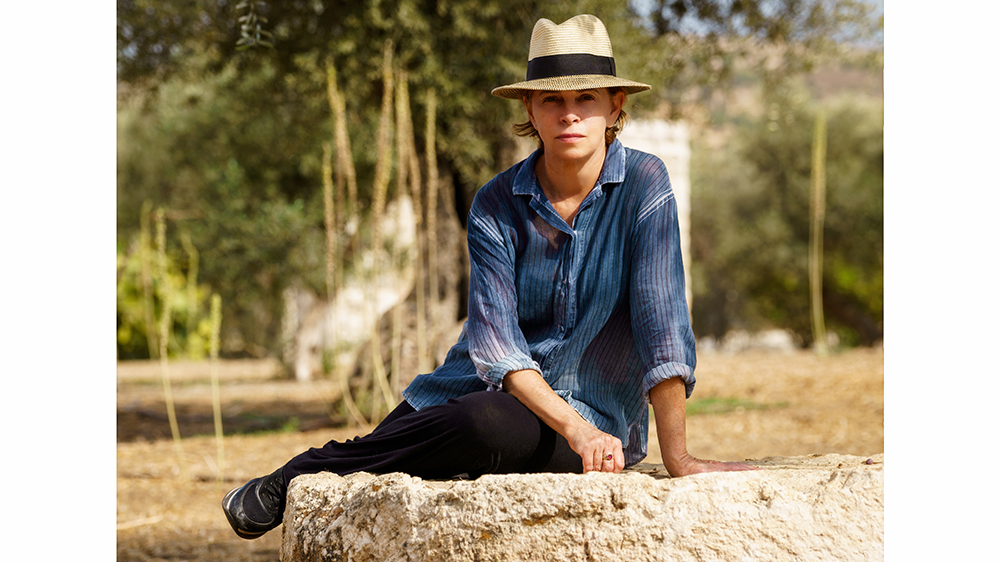 Insofar as a studio is a space for an artist to contemplate and to create work, Michal Rovner’s studio is her farm, located in a village between Jerusalem and Tel Aviv. “I start every day in the field, very early, 5:30,” she says at the end of a clear autumn afternoon. Sometimes she picks poppies or beans—she loves the shape of the legumes when they’re dried—but mostly, she says, “I’m looking,” whether at her large plot, surrounded by olive trees and planted with a fig, pomegranate and orange orchard, or at her three white donkeys. “The field is very simple. It’s kind of a dialogue that I have with my longing for the Canaan landscape, you know, the old, original landscape of Israel.”

That landscape, both natural and built over millennia, has long nourished Rovner’s work, and she has returned the favor. “My mother said that the landscape which I constructed here is my best work of art,” she says with evident pride.

Nature, as well as the present dangers posed both to and from it around the globe, was the starting point for her latest body of work, which will be shown at Pace Gallery in Palm Beach, Fla., in an exhibition opening December 17. “Current Climates” is a series of videos that, digitally stripped down to erase identifying details, appear like painterly abstractions of small figures trudging through barren, burning or watery terrain. “When I was making the work, [there were] the floods in Europe, then all the fires in Greece, in Turkey, in California, then in Israel,” she recalls. “I was standing here, and I was watching the smoke coming from the hills of Jerusalem. These experiences went into the work and made them more intense. There was this sense of heat.”

Rovner is sitting on her patio, shaded by a sukkah, a traditional shelter consisting of a fabric roof held up by tree-branch poles. Behind her are three Makom sculptures. After being constructed there with the help of an Israeli and Palestinian crew from 60 to 70 tons of stone each, two were then disassembled, shipped to Paris and rebuilt at the Louvre opposite I. M. Pei’s iconic pyramid in 2011 before the process was repeated in reverse. “Makom” is Hebrew for “place,” and, in a poignant reference to the region’s ancient and lasting strife, the stones were salvaged from destroyed homes on the West Bank, on the Syrian border and in Israel.

A sense of place is inextricable from Rovner’s work. Her country’s landscapes “echo entire history, a very dramatic history that I feel a part of,” she says, noting that biblical associations and archeological artifacts are layered into the region’s contemporary environment, including on her own farm, where she regularly finds pottery shards dating to the reigns of the Old Testament kings David and Solomon. “You feel you are connected. I am aware that I have roots. I see the continuation of time here.” Yet, though she describes her art as dealing with “questions of identity, of place and often time,” she emphasizes, “my work is not about this place. I try to take it to a broader place.”

“People always ask me, ‘Who are these people? Where is this place?’ ” she says. “It could be anybody. These landscapes really are about the human condition.”

Rovner with some of the stones she uses in her work.  Jordan Polevoy

Even her pieces seemingly about animals have more to do with humanity. In 2016, Rovner made a haunting series featuring jackals, capturing the elusive desert creatures using night-vision equipment, in part as a metaphor for the refugees streaming out of Syria and parts of Africa who are often feared as the “other” the way jackals have been historically. The aesthetic beauty of her art is a lure, she notes, like an appetizer. “Then I just serve them another dish, so to speak,” she says of a deeper engagement with the work.

As we talk via Zoom, the light quickly fades, leaving a luminous moon hanging low over the field. Two of her six dogs, half of them adopted from the wild, wander in and out of the camera frame. “I always wanted to have a wolf,” she says. Rovner, who has also long had a studio in New York City, has relished her extended time on the farm during the pandemic. From the eve of lockdown, when a storm felled seven old cypress trees, through a heat wave that brought crows in search of water, she took time to reflect and to film a hawks’ nest, which could evolve into her next project. “I’m very lucky,” she says, “because I have a very big field.”