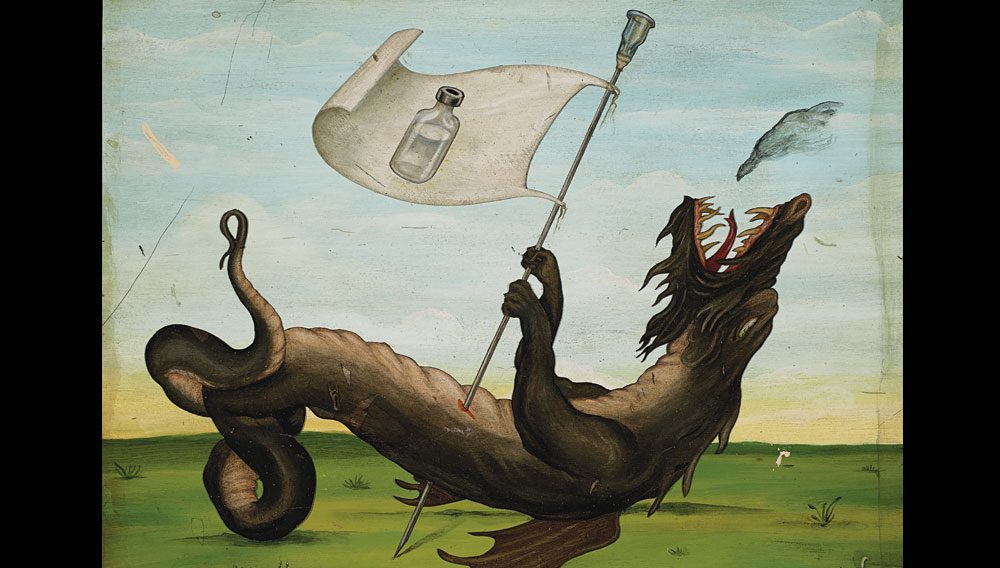 The scientists and physicians invited to the April 12, 1955, meeting at the University of Michigan in Ann Arbor to hear the results of the 1954 field study on the polio vaccine created by Jonas Salk, MD, had a notion that the news would be good: The invitations were engraved, and they came with offers of hotel rooms. Certainly such a fuss would not have been made if the vaccine were a dud. In fact, Dr. Salk received a standing ovation even before approaching the podium when Thomas Francis Jr., MD, director of the Poliomyelitis Vaccine Evaluation Center at the university, introduced the study and detailed how the vaccine was up to 90 percent effective against the three strains of polio. “The vaccine works,” he proclaimed. “It is safe, effective, and potent.”

The revelation was one of those rare moments when life resembles a scene from a movie. Millions of American parents and children rejoiced. The menace that had turned summers into seasons of terror, ruined so many legs and bodies, sent thousands to their deaths, and crippled a president was defanged. But young Walter Orenstein, then in second grade, was not thrilled about submitting to the needle and shared his misgivings with his mother. She told him, “Better you should cry than I should cry.”

Vaccines have done more to shift the balance of tears than virtually every other medical advance humankind has achieved, and, as an adult, Dr. Orenstein also devoted himself to the task. He directed the national immunization program at the Centers for Disease Control and Prevention (CDC) from 1988 to 2004; served the Bill and Melinda Gates Foundation as its deputy director of immunization programs from 2004 to 2008; and is now a professor and associate director of the vaccine center at Emory University in Atlanta. In November 2013, the New England Journal of Medicine published a paper that analyzed more than 100 years of medical reports and estimated that 103 million cases of serious childhood infectious disease had been prevented by vaccination in the United States since 1924.

Vaccines have created a world that our ancestors could only long for. “If you went to a cemetery in the 17th century or the early 18th century, you would find lots of graves of small children,” says Paul Offit, MD, director of the Vaccine Education Center at The Children’s Hospital of Philadelphia and the author of several books on vaccination and its history. “Children routinely died of measles and diphtheria, but it is dramatically different today.” Dr. Offit adds that vaccines should receive much of the credit for the increases in longevity seen in the 20th century. “I think most of it can be attributed to vaccination,” he says.

The tide began turning in humanity’s favor in the late 18th century, when physician and scientist Edward Jenner pursued something he had learned at the age of 13 from an ailing milkmaid in Chipping Sodbury, England, who told him her profession safeguarded her from smallpox. Dairymaids’ hands inevitably came in contact with the blistered udders of cows that had cowpox, and that somehow seemed to protect the women against the far more fearsome illness of smallpox, which covered the victim’s entire body with lesions that would leave disfiguring scars or blind those whom it failed to kill. In 1796, Jenner decided to test the truth behind the folk wisdom. He injected 8-year-old James Phipps with matter from a milkmaid’s fresh cowpox lesions, waited six weeks, and then deliberately exposed the child to smallpox almost two dozen times without him falling ill. The word “vaccine” contains hints of its bovine origins; it derives from the phrase variolae vaccinae, which translates to “smallpox of the cow.” Though it took 181 years, vaccination ultimately eradicated smallpox, which is believed to have killed half a billion people worldwide; now the disease exists only in a handful of laboratories.

Though Dr. Salk is the best-known vaccine scientist, he was one of many whose work combatted scourges with a syringe. Maurice Hilleman, PhD, an American researcher employed by Merck, created or improved at least 25 vaccines, including nine of the 14 that are currently recommended for children in the United States. He died in 2005, at the age of 85, before he could try an experimental self-made inoculation developed from proteins drawn from the cancer cells that ultimately ended his life.

Still, Dr. Salk had his critics and his crises. Albert Sabin, MD, who created an oral polio vaccine in 1962, rarely missed a chance to decry Dr. Salk’s reliance on a killed polio virus instead of a live, weakened one. Dr. Sabin was unmovably sure that only a live polio virus could provoke the human immune system into producing the antibodies that would provide lasting protection; a dead one, in his opinion, would be too feeble. Dr. Salk also confronted the specter of an earlier generation’s disastrous attempts at a polio vaccine. In the mid-1930s, two rival preparations went to field tests in children: One, developed by John Kolman, MD, of Temple University, was based on a live virus and given to 10,000 subjects, and the second, created by a pair of physicians, William Park and Maurice Brodie, relied on a dead virus and was administered to 9,000. To the horror of all involved, the Kolmer vaccine actually caused polio in nine recipients, and the Park-Brodie vaccine infected three, as well as sickening more who reacted to the monkey tissues in which the serum was developed. But the most persistent bedevilments that Dr. Salk faced were anti-vaccination cranks who played on the public’s anxiety about being injected with either a live or dead virus.

Anti-vaccinationists have been around as long as compulsory vaccination programs, but today’s critics have taken on a new complexion. Largely due to their efforts, vaccination has become a victim of its own success in especially grotesque ways, with outbreaks of measles and whooping cough striking areas populated with vaccine-skeptic parents who claim religious or philosophical exemptions to vaccinations otherwise mandated for their school-age children. Speaking about celebrity Jenny McCarthy, an anti-vaccination advocate who, coincidentally, was born the same year that routine smallpox inoculations ceased in the United States, Dr. Offit says, “When she says that given a choice between autism and measles, she would take the measles every time, that tells you how successful vaccinations are. Not only have we largely eliminated these diseases, we have eliminated the memory of these diseases. It is a very successful program, but we are paying for that success.”

Perhaps anti-vaccine sentiment will shift when pending scientific research claims victory over a frightening modern disease. Work continues on inoculations that combat the human immunodeficiency virus (HIV), which causes AIDS; hepatitis C; malaria; methicillin-resistant Staphylococcus aureus, the virulent staph infection known as MRSA; and a permanent influenza vaccine, which would eliminate the need for annual boosters. There has even been heartening progress on a personalized vaccine that attacks the nastiest known type of brain tumor, which has proven invulnerable to chemotherapy and radiation. A study of a vaccine for glioblastoma multiforme (GBM), the disease that took the life of Senator Ted Kennedy, showed that the participants lived longer compared to other sufferers who did not receive the remedy. Each patient was injected with a custom preparation made from tissue cut from his or her tumor. Much less fearsome but exceedingly prevalent, the rhinovirus, or common cold, will likely elude vaccination researchers for some time yet, because there are more than 100 distinct types of the virus.

An immunologist, Vincent Tuohy, PhD, at the Cleveland Clinic’s Lerner Research Institute in Ohio, might be the scientist whose work delivers a headline-grabbing breakthrough. In 2015, he expects to enter the first phase of clinical trials on an inoculation that could prevent breast cancer. Like the vaccine that Hilleman did not have a chance to test personally, Tuohy’s breast cancer vaccine affects proteins rather than viruses or bacteria. If it works, it would not be the first vaccine to block cancers in humans; that distinction belongs to those that fight hepatitis B and the human papillomavirus (HPV). The original hepatitis B vaccine protects against liver cancer and was approved by the Food and Drug Administration (FDA) in 1981; the first HPV vaccine, dubbed Gardasil, gained approval in 2006 and Cervarix followed in 2009. The latter two aim at sexually transmitted viruses that cause most cervical cancers and also target genital cancers in both sexes. But a breast cancer vaccine would be gratefully embraced: American women have a one-in-eight chance of suffering breast cancer in their lifetimes. Tuohy’s preparation targets proteins that should not appear in healthy breast tissue after a certain age. These same age-linked proteins are seen in so-called “triple-negative” breast cancer, the most virulent form of the disease. “It causes 17 percent of breast cancer, but well over 40 percent of the deaths,” he says. “If you have a vaccine that prevents breast cancer, you want it to prevent the most lethal form.” If the three trial phases generate good results, Tuohy’s breast cancer vaccine, intended for women ages 40 and older, could receive FDA approval by 2023.

If the vaccine succeeds, it could lead to more research that aims to expunge novel villains. “I want to harness that power to focus on proteins that are no longer expressed,” Tuohy says. “I want to see if we could prevent diseases that are thought to be not preventable. Theoretically, it could work if we can find the right target.” The prospect of an engraved invitation to a victory-over-breast-cancer announcement has likely gone the way of smallpox, but the celebratory tweets and hashtags would inevitably be heard ‘round the world.

A pox on plagues: An historical timeline of vaccines

Around 10,000 BC  Smallpox is speculated to have begun striking down human victims.

1885  Louis Pasteur injects an experimental rabies vaccine into a 9-year-old Joseph Meister, who had been attacked by a rabid dog. Meister recovers, making Pasteur’s preparation the second successful vaccine.

1898  Martinus Beijerinck launches the field of virology when he shows that two different agents can cause disease: bacteria and viruses. The distinction proves crucial to the development of vaccines.

1901  The first Nobel Prize in Medicine is awarded to Emil Adolf von Behring, whose work paved the way for a diphtheria vaccine.

1907  Suspecting household cook Mary Mallon of causing deadly typhoid outbreaks, New York public health officials apprehend her to perform needed medical tests. Mallon did not go quietly. A health inspector wrote of collaring Mary: “I literally sat on her all the way to the hospital; it was like being in a cage with an angry lion.” Mallon entered legend as Typhoid Mary and died in quarantine in 1938.

1918  An influenza pandemic infects an estimated 500 million people and kills 20 to 50 million.

1949  The United States sees its last case of smallpox. Also, the DTP (diphtheria, tetanus, and pertussis) vaccine, the first to combine several vaccines in one injection, is licensed.

1979  The World Health Organization (WHO) certifies that smallpox is eradicated, making it the first infectious disease eliminated worldwide by vaccination.

2025  Before he died in 2005, vaccine researcher Maurice Hilleman, PhD, predicted that the next influenza pandemic would occur in this year and be caused by the H2 strain of the virus.