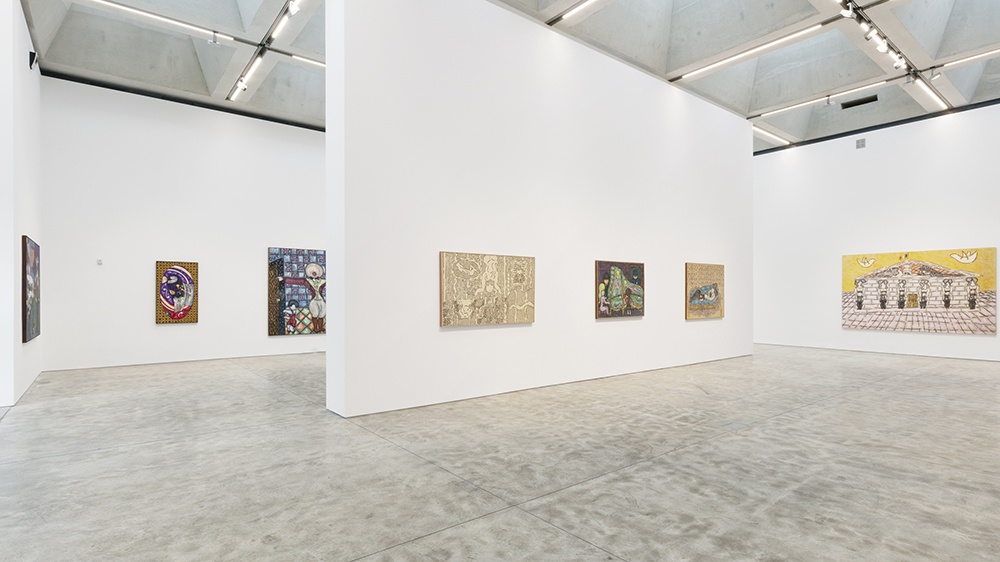 In mid-March, as the coronavirus pandemic brought New York to a standstill, many galleries had to shutter for a month-long period. Now, as New York City’s reopening continues apace, those art spaces are beginning to reopen their doors with increased safety precautions. Many ask visitors to book appointments online before stopping by, and some have taken extra precautions of other kinds.

Galleries across the city have begun to implement Acuity Scheduling’s digital appointment system, which many have started using on their websites. Among those using the system are Chelsea galleries Kasmin, Greene Naftali, and Galerie Lelong & Co., as well as the Lower East Side’s Derek Eller Gallery and Tribeca’s James Cohan. But for most, a digital system wasn’t enough to reopen as the city moved into Phase III of its reopening—changes to the physical layout of the gallery had to be made as well.

James Cohan has installed a Plexiglas window around its reception areas at both of its locations, and is now requiring visitors to give contact information when they arrive. It was among the earliest to reopen on June 23, so that people could see its Firelei Báez show, which was extended because of the closure and closed on July 2. (The gallery is currently installing a solo show of Grace Weaver at both of its locations, which opens July 15.)

“There was a great sense of ebullience from our visitors, who were finally seeing these paintings up close and understanding the scale and tactility of the work,” Cohan said of the Báez show in an interview. “It was really important that people could see Firelei’s show because we felt that we serving the artist first and foremost. We’re grateful to everyone who’s making an effort to come because it means a lot.”

Kasmin, which has reopened with abbreviated hours, has also begun allowing visitors—and making changes to its business. Its online booking system lists around a dozen health and safety protocols that the gallery is taking; visitors must agree to keep in line with them when scheduling appointments, which are mandatory. Under the new guidelines, the gallery will offer gloves and hand sanitizer at the front desk, limit the amount of visitors to the gallery to just three at a time, and screen staff before they enter the gallery. All visitors are expected to wear masks.

“There’s a feeling of caution, but also rebirth and renewal,” said Kasmin’s managing director Nick Olney. “To start to come back together slowly feels wonderful, but we all know that we have to take each day one at a time and be really cautious.”

The app See Saw, which lists the majority of gallery exhibitions happening throughout New York City, has become crucial in bringing visitors back to art spaces. In mid-March, as the pandemic was beginning to force a shutdown, See Saw was already in the works of adding a feature that would allow visitors to email the gallery to set up an appointment. Now, that feature is automated, allowing visitors to make appointments with ease.

“It’s really daunting for people who don’t have a relationship with gallery,” Ellen Swieskowski, See Saw’s cofounder, said of having to email a gallery. “We wanted to make it easier for the casual visitor to come see a show, without all the back and forth that emailing entails.”

Swieskowski likened the gallery-appointment system to Open Table, a popular website that allows user to make reservations at restaurants, and said that she sees this feature as a key one for galleries going forward. “It’s going to come into play a lot more,” she said.

Already, some are yearning for the day when an appointment system is no longer needed, however. Martha Fleming-Ives, a director at Greene Naftali, said that her gallery hopes that appointments are a “temporary measure.” And dealer Casey Kaplan, who runs a space in the Flower District that also reopened by appointment, said that he understands that not all visitors will be comfortable with the guidelines in place. “We will continue to engage and connect with the community through our new online initiatives, in addition to in-person visits,” he said.

Safety has come first for most New York gallerists. In an email, Mary Sabbatino, vice president and partner at Galerie Lelong & Co., said that, since it reopened on June 30, the gallery so far hasn’t had “more visitors than we could host safely” to its Kate Shepherd show. She added, “Of course the 4 or 5 visitors we are seeing daily are far less than pre-Covid, even in the summer, but they are each even more precious to us. Everyone seems happy to see art in person, and we’re happy to talk about art to people in person and not on Zoom.”

Not all galleries have been quite so strict, however. Dealer Derek Eller, whose namesake gallery is on Broome Street, said that his gallery had not made appointments mandatory for visitors. “If someone shows up to the door and is wearing a mask, and there aren’t too many people inside, we’re happy to let them in,” Eller said.

Still, the gallery has received on average about four visitors a day; they’re mostly curators and artists so far. “New York City in July is never busy and then you put a pandemic on top of that—it’s pretty quiet,” Eller said.

Peter Freeman, Inc. in Tribeca has not required appointments for its visitors to see the gallery’s reopened solo show of Matt Mullican, but it has limited the number to five at any given time, which its owner Peter Freeman said was “quite conservative for the size of our space.”

“We wanted to let people visit spontaneously,” Freeman said in a phone call. “We didn’t expect an overwhelming number of visitors, and so far, it hasn’t been a problem. It didn’t make any sense to be discouraging to anyone by making them jump through another hoop that most likely wouldn’t be necessary.”

Freeman continued, “For us, reopening has been important for us because this gallery defines so much of what we do by the personal interaction with real works of art. To be open is fundamental to us.”

Now, many gallerists are bracing for the possibility that New York galleries will continue to function this way for longer than some had initially thought. Eller, who tentatively plans to open an Alyson Shotz show on September 10, said, “It’s hard to know if we’ll get a proper fall this year.”