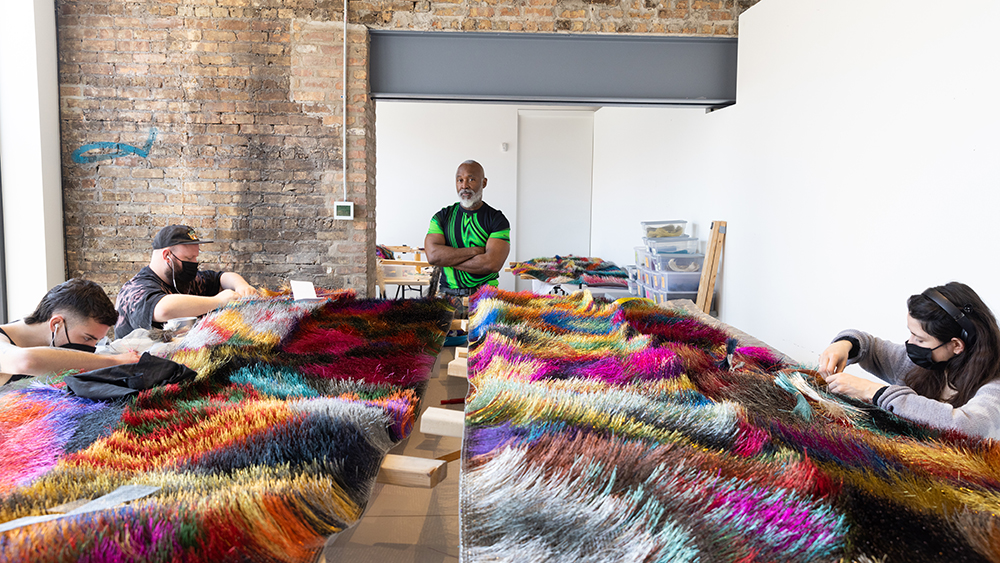 Back in 1991, after the Los Angeles police beating of Rodney King, Nick Cave started to create the first of what would become his celebrated series “Soundsuits.” Distraught over the racially induced violence, Cave, a Black man, designed the wildly imaginative, wearable sculptures to serve as metaphorical armor, cloaking the full body and disguising the race, gender, class and age of the performers donning them. Twenty-nine years later, he was working on what he calls version 2.0, inspired by his teenage fantasies of what the new millennium would bring, when a harsh 21st-century reality intruded: A Minneapolis cop murdered George Floyd.

“That created this veil, this shroud,” Cave recalls from his Chicago studio, a former factory that once produced curtains and, before that, football helmets. “There’s always been disruption—George Floyd, Michael Brown, Trayvon Martin. I mean, the list goes on and on.” But this time, he changed direction from the outwardly joyful riot of color and texture that defines his previous pieces. “You can feel this sense of sadness and despair. But underneath, you get this glimpse of something even more exuberant and more elaborate.”

The “Soundsuits,” both old and new, are sure to be highlights of a trifecta of hometown honors for Cave in May: a three-decade retrospective at the Museum of Contemporary Art Chicago; a public work displayed on the enormous art deco landmark theMart; and a gala at the DuSable Museum of African American History featuring a choreographed fashion presentation designed in collaboration with his brother Jack.

Cave moved to his sprawling studio in the city’s Old Irving Park neighborhood about four years ago. Dubbed Facility, it serves as live-work space for the artist and his partner, Bob Faust, as well as his brother. “I’m working sometimes until three in the morning—I’m not getting in the car and driving home,” he says. Cave converted a rear parking lot into a green space and restored street-facing windows to create a storefront project room visible to passersby. After Floyd’s murder in 2020, the studio invited friends to write letters about racism directly onto the windows for a project called Amends and the broader community to express their thoughts on yellow ribbons, which were then hung on clotheslines on the lawn of a high school across the street for Dirty Laundry; 1,200 people took part.

After more than 30 years on the faculty of the School of the Art Institute of Chicago, Cave continues to teach master’s candidates, relishing the opportunity to commune with “up-and-coming creators,” he says. “We have two years for them to understand how to trust themselves.” His own grad-school experience in the late 1980s, at Cranbrook Academy of Art in Michigan, was pivotal to developing his self-confidence. He finished his thesis paintings a month early but soon decided that he wasn’t happy with them. “My peers were like, ‘You are nuts,’ but it just wasn’t what I wanted,” he recalls. “It wasn’t challenging.” He quickly started fresh, creating an installation and performing within it.

That integration of choreography (Cave had studied dance with Alvin Ailey’s company) presaged his “Soundsuits,” which swish, jingle and click when inhabited. His presence at Cranbrook as the sole student of color also galvanized his direction. “I didn’t feel unsafe,” he says. “But it was a very awakening moment.” Three years later, King’s beating pushed Cave to respond. He began collecting twigs in a park and brought them back to his studio, where he assembled them into a sculpture, then realized he could wear it like a shield.

Those who don’t know that painful backstory, however, might be more likely to see “Soundsuits,” which are stitched together from such disparate materials as raffia, vintage sweaters and quirky flea-market finds, as whimsical, even celebratory. “That expression is how we move through life. I’m talking to you right now, but I am also struggling with the pain of this war,” Cave says, referring to Russia’s invasion of Ukraine. “But you would never see that on the facade. I have to find reasons to get up in the morning.”

The retrospective, Nick Cave: Forothermore, will open with Spinner Forest, an installation of 16,000 wind spinners dangling from the ceiling that serves as a lament about gun violence. “You think you’re looking at all these amazing, colorful, bright, reflective lawn ornaments,” Cave says. “As you get closer, they’re guns, bullets and teardrops. We all may think it doesn’t pertain to us, but it’s right in our backyards.”

The survey will also feature his first bronze “Soundsuit,” which stands a monumental 12 feet tall (and is not wearable). It’s part of his quest to reach a broader viewership, as is his Art on theMart project: a “Soundsuits” performance projected onto theMart’s facade, though Cave says the digital piece will integrate the building, not simply sit on the surface. “This is really a dance with architecture,” he says.

Cave sees his practice as “art with civic responsibility” and his mission as bringing “light into the world” by starting conversations. “Art has always been my savior because the constant trauma around racism—I don’t know how people process it,” he says. “I am lucky to have this vehicle to bear all of this burden. Because it’s tough, it’s really tough.”