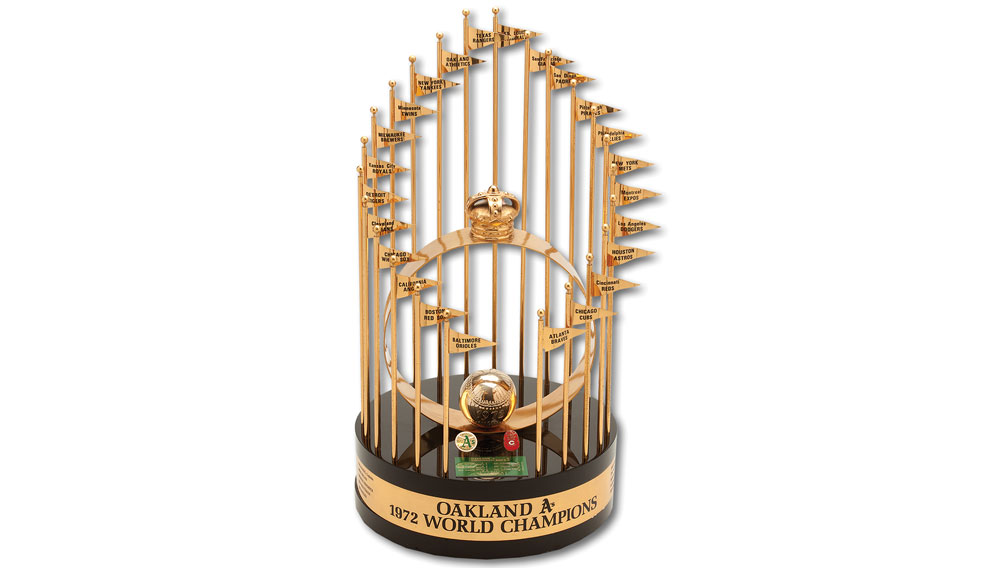 Long before the Moneyball days, the Oakland Athletics enjoyed a dynastic run of success in the 1970s, winning three World Series in a row. Under its eccentric owner Charlie Finley, the team stood out not only for its imaginative wardrobe combinations in “kelly green, wedding-gown white, and Fort Knox gold,” as Finley called the Athletics’ colors, but also for its colorful cast of players like Catfish Hunter and Rollie Fingers. One of those players, Gene Tenace, is releasing two items for auction that stand as bookends to the Oakland Athletics’ heyday from 1972 through 1974, when the team reigned supreme.

Tenace’s 25-inch-tall World Series trophy is from 1972, the year in which he began the baseball season as a backup catcher and ended up as the World Series MVP. His 14-karat-gold championship ring is from 1974, when he played first base for the A’s. The appropriately colored ring features Fort Knox gold and kelly green and sports a gold-edged shamrock with the “72/73/74” three-peat years and the winning equation, “S + S = S”: Sweat plus Sacrifice equals Success.

Estimate: $25,000 for the trophy, $40,000 for the ring; each includes a letter of authenticity from Gene Tenace. Sale: SCP Auctions Spring Premier, April 8 through 25; scpauctions.com