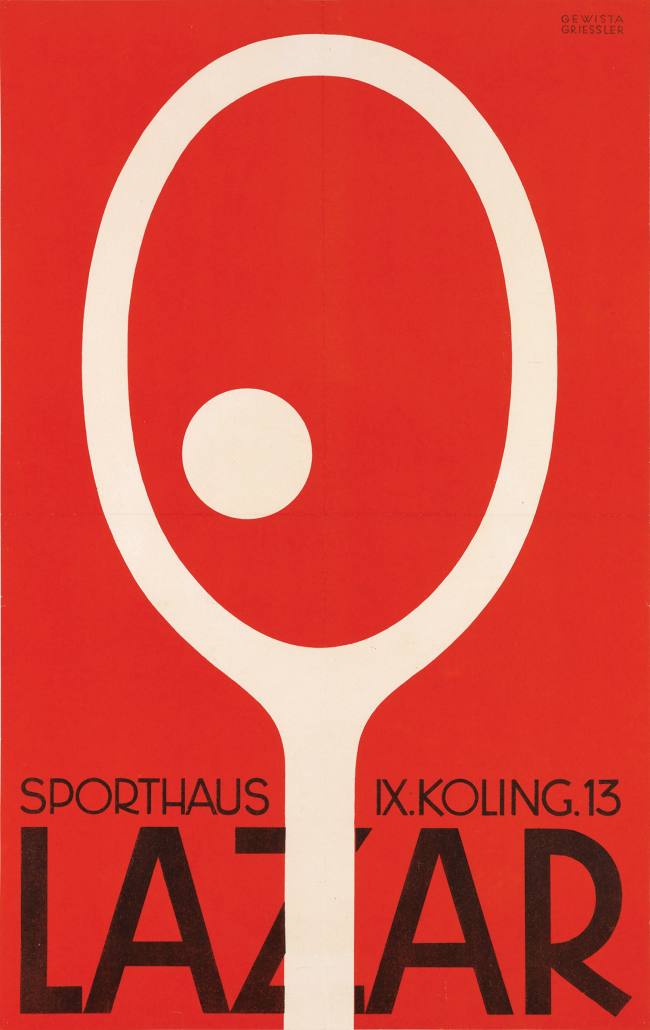 Tennis advertising has its own brand of topspin, and an assortment of 70 posters promoting the sport traces it for more than a century. The vintage images, from a private Australian collection, are believed to form the largest such grouping ever to come to auction and they date to the late 1890s, when the game was still in its early days. “The styles really changed,” says Nicholas Lowry, Swann’s president. “In the earliest posters we see some improbable outfits, including large white dresses and straw hats. We even see an image of a man smoking a cigarette in an ad for a sporting-goods store.”

A circa 1919 advertisement for a shop in Vienna corresponds to an era when the sport was becoming more mainstream, and the equipment and apparel more streamlined. The singular images also tout tournaments, equipment brands, and even hotels with tennis courts. Lowry says, “What makes collecting tennis posters difficult is that they’re so hard to find. If you love tennis, this is heart-palpitating stuff.” —Karen Cakebread

The barn-find phenomenon shows no sign of fading, and the latest evidence is this 1956 Lancia Aurelia B24S Spider America that will be offered by Gooding & Co. (www.goodingco.com) at the Pebble Beach Auctions on August 16 and 17. Designed by Pininfarina, the Aurelia was the first production car in the world to feature a V-6 engine, and the B24S Spider America was considered one of the most technologically advanced cars of the day with all-independent suspension and a combined gearbox and rear transaxle. Chassis B24S-1170 was discovered in an Oakland, Calif., garage, where it had sat undriven for 20 years. It will be offered in its current, unrestored condition, and is expected to sell for $900,000 to $1.1 million.  —Amanda Millin

The Aurelia Spider was just 1 percent of Lancia’s 1956 production run and only 240 B24s were made, with 181 in left-hand drive (S stands for sinistra, or “left” in Italian). Only 100 Spider Americas are believed to remain.

The B24S-1170 chassis, apparently sold new in the U.S., bears a Sports Car Club of America sticker on its original side curtains, Lancia and Touring Club badges on its radiator, and a U.K. plate from its time there in the 1970s and ’80s.

The Captain America panhead chopper that Peter Fonda rode in 1969’s Easy Rider will highlight Profiles in History’s September auction. And at the pinnacle of irony, this symbol of Woodstock-generation disillusionment has authoritarian origins: When Fonda and his Easy Rider director/costar Dennis Hopper were scrounging for props on a shoestring budget, they bought four motors from decommissioned police motorcycles. Those engines, says Joseph Maddalena, the auction house’s president and CEO, powered the motorcycles built by Cliff Vaughs and Ben Hardy for the movie. Two bikes were made for each of the film’s stars, but this is the only one known to remain; it carries certificates of authenticity from Fonda and the National Motorcycle Museum. After the movie wrapped, Fonda gave the bike to his friend Dan Haggerty, who was the film’s motorcycle wrangler and later achieved fame as Grizzly Adams. It was Fonda who had suggested painting the gas tank with the Stars and Stripes, and the bike went on to become perhaps the most

recognizable motorcycle of all time.  —K.C.

A series of fall auctions offering 100,000 bottles from the wine collection of Roy Welland is shaping up to be a blockbuster: It is thought to be the largest ever consigned for sale, as well as the largest collection of Burgundy to come to market, and is expected to fetch more than $15 million. Two-thirds of the bottles are from Burgundy; Welland purchased most of them upon release and stored the majority in Beaune, the region’s capital. Beyond the 2,000 cases of Grand Cru Burgundy, Welland is offering more than 500 cases of Tête de Cuvée Champagne; 50 cases of Giacomo Conterno Monfortino, Barolo Riserva; nearly 300 cases from the Riesling producer J.J. Prüm; and selections from California. Welland, a champion bridge player, owned New York City’s Cru, a restaurant that was renowned for its wine list. With collectors putting a premium on both Burgundy and provenance, it seems likely that Welland is once again holding a winning hand.  —K.C.

Origin Story: The “King of Cool” ordered the Ferrari while filming The Thomas Crown Affair in 1967, and took delivery while on the set of Bullitt.

True Colors: Although the car was originally painted metallic gold, McQueen had it repainted Chianti Red before taking possession.

Joy Rides: McQueen was frequently seen driving the Ferrari through the Hollywood Hills and to the set of Bullitt.

Sold: This was the only Ferrari in McQueen’s collection for almost five years, until he sold it to Guy Williams, star of TV’s Zorro and Lost in Space.

On the Block: Estimated at $9 million or more; blame the McQueen effect. August 15 and 16, RM Auctions, www.rmauctions.com

Origin Story: The crooner was second only to “the King” (Elvis Presley) in U.S. record sales when he purchased the Gullwing in 1955.

Joy Rides: Boone drove the Gullwing sparingly. He joked that while it was a fantastic machine, it was an ordeal to climb in and out of it.

Continues on the next page…

Pride of the Yankees

As an integral part of the New York Yankees’ “Murderers’ Row” batting lineup, Lou Gehrig did not disappoint at the 1928 World Series, hitting four home runs and batting in nine—the same number of RBIs posted for the entire St. Louis opposing team over the four games of the series. Each member of the 1928 Yankees team was awarded a premier Hamilton Piping Rock watch, and Gehrig’s is to be sold this month. The art deco–style piece is engraved “Henry L. Gehrig” on the edge of the case, and etched into the caseback is an eagle atop a shield and crossed baseball bats, and “Yankees 1928 World Champions.” The included leather strap shows the wear marks from wrapping Gehrig’s wrist, indicating that this was a treasured and well-worn possession. It runs, too.  —K.C.

continues on next page

Fire in the Forecast

Weather updates may be the reason people watch the news, but dating back to the first century BC in Athens, locals looked to their weather vanes, since wind direction figured heavily in such livelihoods as farming and fishing. A vane’s theme often matched the building it decorated, so this 82-inch copper example likely topped a 19th-century firehouse, according to Andrew Holter, a vice president and specialist at Christie’s. “Collectors love them; they’re sculptural,” Holter says of weather vanes. “Also, a whole group collects fire memorabilia, so this crosses the boundaries of folk art, modern aesthetics, and fire.” The horse-drawn fire-engine weather vane is from the estate of Edgar M. Bronfman Sr., who displayed it in the yard of his country home in Connecticut. Also in the sale is a group of vanes from the estate of Paul Mellon.  —K.C.