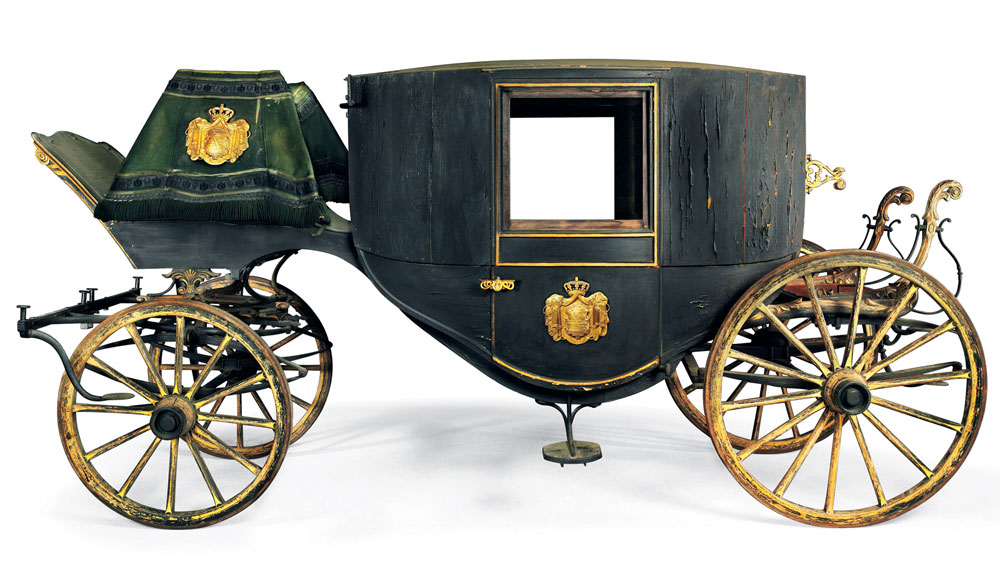 In 1870, King John of Saxony was ready for a new set of wheels. He commissioned a young Dresden coachbuilder, Carl Heinrich Gläser, to create a sweet town coach, a 14-foot wooden conveyance in green and black, his house colors. It was in use until 1918, when the German monarchy was abolished and the coach was moved from the royal stables to the Dresden Transportation Museum. It was parked there until 1949, when the German Democratic Republic seized it for the state’s collection. On April 30, the coach will likely come into private hands, when it is auctioned by Christie’s South Kensington (christies.com) as part of the European Noble & Private Collections sale. It is expected to fetch $30,800 to $61,600, a rather modest sum for a royal ride.

Opulent interior appointments include two hand-tufted benches in peach silk brocade, facing one another. Royal coaches were built deliberately narrow to be more intimate, seating up to two passengers on each bench.

Gläser became the royal coachbuilder for the House of Saxony, supplying 125 carriages and seven sleighs to the court until 1903. In the 20th century, the Heinrich Gläser company went on to build chassis for Maybach, Audi, and Mercedes-Benz.

The Royal House of Saxony’s coat of arms, in solid bronze gilt, depicts a crown-like chaplet of herbs over the kingdom’s striped shield. The insignia is also present in the upholstery trim and ribbon detailing.

While commoners crammed into stagecoaches seating eight or more inside and many more atop the roof, town coaches were luxury vehicles that aristocrats used for jaunts around town to attend the theater or visit other dignitaries.

Led by two horses, the carriage was driven by a single coachman. One or two footmen rode standing on the coach’s rumble, ready to smooth the way over ditches or puddles.

The World War II bombing of Dresden in 1945 left the city in ruins, but the royal town coach survived with only minor damage. After the war, the windows were replaced and three exterior side panels were repainted black.