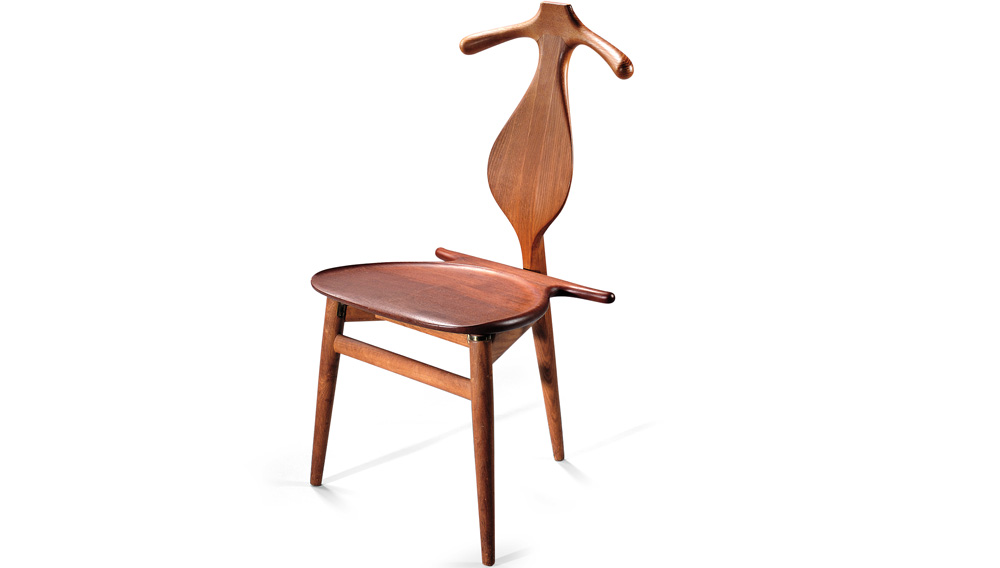 Of the dozens of iconic midcentury designs by Hans Wegner, perhaps none is as clever as the valet chair. The Danish designer imagined the piece as a stand-in valet for the modern gentleman, who could hang his coat on the back, sit to remove his shoes, and then lift the seat to fold his trousers over its winged top edge. Wegner’s first version had four legs—a design that he disliked but that sparked the interest of the king of Denmark, who immediately commissioned one. Wegner reworked it for two years before delivering a three-legged chair to the king in 1953. Wegner went on to mass-produce valets through 1981 with Johannes Hansen, a Copenhagen carpenter, and this particular teak, oak, and brass example, which was made by Hansen in 1958, will be offered in Skinner’s 20th Century Design auction. “This chair is not only ergonomic, but the design was well thought out,” says Jane Prentiss, director of the house’s 20th Century Design department, pointing to the chair’s hinged seat compartment, which stores cuff links, ties, and a wallet. The chair’s curved silhouette even alludes to its original inspiration: an actual person. “It’s almost like the skeletal structure of the human body,” she says, “in warm, organic wood.”