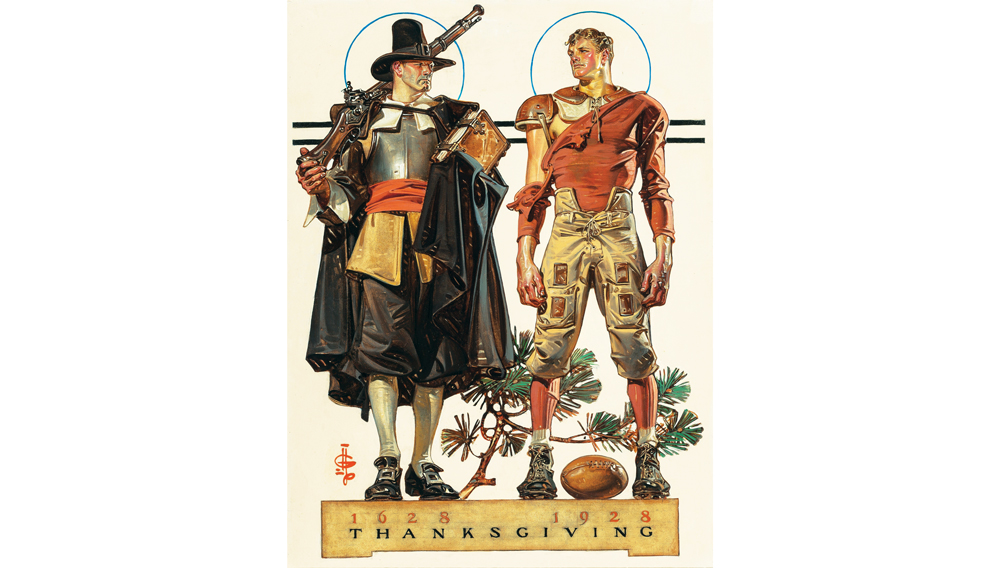 J. C. Leyendecker is finally emerging from his successor’s shadow.

Before Norman Rockwell there was Joseph Christian (J. C.) Leyendecker. From 1899 to 1943, Leyendecker created cover illustrations for 322 issues of the Saturday Evening Post—the same number of Post covers that Rockwell illustrated from 1916 to 1963. Rockwell grew up idolizing Leyendecker, whose work in the Post, other magazines, advertisements, postcards, posters, and books made him the most published popular artist of his era.

By the time of his death in 1978, Rockwell had achieved enduring fame, and his work was represented by galleries and exhibited in museums. Today, a Rockwell original illustration can command tens of millions of dollars. Leyendecker, whose influence on Rockwell’s work is unmistakable, died in 1951 at age 77, in virtual obscurity. When his longtime partner, Charles Beach, held an estate sale to disperse his archive of original illustrations, Leyendecker’s Saturday Evening Post covers sold for as little as $75 and studies could be had for a few dollars.

Lately, however, Leyendecker and his work are receiving their due. In November, Christie’s auctioned a 1918 Leyendecker Post cover of Santa Claus dressed as a World War I soldier for $209,000. And on May 2, Heritage Auctions will offer a 1928 Post cover that Leyendecker created for the tercentennial of the “First Thanksgiving” that depicts a pilgrim glowering at a football player. “It’s exquisitely well painted. The football player on the right is a classically beautiful American male that you see from Leyendecker,” says Ed Jaster, a senior vice president at Heritage. “There’s a bit of mirth in the painting.” The presale estimate is $100,000 to $150,000, but Jaster thinks it could sell for more than $200,000.

In addition to the Post covers, Leyendecker also illustrated advertisements for a number of menswear brands. His most popular creation was the Arrow Man (for Arrow Collars and Shirts), a Gatsbyesque paragon of style.

Leyendecker’s prolific work for menswear companies may have contributed to his falling out of fashion. “His style and association with high living, which made him the most important illustrator of his day, died away in the years of the Great Depression and World War II,” says Christine von der Linn of Swann Auction Galleries in New York.

He also toiled decades before his type of work was respected as an art form. “People were not collecting commercial artwork,” says Judy Goffman Cutler, the director of the American Illustrators Gallery in New York. “It wasn’t looked at as painting. It was seen as having served a purpose and was no longer valuable.”

But now Rockwell, the teenage fan who came to overshadow him, is helping to restore Leyendecker’s prominence while also elevating the overall perception of U.S. illustration art. “Rockwell’s bringing $46 million got a lot of people’s attention,” says Jaster, referring to the sum paid at a Sotheby’s auction in 2013 for Rockwell’s 1951 Post cover Saying Grace. “Other major auction companies are starting to include more and more illustrations in their American-paintings sales. Prices are high for all the top illustrators. More people are discovering illustration art and loving it. It’s a coming of age.”