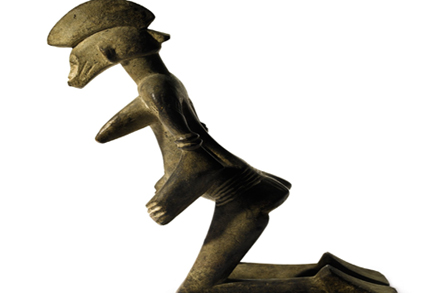 Early-20th-century American sculptor Chaim Gross was among the first collectors of African and Oceanic art in the United States, and many of his prized pieces will be on the auction block. On May 15, Sotheby’s New York will sell 81 lots from the Renee and Chaim Gross Foundation Collection, a compilation of rare and ancient African art assembled by the sculptor and his wife throughout the 1940s and 1950s. The Gross Collection’s most important pieces came from Frank Crowninshield, longtime Vanity Fair editor and cofounder of New York’s Museum of Modern Art. Crowninshield’s personal collection was the most comprehensive anthology of African and Oceanic art in existence before Chaim Gross purchased the entire collection through private acquisitions from 1940 through 1944.

Among the highlights of the sale is a Soninke hermaphrodite figure from Mali, believed to be from 12th to 15th century, and estimated to sell for between $400,000 and $600,000. The figure is one of only a small group of works that can be traced to a specific workshop in the western Sudan region. A Senufo kneeling female figure from the Ivory Coast, shown, is expected to sell for between $250,000 and $350,000. Totals from the sale are anticipated to exceed $4 million. (www.sothebys.com)