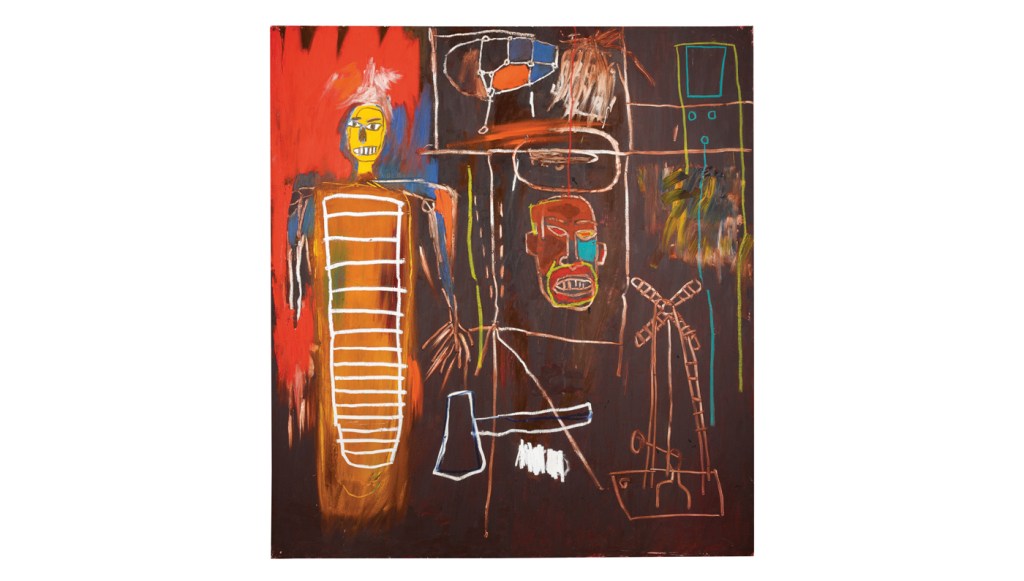 David Bowie hid his art in plain sight. The late British rock star regularly lent works from his extensive collection to major institutions—among them the Tate St. Ives in London and Manhattan’s Paul Kasmin Gallery—often with his name displayed on the wall next to them. Still, the announcement that Sotheby’s (sothebys.com) will auction roughly 400 pieces from his collection this month has come as a revelation to many.

“[Bowie’s collection] was done with passion, intellect, and wit,” says Sotheby’s specialist Simon Hucker. “Cost didn’t matter. He was just going for things that moved him.” The result is an eclectic assemblage that ranges from Georges Braque (whom Bowie references in his 1969 song “Unwashed and Slightly Dazed”) to Damien Hirst.

A top lot from the auction—which will take place in three parts on November 10 and 11—is Jean-Michel Basquiat’s Air Power, a 1984 canvas estimated to bring in up to $4.6 million. Bowie purchased it around the time that he played Andy Warhol in the 1996 film Basquiat. Hucker says that Air Power resonated with Bowie on many levels: “It was part of his wider lifelong interest in outsiders—and he loved the fact that Basquiat wanted to be a rock star as well.”

UPDATE, Nov. 11, 2016:  The first of the three Bowie auctions—the evening sale—has finished in London. It brought in a total of 24.3 million GBP, which xe.com translates to $30.4 million. All 47 lots sold. Air Power, the Basquiat mentioned above, sold for 7 million GBP, or $8.8 million, to become the top lot of the sale. It was also the most-viewed lot online.