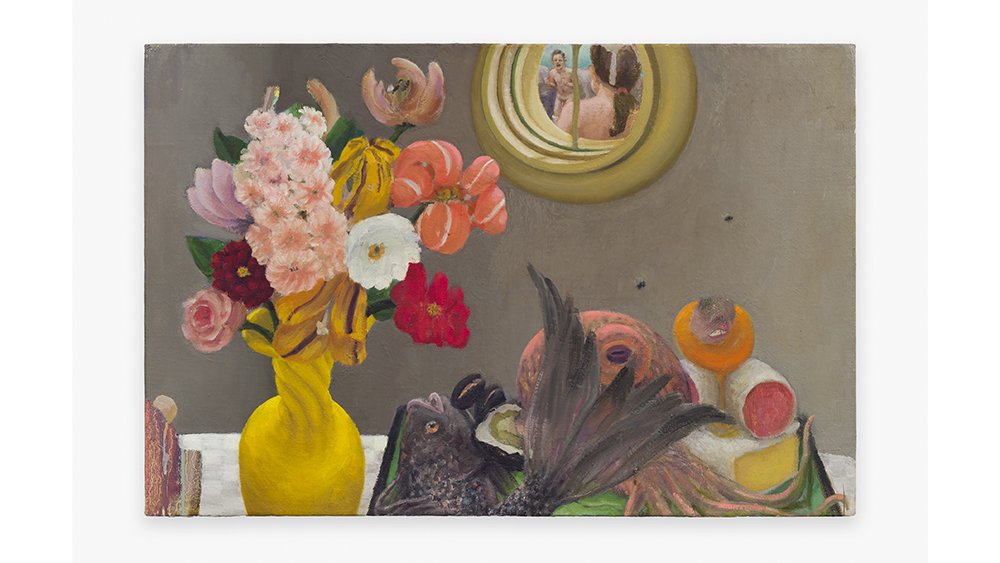 When the Covid-19 pandemic broke out in Manhattan, many of the city’s well-heeled residents decamped to vacation homes in the Hamptons. Now, as quarantine restrictions slowly lift, art galleries are following the money—opening new spaces in the tony community in an attempt to draw collectors. Pace Gallery, for instance, launched its temporary East Hampton outpost earlier this month—just a short walk away from Skarstedt Gallery’s new spot, which was unveiled in June. The latest, South Etna, will open its doors on July 16 with an exhibition curated by Alison Gingeras: “Painting is Painting’s Favorite Food.”

The brainchild of art dealers Amalia Dayan and Adam Lindemann—mega collector Lindemann owns Venus Over Manhattan on the Upper East Side; Dayan is a partner in Luxembourg and Dayan in New York and London—South Etna marks the married couple’s first joint venture. The gallery is in a Tudor-style cottage situated in the heart of Montauk Village, with a big white sign courtesy of artist (and neighbor) Julian Schnabel.

The debut exhibition takes a page from Danish artist Asger Jorn’s playbook and runs with it—he once said that “painting is painting’s favorite food.” (Ever the spitfire, he also told Harry F. Guggenheim to “go to hell with your money” when awarded the Guggenheim Prize in 1964, but South Etna’s exhibition won’t be riffing off that zinger.)

“By separating us from physical access to the trove of treasures we normally take for granted as accessible at museums and galleries, this unprecedented period of confinement has made us more aware of how much we feed on art history as part of our regular visual and intellectual diet,” says Gingeras. “This exhibition pays tribute to our collective need for the nourishment provided by art and art history.”

While artists consistently deal on some level with what preceded them, Gingeras’s exhibition consists of over 20 works that overtly take art history as muse. Betty Tompkins paints over a reproduction of Artemisia Gentileschi’s Susanna and the Elders (1610), covering the Susanna figure with pink text taken from a published account of a woman’s experience of sexual assault. Glenn Brown transforms François Boucher’s The Toilette of Venus (1753), casting the original figure in swirling hues of red, green and purple.

But the historical record isn’t always so obvious. Doreen Garner’s sculptures, for example, are amalgamations of a few different artist legacies, including those of Harmony Hammond, Paul Thek and Alberto Burri. Lyle Ashton Harris’s Untitled (Red Handcuffs) captures Caravaggio’s intensity, but doesn’t play off of any one of his works specifically.

More is still to come. Hauser & Wirth looks to unveil its Hamptons outpost mere weeks after South Etna’s debut, furthering the art world’s footprint in the region. And forget about that ancient tradition of Labor Day marking the unofficial end of summer and woebegone Hamptonites’ return to the city. Anticipating a slow return to normalcy, Pace, for one, has already announced programming through October.

See more of Painting is Painting’s Favorite Food, below: