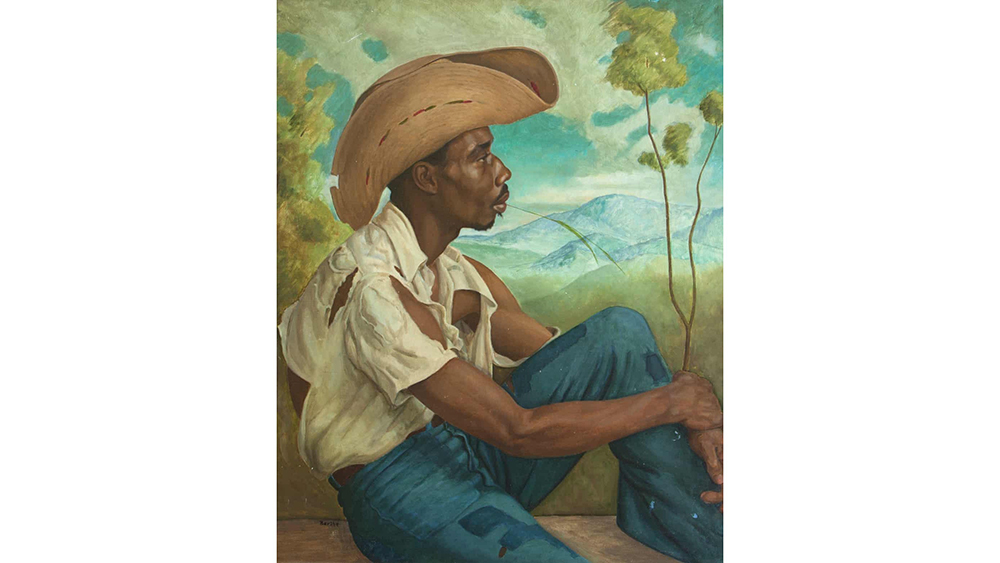 Courtesy of the National Trust

A painting of a Jamaican man that has been hidden away from public view for years has been identified as a work by Richmond Barthé, a key figure within African American art history.

The painting, titled Seated Man in a Landscape, dates back to the 1950s, during a period when Barthé was based in Jamaica. But art historians did not know that he was the author of the work because the attribution was “incorrectly transcribed,” according to the National Trust, the UK organization that announced the new research done on the painting.

The National Trust plans to put the piece on view at Belton House in Lincolnshire starting on Thursday. The painting’s display is meant to coincide with Black History Month in the U.K.

Belton House, which owns the work, has never before put the piece on display. The National Trust said it did not know how the work had arrived at Belton House in the first place, although the organization speculated that it may have been acquired by Perry Brownlow, who lived from 1899 to 1978 and had a vacation home in Jamaica.

The late art historian Margaret Rose Vendryes, an expert in Barthé, conducted the research on the painting in collaboration with Alice Rylance-Watson, an assistant curator at the National Trust. Together, they also identified the painting’s sitter as Lucian Levers, a worker at Barthé’s studio in St. Ann Parish.

“We are delighted to be able to identify Lucian Levers as the sitter as it can be difficult to name Black individuals who appear in historic portraits, chiefly because of a lack of documentation,” Rylance-Watson said in a statement.

Barthé is best known as a sculptor of images of Black men, whose bodies he rendered in exacting detail. These works achieved fame during the mid-20th century in the US, and he moved to Jamaica to escape the violence he encountered in New York and the attention being lavished upon him countrywide. He also spent time in Haiti, where he designed coins and built a monument to Toussaint Louverture in Port-au-Prince.