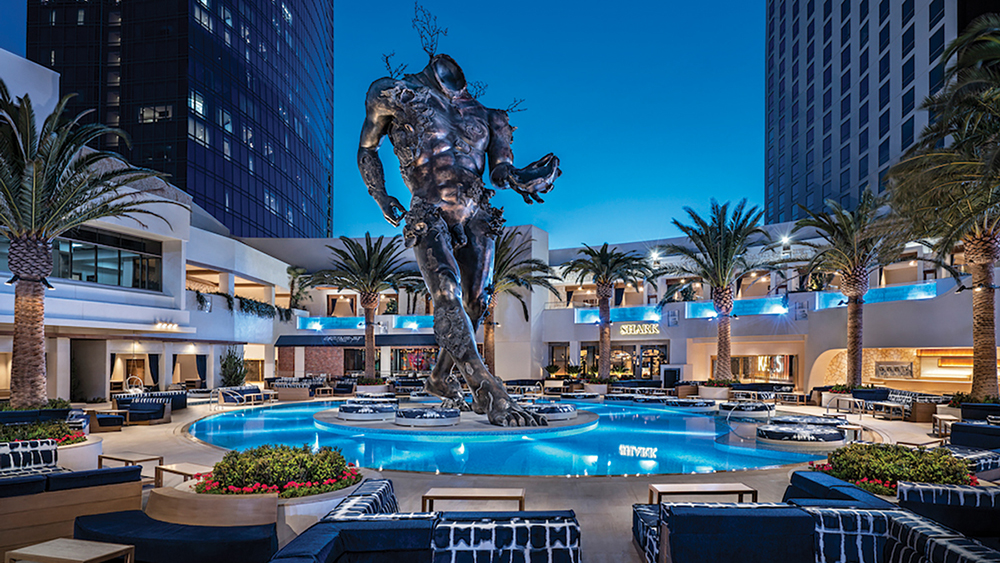 Courtesy of the Palms

When Las Vegas’s Palms Casino Resort announced earlier this week that it would close one of its most exclusive poolside clubs, many wondered: what would become of the Damien Hirst artworks that tower over the venue and were promoted as its signature collection?

For now, the works, which belong to two of the world’s top art collectors, will stay put.

Brothers Frank J. Fertitta III and Lorenzo Fertitta, Vegas casino moguls who have ranked on the ARTnews Top 200 each year since 2008, had only recently put the two Hirst works on views, which they acquired after the sculptures—the colossal Demon With Bowl (2014) and 23-foot Warrior and the Bear (2015)—appeared in the artist’s “disastrous” exhibition “Treasures from the Wreck of the Unbelievable” at fellow Top 200 collector François Pinault’s palatial spaces in Venice in 2017.

The Fertittas bought the Palms in 2016 for $313 million, and then launched a $690 million renovation to overhaul its image, anchored by Hirst’s artworks in the KAOS club. Those Hirst works will remain part of the Palms’ fine art collection, according to a spokesman, but did not comment on the fates of two other parts of the club, which include specially made artwork by Hirst.

But it seems that the promise of seeing the Hirst works, along with other high-profile celebrity-based experiences, wasn’t enough to keep the KAOS club afloat. Michael Britt, a spokesman for KAOS’s parent company, Red Rock Resorts, said in a statement to the Art Newspaper that the “expense side” of the business had been “challenging.” Bloomberg reported that Frank Fertitta told investors that patrons “did not have spendable money” and as such the company “didn’t see the crossover into the casino.”

Scooping up sculptures from Venice series wasn’t the only way in which the brothers had involved Hirst in the rebranding of a hotel and casino, best known for its role as the cast house on the 12th season of MTV’s The Real World in 2002. As part of the Palms’s makeover, the Fertittas also commissioned Hirst to design the interior of a two-story palazzo, called the Empathy Suite, that also included six original artworks, new entries into some of the artist’s most famous series: pill boxes, sharks preserved in formaldehyde, and brightly colored dots.

At $100,000-per-night, heavy spenders could enjoy a behind-the-scenes art tour of the resort, among other amenities, like a salt relaxation room and a cantilevered jacuzzi that overlooks the Strip. (Not to mention the club’s $1 million “KAOS THEORY” package, which included three nights in Hirst’s suite and over 200 bottles of Dom Pérignon.)

“I love what Frank and Lorenzo Fertitta have done with the Palms,” Hirst said in a statement during the suite’s unveiling. “It’s amazing being able to work with them because they are great collectors and totally understand art. They have allowed me to create a suite in the hotel and design everything and completely fill it with my art.”