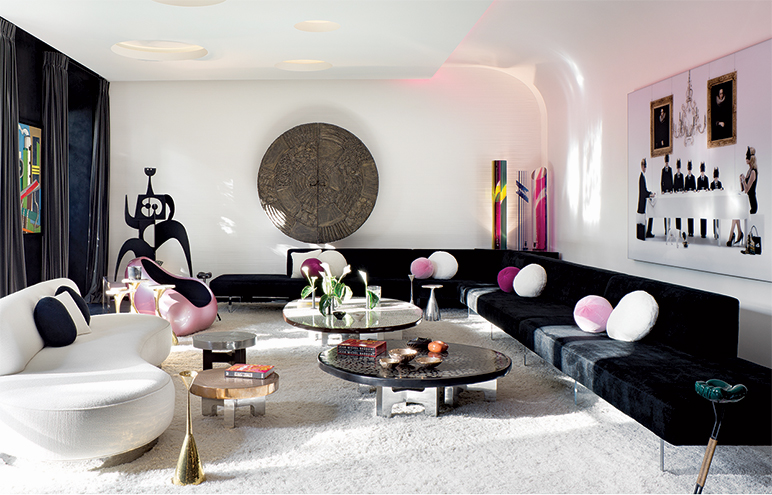 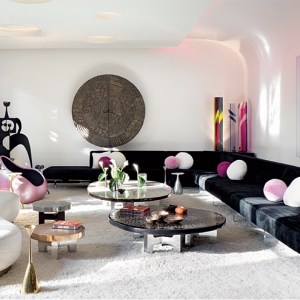 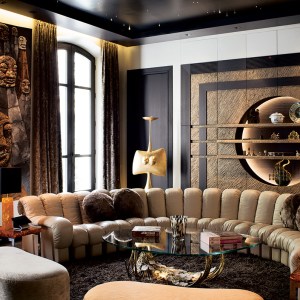 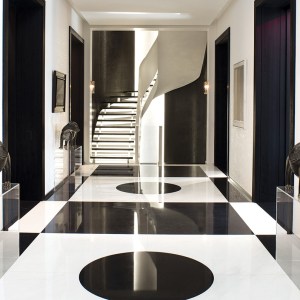 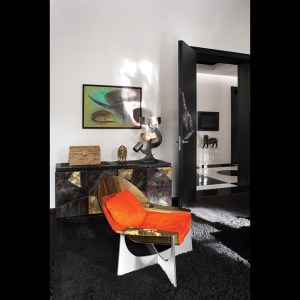 Behind the stately facade of a house on Paris’s Avenue Foch is an interior of great style and originality. It is the fruit of a collaboration between the home’s owner, a collector with a taste for pop colors; the architect Alain-Dominique Gallizia; and Victor Gastou, an art dealer who sells pieces at Gallery Yves Gastou, which his father, Yves, established on the Left Bank in 1984. “We are guardians of the temple, commissioning young artists, restoring pieces [from the 20th century] that are in a bad state, and fostering the pleasure of collecting,” says Victor. “We are not interior designers, but we can share our expertise, and we love to fill empty rooms with our furniture. We work with clients to express their personality.”

The personality expressed between the walls of this five-bedroom property is an intriguing mix of austerity and artistic indulgence that reflects the complementary tastes of the homeowner and Gastou. Gallizia stripped the 19th-century property of its interior moldings and redecorated it in a monochromatic palette with concealed LED lighting. The foyer sets the tone for the home with its marble inlays—black and white squares and circles that subtly reference the geometries of classicism, art deco, and op art. There is a more direct reference to history in the 16th-century lion sculptures, which are mounted on plexiglass stands beneath modern paintings.

Just off the foyer in the salon, a curvilinear pink chair by Karim Rashid plays off a 1960s Vladimir Kagan sofa. “We started with black and white but saw it lacked warmth, so we introduced some color and variety,” says Gastou. Circular openings in the ceiling soffit are echoed in side tables and a wall-mounted brutalist sculpture of metal and resin by Paul Evans, which provides a point of focus at one end of the long, high-ceilinged room. At the other end, two sculptural chairs—one with an aluminum frame, one with brass—form what Gastou calls an “odd pair,” recalling the 18th-century tradition of juxtaposing cabinets with subtly differentiated marquetry. At the center of the room, bridging the two halves, is a chess table with chairs drawn up, and nearby a neon sign spelling “Riez” invites guests to laugh. The salon is an edited version of Gastou’s inventory and a demonstration of his skill in divining which pieces will please clients and knowing how best to arrange them.

In the media room, the owners’ large family can gather on an expansive vintage sofa by Ueli Berger. The semicircular sectional evokes the futurist spirit of the 1970s, the era following the first moon landing and the film 2001: A Space Odyssey. Overhead, lights in the ceiling panels create a starry-night effect, while orange accents, in the form of resin side tables and lamps by Marie-Claude de Fouquières, brighten up the space.

The table in the formal dining room is heroically scaled: An 18-foot-long sweep of glass sits atop a 1970s abstract metal sculpture by an unknown artist. Plexiglass chairs by Laverne defer to this impressive construction. Two triangle tables in stainless steel by Philippe Hiquily sit beneath a Pierre Sabatier acid-etched copper wall relief that is embossed like a traditional African mask. The space sits in contrast to the breakfast room, which is adjacent to the kitchen and ideal for more casual meals. It features an Ado Chale metal table whose top is rippled to suggest a stone thrown into a pond.

A winding staircase with backlit treads leads up to the private areas of the house. The master bedroom has a pair of comfortable armchairs by Pierre Guariche—one in black and the other in white—and starry-night ceiling panels similar to those in the media room. Gastou notes that the library, which is located at the top of the stairs, has a 1930s look and feel in the manner of the French designer Pierre Chareau, thanks to its touches of alabaster and black lacquered metal. A glass balustrade in the center of the library surrounds an opening to the foyer below, and in the office, with its Willy Rizzo desk and Philippe Hiquily armchair, a large wall-mounted metal grille dominates.

Back downstairs, doors in the salon open to the home’s garden, where manicured greenery mixes with hardscaping to create pleasantly lush surroundings. A slate-and-pyrites table from Pia Manu can seat a large group, while other seating arrangements dotted about can accommodate more. The sculpture La Barque by Henri-Georges Adam provides the premises with yet another artful element, complementing the myriad treasures found at this exquisitely curated Parisian home.