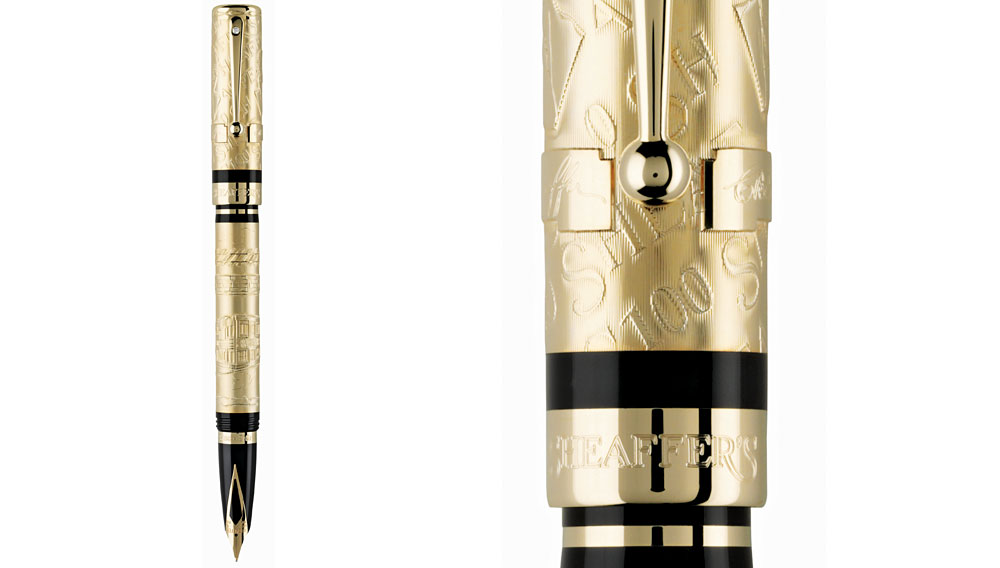 Since the creation of the first fountain pen 130 years ago, the writing-instrument industry has seen the rise and subsequent demise of countless manufacturers. The fickle market has been especially challenging in recent decades, which makes the 2013 centennial of the pen company Sheaffer an achievement worth celebrating. To mark the occasion, the American firm—which was founded in Iowa in 1913 and is now a subsidiary of Bic USA—has released the Centennial Limited Edition, a new fountain pen that honors Sheaffer’s history of innovation.

Sheaffer’s legacy in fountain pens dates to a revolutionary design that helped clean up what was a dirty business. “It was a pretty messy affair trying to fill a fountain pen in the early 20th century,” explains Tim Williams, Sheaffer’s general manager. “You had to fill it with an eyedropper, and you got ink on your hands and all over the place.” But in 1908, Walter Sheaffer, the owner of a jewelry store in the small town of Fort Madison, Iowa, solved the problem with the invention of a lever-filling system that employed a rubber sack inside the barrel to draw ink through the nib and into the pen.

Walter’s lever-filler pens, which he introduced in 1913, proved an immediate success. “He put his life savings into the company,” Williams says, “and within the first year of business, he had $100,000 in sales and earned back more than half of his initial investment.” As the brand’s competitors scrambled to patent their own self-filling mechanisms (with limited success), the company stayed one step ahead—it was the first pen maker to offer a lifetime guarantee, the first to employ an inlaid nib to accommodate fast-drying ink, and one of the early adopters of ballpoint pens—to secure its position as one of the world’s premier manufacturers for decades.

The Centennial Limited Edition celebrates Sheaffer’s heritage with a barrel engraved with images of Walter Sheaffer; his son, Craig, who assumed control of the company in 1938; and the original factory in Fort Madison. The Centennial is available in two versions: one crafted from solid sterling silver and limited to 516 pieces (a reference to May 16, the date of Sheaffer’s incorporation) and another carved from solid gold and limited to just 45 pieces (a nod to Walter’s age when he founded the company). Each of the silver ($3,750) and gold ($28,500) pens is stamped with a production number. Sheaffer’s trademark white dot appears on the clip of the silver version but is replaced by a diamond for the gold edition.

Though the Centennial Limited Edition is a celebration of Sheaffer’s past, the company is firmly focused on the future—one that may extend beyond pens. “In this difficult time, we are growing,” says Williams, who mentions ballpoint styluses for tablets among the company’s newest projects. “We have the attention of the older generations, and we are building [the Sheaffer brand] among young professionals. While we will always remain focused on pens, they will be the vehicle we can use to expand the brand into associated fields.”