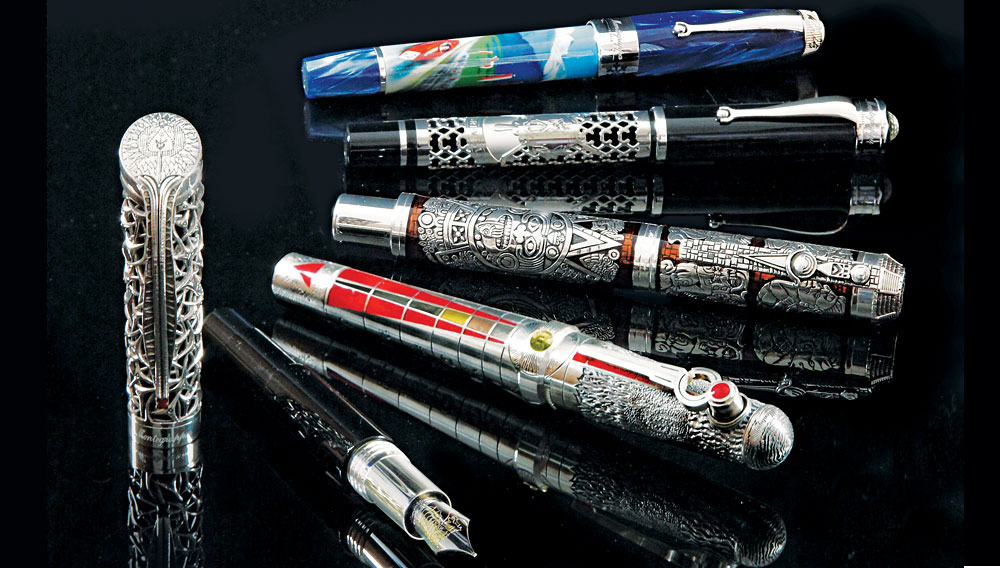 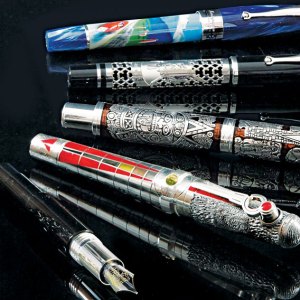 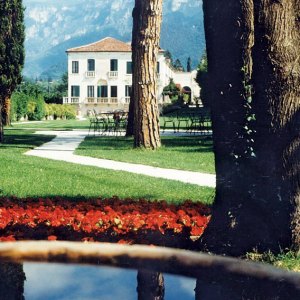 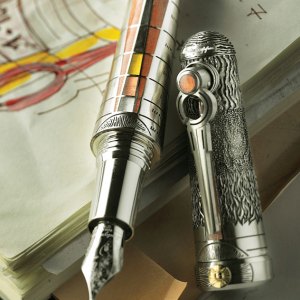 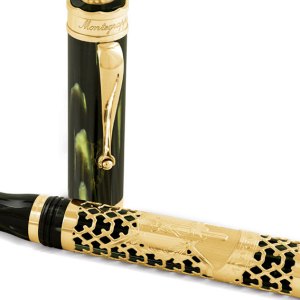 During World War I, as fighting spread to northern Italy, the 15th-century Villa Cà Erizzo Luca in Bassano del Grappa became a barracks for Red Cross ambulance drivers. Montegrappa, a then-new writing-instrument manufacturer located adjacent to the villa, started supplying the drivers with pens so they could write letters to their loved ones back home. A young Ernest Hem­ingway was among the eventual residents of the villa, where he is believed to have composed the first drafts of A Farewell to Arms using a Montegrappa pen.

Now celebrating its centennial, Montegrappa has maintained its strong ties to popular literary figures—and to Villa Cà Erizzo Luca. In March, the company hosted an event at the historic structure in Bassano del Grappa—a small medieval town about an hour’s drive northwest of Venice—to introduce the new Alchemist collection, the first of five limited-edition releases honoring Montegrappa’s 100th anniversary. The Alchemist also venerates the novel of the same name by Brazilian author Paulo Coelho, who was on hand at the launch party to receive the first example of the pen.

The Alchemist collection portrays Coelho’s novel—a bildungsroman in which the journey of the young protagonist is likened to the ancient quest to turn base metals into gold—with four versions of the pen: silver and resin, silver and enamel, 18-karat gold, and 18-karat gold with diamonds. Each pen’s barrel features engravings of the ancient names and symbols of alchemy’s seven primary elements, as well as a pyramid design that, on all but the silver-and-resin version, incorporates six of those seven elements. (Thankfully, mercury is excluded.)

Like the Alchemist collection, each of Montegrappa’s four additional centennial releases celebrates an aspect of the company’s heritage. Launching in September, the St. Andrews collection focuses on sports, a genre Montegrappa has explored in the past with editions dedicated to athletes such as soccer star Zinedine Zidane and F/1 driver Michael Schumacher. The new line is a tribute to St. Andrews Links, the 6-century-old Scottish club known as the Home of Golf. Three limited-edition versions of the pen will feature either silver trim, gold trim, or a hand-engraved depiction of traditional Scottish golfers rendered in solid gold.

With the St. Moritz collection, which is debuting this summer, Montegrappa is celebrating its dedication to the arts. The collection is named for the Swiss resort town of St. Moritz, which hosts numerous art-related events throughout the year. Works of art in their own right, the St. Moritz pens come in four versions, each featuring a handpainted reproduction of a vintage Art Deco postcard on its barrel.

In an ironic nod to its focus on tradition and history, Montegrappa will also introduce this summer the Mayan pen, which the company’s CEO, Giuseppe Aquila, quips “may be the last pen you ever use.” Each piece will be adorned with a hand-etched or lost-wax-casted replica of the fateful Mayan calendar—which mysteriously terminates in December—and a clip that resembles a sacrificial blade. In addition to gold and silver, the Mayan pen will be available in bronze, a first (if not last) for Montegrappa.

The final release of the centennial year, the Brain pen is Aquila’s personal favorite, in part because it represents his family’s long-held belief that writing is exercise for the brain. Like the human body, the Brain, launching in Octo­ber, is most complex in its upper regions. Available in silver and gold, the pen features a cap designed to resemble the clusters of neurons that compose human gray matter. The pen’s clip is modeled after the brain stem, and the top of the cap is engraved with a medieval, cross-section illustration of the brain.

Each of Montegrappa’s centennial pieces is available for individual purchase, at prices ranging from $2,700 to $143,000. The company will also offer an ebony display box adorned with the 100th-anniversary logo to customers interested in obtaining all five pens. If history is any indication, the set will be something for collectors to write home about.