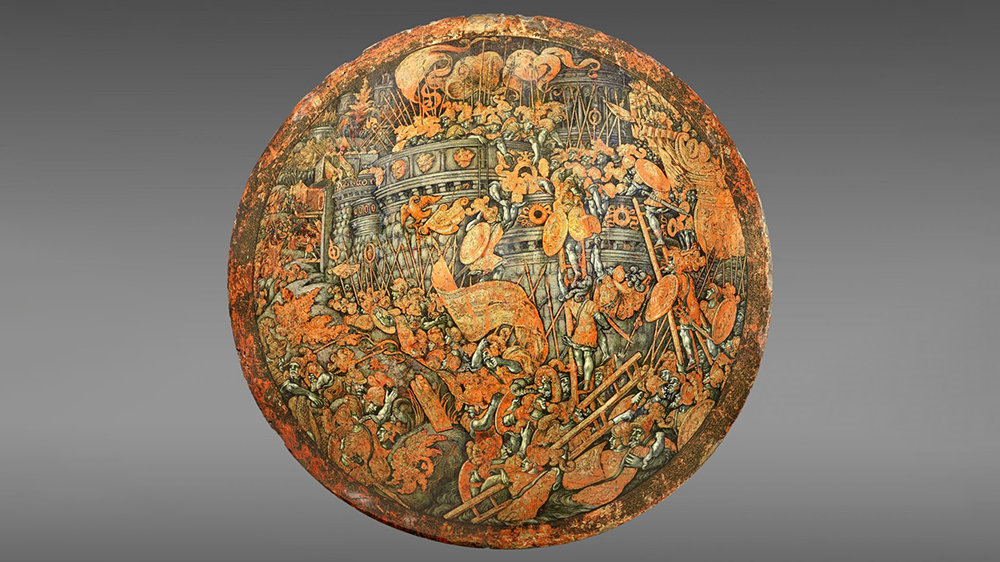 The Philadelphia Museum of Art will restitute a 16th-century ceremonial shield that was confiscated by the Nazis during World War II to the Czech Republic.

The shield is attributed to Italian Renaissance artist Girolamo di Tommaso da Treviso and depicts a Roman battle scene. It once belonged to Archduke Franz Ferdinand, scholars have recently found, and was later confiscated by the Nazis after the regime annexed Czechoslovakia between 1938 and 1939.

The object, dated from 1535, entered the Philadelphia Museum’s collection in 1976, when it was gifted by Carl Otto Kretzschmar von Kienbusch, a New York tobacco industry magnate, who had acquired it in 1954 from collector Theodore Wollner. Since the mid-’70s, it has been exhibited in the museum’s galleries of arms and armor.

The museum said it began working with historians in the Czech Republic in 2016 to evaluate the ownership record of the shield. Ferdinand, whose assassination in 1914 prompted the beginning of World War I, owned a cache of arms and armor known as the d’Este Collection, which he housed at the Konopiště Castle, south of Prague. In the aftermath of World War I, the new government of Czechoslovakia took possession of the Konopiště property. By the start of World War II, Germany had annexed the region in which the castle is located. In 1943, the Nazis confiscated the castle’s armor collection.

“After many decades, a remarkable piece of Italian Renaissance art, historically belonging to the d’Este Collection of the Konopiste Castle, returns to the Czech Republic,” Nadezda Goryczkova, head of the Czech Republic’s National Heritage Institute, said in a statement.

The Philadelphia Museum and the National Heritage Institute jointly agreed to return the piece. As part of the agreement, the institute will consider future loan requests for the shield from the U.S. museum, the statement said.

According to the Philadelphia Museum, Leopold Ruprecht, the Nazi regime’s arms and armor curator, picked the top pieces in the collection of looted antiquities for Hitler’s unrealized museum in Linz, Austria. In the years following the war, Allied forces had recovered a number of stolen artifacts from the Nazis and returned them to Czechoslovakia. When the Allied forces completed their art recovery efforts, only 15 objects of all the works in the arms and armor collection from Konopiště were still missing.

Historians that worked with the Philadelphia Museum had identified the shield in a photograph dated to around 1913, when the object was displayed at Konopiště Castle, to confirm that it was one of the missing items. In response to the new findings, the museum’s board of trustees unanimously voted to approve the the return of the piece to the Czech Republic on June 17.

“This case is a prime example of best practices in restitution,” said Hynek Kmoníček, Czech Republic ambassador to the United States, in a statement. “Our fruitful collaboration can serve as a model of international partnership in restoring looted art.”

The Philadelphia Museum has previously restituted objects from the arms collection it received from von Kienbusch. In 2000, it returned five works of armor from the Kretzchmar gift to the Dresden State Art Collections in Germany. As part of the agreement, the two institutions arranged a series of exchange loans through which works by Gustave Courbet, Claude Monet and Henri Matisse were temporarily sent to Dresden.