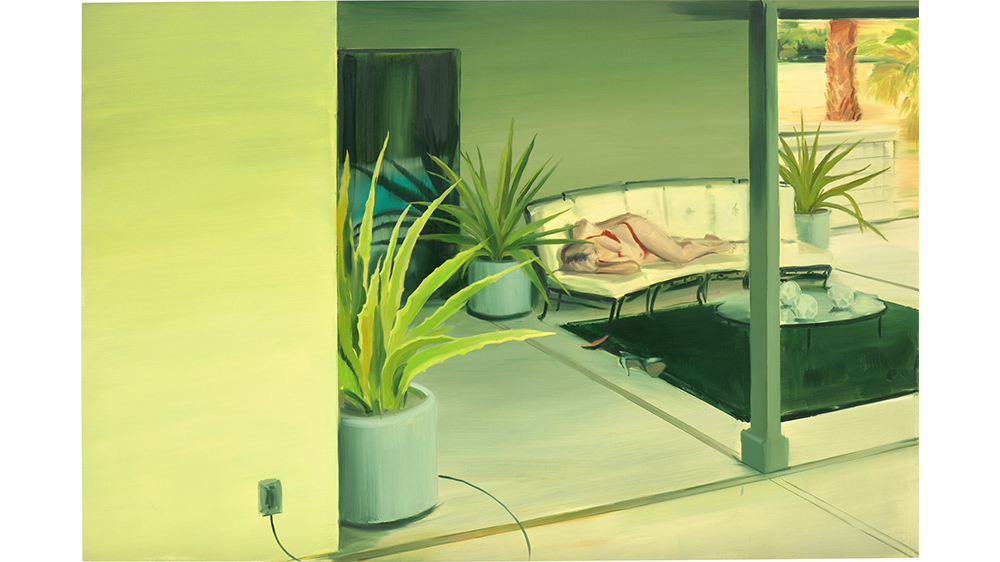 In the last stretch of auctions staged in London this week, Phillips held an evening sale offering works of modern and contemporary art evening at its U.K. headquarters, bringing in a combined total of £17.5 million ($21 million) with fees.

The energy for the hour-and-a-half-long sale, led by auctioneer Henry Highly, was higher than sales led by its larger competitors—Christie’s and Sotheby’s this week—whose sales are twice the size. More than in the other London sales, which were anchored with top lots by canonized male artists, Phillips’s sale relied on some of the market’s youngest artists to activate momentum with bidders.

While a few bidding wars broke out, the auction generated only one new record—for Antonia Showering. Bidders from Canada, France, Lebanon, Hong Kong, and London participated.

Phillips is leaning into the market-wide feminist bent recently embraced in contemporary art auctions. The first nine lots of the Phillips sale were works made by women.

Early in the sale came a work by Lauren Quinn, a 29-year-old Los Angeles-based painter. Recent acquisitions of her work from museums in Miami and Beijing have put her on the map. Quinn’s mint green painting Numbness (2019), which references biomorphic forms, surpassed the house’s £50,000 ($61,000) low estimate. Attention from four bidders, including those spanning from France and Lebanon, moved its final up to £201,600 ($245,000.)

Meanwhile towards the end of the sale, a painting sold by London-based artist Flora Yukhnovich, whose reinterpretations of 18th-century Roccoco imagery have been in high demand since her auction debut last year. Moi aussi je déborde (2017) went for £1.7 million ($2.1 million) with premium. The result was more than five times the low estimate. It came shy of her £1.9 million (US $2.5 million) record set at Christie’s in March.

The painting Afters (2016) by Caroline Walker initiated a bidding war that stretched for several minutes. Bidders competing for the monochrome green painting, which depicts a bathing-suit clad woman laid on an outdoor sofa, had moved it well beyond its $£60,000 estimate, selling eventually for five times that estimate for a final price of $£315,000 ($383,188).

Bidding started strong with the sale’s opening lot—31-year-old British painter Antonia Showering’s canvas We Stray (2020), an orange-and purple-hued landscape with five figures. On the heels of her recent addition to the London gallery Timothy Taylor, Showering saw a new auction record when the painting sold for £239,400 ($290,000) with premium, going for six times the £40,000 estimate. It was won by a bidder on the phone with Marich.

One of the sale’s opening lots was Wavy Navy (2015) by Shara Hughes, who had a breakout feature in the 2017 Whitney Biennial. Hughes has seen a recent rise in the market with her works showing up in Hong Kong sales. That lot saw attention from a Hong Kong bidder, but hammered below its low estimate for £200,000 ($243,207), going to a buyer on the phone with Phillips’s deputy chairman Svetlana Marich.

María Berrío’s figurative painting The Riders II (2012) fared much better, going for £809,000 ($981,560), six times the low estimate after bidders from London and Lebanon competed for it. It went to a buyer on the phone with Phillips chairman Jean-Paul Engelen.

As is typical, the sale’s top lots were pieces by male artists made decades ago. A 1962 untitled work on paper with scrawls by Cy Twombly and a figurative painting that Michelangelo Pistoletto produced between 1962 and 1967 sold for prices within their estimate at £2.7 million and £2 million ($3.3 million-$2.4 million) respectively.