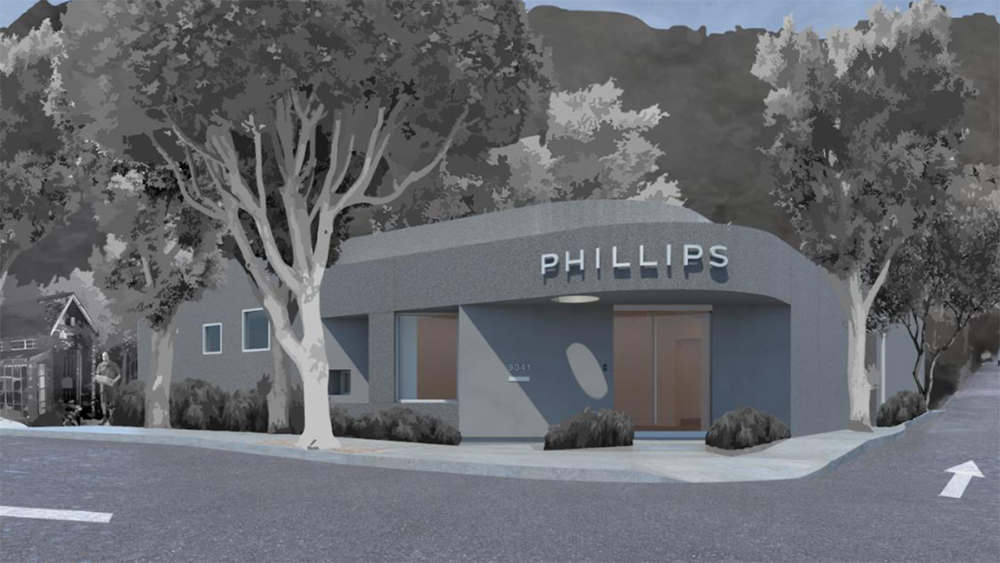 Courtesy of Formation Association
Amid reports of a reaching a record $746 million in sales for the first half of 2022, Phillips has detailed plans to expand its footprint in the US with moves to open a Los Angeles outpost this fall.

Set to open in October, the auction house’s new West Coast headquarters will be located at 9041 Nemo Street in West Hollywood, off Santa Monica Boulevard, in a 2,600-square-foot exhibition. The space will be overseen by regional director Blake Koh, who joined Phillips in 2016 from Sotheby’s as a contemporary art specialist manning the house’s LA client relations.

The expansion to the West Coast coincides with an upward trend for the company, which is the third largest global auction house, trailing its larger competitors Christie’s and Sotheby’s. The half-year sale figure represents a 37 percent rise over the result of $542.7 million achieved during the same period last year. It is the highest in its history, surpassing the 2018 benchmark of $600 million.

Through live and online auctions channels, Phillips generated $590 million between January and June, a 30 percent rise, over the $452 million achieved during the first half of 2021. The remaining bulk of the funds, $156 million, came in through private sales, an uptick of 72 percent over last year’s figure of $90.7 million. That stat marks a feat for the auction house, which seen a rise in private sales since the onset of the pandemic.

By comparison, Christie’s reported on Tuesday that the house brought in $4.1 billion in sales in the first six months of the year. Sotheby’s plans to release its sales figures in the next month, though a recent report from art sales research firm ArtTactic said the rival auction house sold around $3.2 billion in art during the first half of the year.

Auction houses have been eyeing traffic in the Los Angeles art market, the second largest in the US, behind New York. Christie’s moved into its West Coast flagship in Beverly Hills in April 2017. Last fall, Sotheby’s opened an exhibition space also in Beverly Hills, on Camden Street, not far from mega-dealer Gagosian’s outpost there. The much smaller auction house Bonhams has maintained a salesroom in LA since it acquired Butterfields in 2002.

This is the first permanent brick-and-mortar space in the US that Phillips has had outside of New York. “One important difference is the incredible scope of young and established artists working in the area,” Koh said of its expansion to the West Coast, adding that it’s where international collectors come “to take the pulse of the art market.”

In a statement, Stephen Brooks, Phillips’s recently appointed CEO, expressed optimism for the boutique house’s future, calling the period a marker of “extraordinary growth” for the company. It opened its new Park Avenue headquarters last year and will open a forthcoming flagship in Hong Kong’s West Kowloon this fall.

A focus on Asia remains on the house’s agenda with the new location. The house said that 41 percent of the auction hammer sales (without buyer’s premium) went to clients in Asia. More than a third of buyers based in the Asia pacific region, the report said, were millennial collectors. (Though the house did not release  the exact percent of its buyers based in Asia or in other regions.)