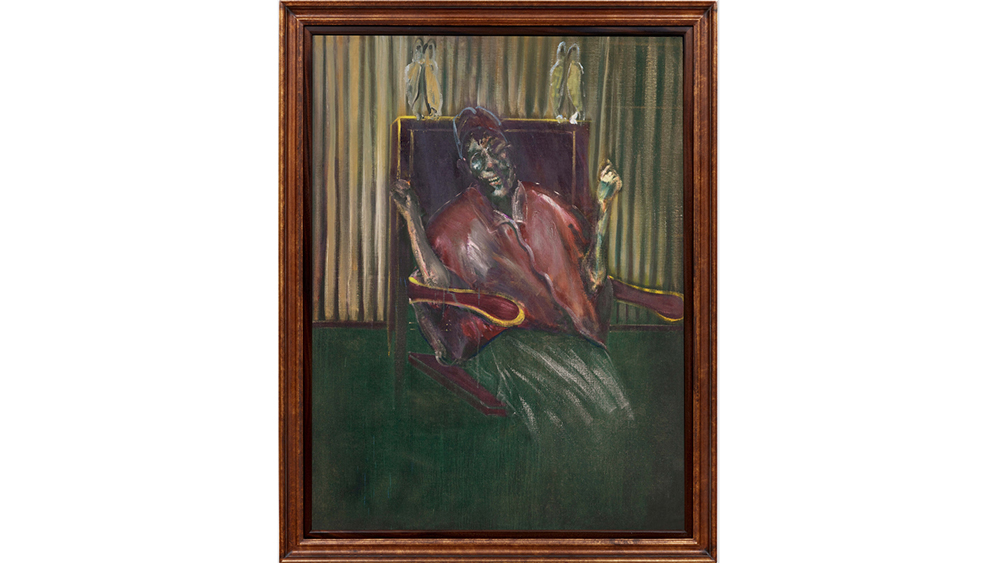 After Christie’s and Sotheby’s launched the marquee auction season in New York, Phillips staged its 20th century and contemporary art auction at its newly opened Park Avenue headquarters on Wednesday night. The sale brought in a total of $139 million, the highest total for an evening sale in the house’s history.

Of the 46 lots offered, 43 sold, with the sale achieving a 93 percent sell-through rate. Two lots—a painting of a young Vietnam War-era soldier by Barkley L. Hendricks from 1968 and another by Milton Avery from 1957—were withdrawn before the sale began. Eleven lots in the auction were offered with irrevocable bids. The total hammer price for the entire grouping (before fees were added) came to $119 million, landing solidly within its collective pre-sale estimate of $96.4 million-$133.1 million.

Phillips auctioneer Henry Highly took to the rostrum on Wednesday to lead the two-hour sale in a new exhibition space that converts into the auction house’s stage. This was also the first sale of the marquee season to take place under the helm of the new Phillips CEO Stephen Brooks, formerly the chief financial officer of Christie’s. Brooks was announced as the house’s new head in August, taking over for Ed Dolman.

The work that fetched the highest price of the night was a 1958 painting by Francis Bacon of a leering pope flanked by two owls perched on his throne. The painting, which came to the sale with an irrevocable bid, hammered at $33 million, just eking over the $30-million low estimate. It went to a bidder on the phone with Phillips worldwide cochairman J.P. Engelen. (Forty years ago, the seller purchased it from Swiss dealer Thomas Amman for a price around $7,000.) In a press conference following the sale, Engelen expressed regret that the work didn’t elicit more bids. “I could not think of a better trophy, and there was no fight over it,” he said. “That was a disappointment.”

A vibrant large-scale painting by Joan Mitchell from 1992, the year of the artist’s death, sold to a New York bidder for $11.8 million, more than double the low estimate of $4 million. Another big-ticket item was a Jean-Michel Basquiat painting from 1984 of three crowned heads in blue square vignettes on a wooden door. It hammered at $7.1 million and sold for $8.5 million with fees, above its low estimate of $6 million. A floral work by Georgia O’Keefe—Crab’s Claw Ginger Hawaii (1939), painted during a paid stint in Hawaii for a Dole food company advertising campaign—outpaced expectations. It sold for $7.7 million, nearly double the $4 million estimate, to a bidder on the phone with Phillips New York chairman Robert Manley. A Cecily Brown untitled abstract painting from 2007 exceeded its $4 million high estimate, selling for $6.1 million. It went to a bidder in the room who beat two others on the phone from New York and Hong Kong.

Bidders from Asia drove up the prices for works by emerging artists represented in the sale. The first lot of the night, Shara Hughes’s Inside Outside (2018), drew multiple bidders from Hong Kong and New York as well as online. It sold for a record of $1.4 million, against an estimate of $30,000. British artist Jade Fadojutimi’s My Umbrella Has a Nourishing Disguise, a bustling large-scale canvas from 2018 with wide strokes of maroon and orange, prompted a similar depth of bidding. It sold for $877,000, going for more than five times its $150,000 low estimate. Ewa Juszkiewicz’s Girl in Blue (2013), a riff on an Old Masters-style painting of a woman with a superimposed mollusk over her head, achieved a similar result; after fielding bids from Japan and Hong Kong, it sold for $730,800, nine times the low estimate of $80,000. The results for Hughes and Juszkiewicz set new records for both artists.

Wednesday’s sale reflected an ongoing move on Phillips’s part to structure sales around offerings by women artists and artists of color, whose works are in demand on the primary market. “We went after those artists that we think are relevant, knowing those artists that are going to excite our clients,” Phillips chairman Manley said after the auction ended. But while the house has maintained its focus on the vanguard of newcomers, Phillips’s executive team is also determined not to leave artists of the past (including the likes of Bacon and O’Keeffe) behind. “Everyone wants to write the obituary of modern art, and it just isn’t true,” Manley said. “You just have to know what are the great paintings.”