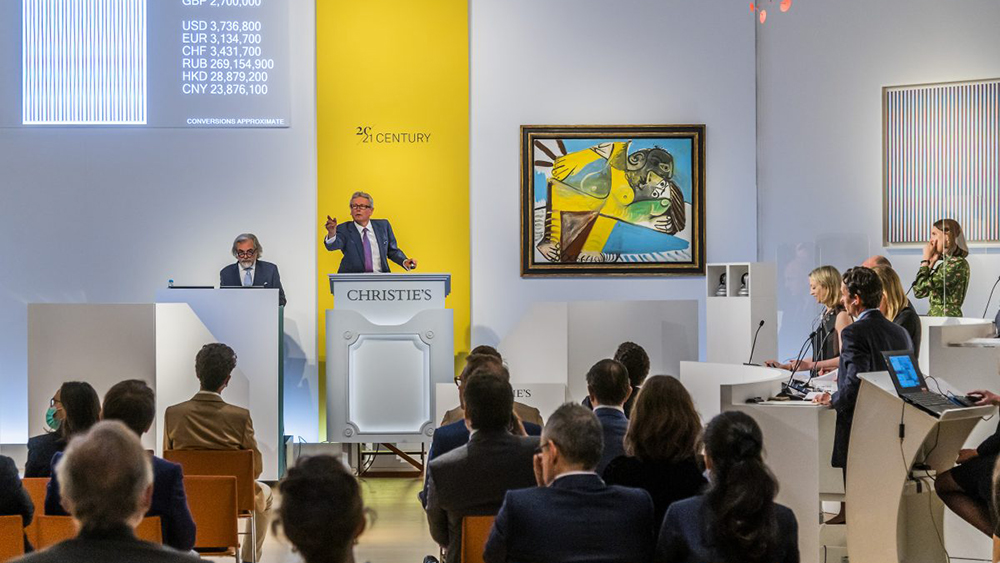 On Wednesday, Christie’s staged its marquee modern and contemporary art sales in London and Paris. The back-to-back sales, which included the works from the collection of French advertising mogul Francis Gross, were led by Jussi Pylkkänen and Cécile Verdiermade, the Christie’s global president and head of France, respectively. The three sales made $212.5 million with buyer’s premium across 82 lots, hammering at $176.9 million, above the $128 million pre-sale estimate and realizing a strong 90 percent sell-through rate.

In the fall, when the house debuted its London-to-Paris format, the series brought in a lower total of $118 million. Giovanna Bertazzoni, Christie’s vice chairman of 20th/21st century, said this week’s result is the highest in the region since 2017, describing it as “a sign of relief for us” in a press conference following the sale. The auctions were staged in the afternoon, as has become common practice in marquee auctions post-pandemic, though they were still labeled evening sales, in keeping with Christie’s tradition of hosting its biggest sales at night.

In the London session, Banksy’s Love Is In The Air (with stars), from 2003, was withdrawn because the auction house’s failure to find a buyer for it. Twenty-one lots were secured with guarantees, bringing in a collective $118.5 million with buyer’s premium and accounting for 56 percent of the total sum made across the three sales.

Bidding from Asia continues to be a driving force in marquee auctions. Christie’s CEO Guillaume Cerutti said that, in the first six months of the year, bidding from Asian collectors across all categories at the auction house has surged to “historic levels,” above its usual 30–35 percent share. But in yesterday’s sales, bidding coming from clients registered with Hong Kong specialists was nothing out of the ordinary, with much of these buyers’ attention focused on a few lots by George Condo, Yayoi Kusama and Edgar Degas.

Leading the first portion of the series on Wednesday was Picasso’s L’étreinte (1969), depicting the artist and his third wife Jacqueline Roque in an embrace. It sold for £14.7 million ($20.3 million) in its auction debut. Two bidders from New York and London competed for the guaranteed work. The hammer eventually fell at £12.6 million ($17.4 million), putting the final sum just above its £11 million high estimate. It went to a collector bidding on the phone with Alex Rotter, chairman of 20th/21st century Christie’s worldwide.

Alongside Basquiat, Picasso leads by market share in the top auction sales. “Picasso continues to be a very attractive global brand,” Bertazzoni said after the sale.

Also among the top lots was Alberto Giacometti’s bronze sculpture Falling Man (ca. 1950–51). It attracted three bidders, two on the phone from New York and London and another from a man in the salesroom. It realized a hammer price of £11.7 million ($16.2 million), meeting its low estimate of $16 million.

When the action moved on to Paris for a sale led by Cécile Verdier, a technical glitch interrupted the livestream during bidding on the Gross collection’s cover lot, René Magritte La Vengeance (1936). After a several-minute-long pause, the Magritte had drawn bidding from six clients, who drove the final price to £12.5 million ($17.3 million). It was bought by a private collector bidding on the phone with Christie’s Paris specialist Fleur de Nicolay.

Another Giacommetti that sold in the Paris session from the Gross sale was Giacometti’s Buste d’homme (Lotar II), depicting the photographer Eli Lotar. The hammer fell at made €3.3 million ($3.5 million), nearly three times the low estimate of €1.2 million ($1.4 million).

Just one record was set during the series. The auction’s opening lot, Stanley Whitney’s Light a New Wilderness (2016), sold for £525,000 ($726,600), three times the low estimate. It went to a buyer on the phone with Christie’s Hong Kong director Elaine Kwok.

Eight bidders competed for a geometric painting by British artist Bridget Riley. Zing 2 (1971) sold for a triple-estimate price of £3.2 million ($4.5 million). The result was the second-highest price for Riley at auction.

Christie’s offered Keith Haring’s 1984 untitled yellow tarpaulin work at an estimate of £3.9 million ($5.3 million). In a bid to attract crypto-wealthy buyers, the house said it would accept cryptocurrency from the winning bidder. It made £4.3 million ($5.9 million), marking a solid return from its last sale at auction in 2018 from the collection of the German dealer Paul Maenz. The current seller, who went unnamed by Christie’s, purchased it there for £3.9 million.

George Condo’s grandly sized painting Large Figure Composition (2008) did not generate the same kind of success. It had last sold for $852,500 at Christie’s in 2017, when it came to auction from the collection of late Whitney Museum trustee Melva Bucksbaum. On Wednesday, it sold at a loss, finding a new owner for £500,000 ($688,400).

Works by Henri Matisse, Cy Twombly and Winston Churchill were among the few lots that failed to place with new owners.

Christie’s executives said that the house will continue to think on a global scale, making moves to unite regions that have long been kept commercially separate, likely through virtual means. “Our sales are now less site-specific,” Pylkkänen said in the post-sale conference. According to Pylkkänen, salesrooms included 800 participants pre-pandemic. Now, several thousand people watch the proceedings, with most of them doing so from behind a screen. Cerutti, meanwhile, described the dual-city auction as a “relevant format post-Brexit.”

Cerutti added that further expanding sales in Hong Kong, where sale venues are relatively limited, remains a key focus for the auction house, saying, “I think the main question is: How do we integrate the Asia sales in a better way, knowing that the activity there and the number of clients there is so important?”