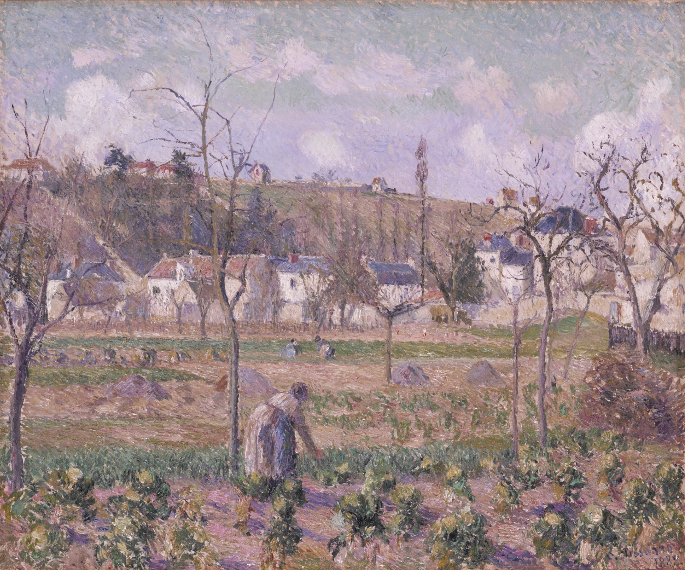 The picture dates from 1882, at the end of a 10-year period during which the Impressionists changed the rules of 19th-century art. By painting in the open air rather than the studio, they focused on the essentials of light and color, breaking the stranglehold of the conservative establishment and showing the way for artists into the 20th century. The sparkling light and vivid colors of Le Jardin de Maubuisson, Pontoise, la Mère Bellette show Pissarro at the height of his powers. The subject is the market gardens behind Pissarro’s house in Pontoise, with his neighbor Madame Bellette working her plot. The painting’s candid and natural imagery is characteristic of the Impressionist’s emphasis on scenes from real-life.

Pissarro was regarded as the dean of the Impressionist movement, the only artist to exhibit at all eight Impressionist exhibitions between 1874 and 1886, and a guiding figure for the younger artists. Cézanne called him “a man worth consulting, and something like God Himself,” while Monet compared him to Moses. Both artists, almost ten years Pissarro’s junior, considered him a mentor. They sought his advice more than ever during the 10 years he lived in the small town of Pontoise, northwest of Paris, between 1872 and 1882. Cézanne lived in the town regularly during this period, working side by side with Pissarro, and was probably staying there when the Le Jardin de Maubuisson, Pontoise, la Mère Bellette was painted. Gauguin was also a regular visitor, while Dr Gachet, van Gogh’s great patron, lived nearby.

The picture was formerly in the collections of noted connoisseur Alfred Bergaud and French Prime Minister Fernand Bouisson before being exhibited in 1947 by the Wildenstein Gallery in New York, where it was purchased by the family of the current owner.