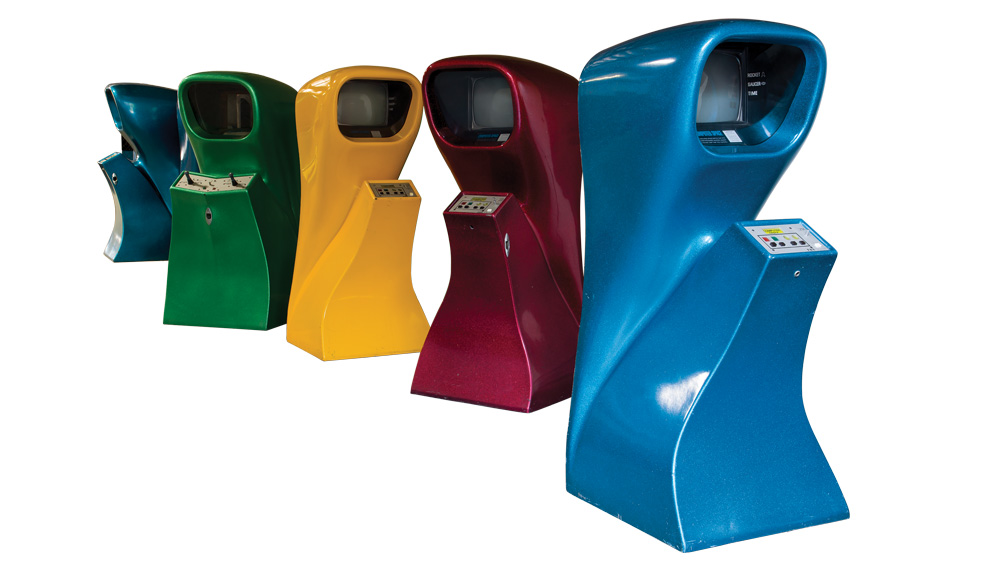 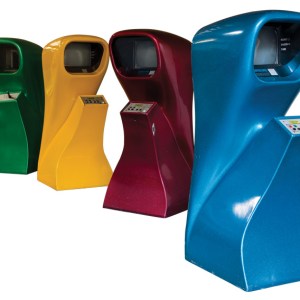 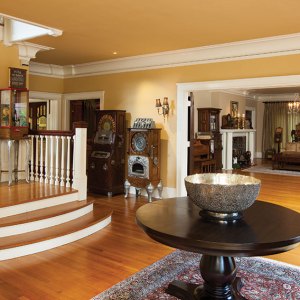 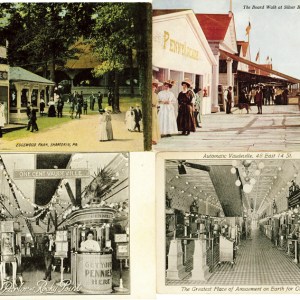 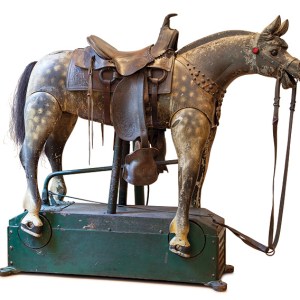 How an Internet entrepreneur assembled a world-beating collection of arcade games.

Greg McLemore parks his dark blue Tesla Model S outside an unmarked office building on a quiet street in Pasadena, Calif. The 47-year-old Internet entrepreneur is about to close escrow on the space, and he fiddles with his key in the front door lock and wends his way through a series of empty offices before arriving at his destination: a cavernous warehouse that holds more than 100 brightly colored arcade games, all protected under plastic.

An early yellow-and-black Atari Pong machine stands alongside old favorites like Galaga, Tempest, and Space Invaders. Electric signs from Disneyland Penny Arcade exhibits lean up against each other and boxes of memorabilia crowd the concrete floor. Against one wall, a series of unfamiliar, sparkly fiberglass cabinets stand out among the crowd: Blue, yellow, red, and green, they are all designed with the same hulking, 1970s vision of the future. Their gray monitors float at eye level like a blank face under a hooded robe. The creatures offer up one- or two-person controllers—several buttons or a joystick—as if tempting new players to approach.

It is a natural starting place for a tour of McLemore’s collection. Computer Space was a famous commercial flop—but its inventors, Nolan Bushnell and Ted Dabney, went on to found Atari, which released Pong in 1972 and launched the video game revolution. For McLemore, such pivotal moments define a collection of arcade games that stretches back to the first floor-model coin-operated games—early 1880s strength-testing machines—and includes the first coin-operated kiddie ride (a 1920 mechanical horse) and the 1971 prototype for those Computer Space games. In all, McLemore owns 750 coin-operated amusements and video games from the 1880s to the present, a collection unrivaled in the United States, if not the world, for quantity, quality, and span of time.

When the self-professed “arcadiologist” finishes moving his collection into the new space, this 11,000-square-foot building will be transformed into the Museum of the Game, a private museum open for appointment-only tours and events. For now, most of McLemore’s games are scattered among smaller warehouses and many, many climate-controlled storage lockers around the city. Together, they form a collection that traces a direct line from the first coin-operated arcade game to today’s global video game phenomenon, where sales are projected to reach $111.1 billion by the end of the year.

McLemore drops a penny into a Play the Derby game from 1928 and turns the crank—setting a tiny racehorse on a gallop around the track. “I spend so much time in front of a screen that I like the art and the analog nature of these old things,” he says. “They’re games. You have to play them.”

In 1994, the same year that Jeff Bezos founded Amazon, McLemore—a college grad with a political science degree—registered the domain names toys.com and pets.com, among others. He taught himself computer programming out of necessity, registered and sold some domains, and turned others into profitable Internet-based companies. By 1999 Amazon.com had purchased an approximately 50 percent stake in pets.com. Later that year, McLemore turned the company over to a CEO, finding he had some time and some money on his hands.

He used a little of it to purchase a mechanical fortune-teller that he stumbled upon one night on eBay. The wrinkled animatronic woman springs to life when you feed her a coin. From inside her glass box she spreads out a deck of cards, makes a calculated selection, and drops it down the chute to her patron. “It reminded me of growing up in Los Angeles and of my repeated visits to Disneyland and its Penny Arcade,” McLemore says.

Soon he was hooked and the collection grew, through word of mouth, private collectors, auction houses, and advanced software he wrote to search eBay. “One of the things I like to highlight,” McLemore explains, “is how the earliest inventions inspired later innovation.”

For example, mechanical target-shooter gun games were being manufactured by the end of the 19th century, and duck hunting became a theme early on. A company called Seeburg made an electric duck-shooting arcade game in 1936, and Sega made an electromechanical version in 1969. Nintendo’s video game Duck Hunt was released in 1984, and today you can go to your phone’s app store to buy dozens of mobile versions.

The period from 1890 to 1910 was a major era of innovation for coin-operated games. Back then most folks had heard of a cotton gin, but few had fumbled with an actual product of the industrial revolution. When vending machines for cigars and chewing gum were installed in public places, fascinated crowds would just hang around, spending money. “Salespeople would place a machine in one location and, when the novelty wore off, would move it to another location,” McLemore says.

By 1894, Thomas Edison had introduced the Kinetoscope, an early motion-picture device that allowed viewers to peer into a chest-high box and watch a film through a peephole. In 1898, Wurlitzer built its first coin-operated player piano. “People could find amusement by themselves for very little money,” McLemore says. “These machines were really just mechanical apps of the day.”

While the mass-produced arcade video games are still easy to pick up for a few hundred dollars, older coin-operated games can sell for tens of thousands or even more than McLemore’s Tesla. In May, Morphy Auctions set a record with a circa-1900 Caille Peerless 5-cent floor roulette slot machine that fetched $300,000. In the same auction, an 1899 Mills Duplex upright slot machine secured a winning bid of $108,000.

McLemore has several turn-of-the-century gambling games in the foyer of his 99-year-old Pasadena home, which he shares with his wife and two young children. When a group of coin-op machine collectors came from around the world to a Los Angeles–area show, McLemore hosted a party showcasing some of his favorite machines. The games remain in the house, still outnumbering the furniture in the main living spaces. He points out a roulette model that calculates odds and pays out winners. “For a 100-year-old machine to do that is just cool,” he says.

In his dining room McLemore keeps a 1904 Electricity Is Life shocker machine made by the Mills Novelty Co. that claims to treat “all forms of muscular ills.” Part endurance test, part quack medical device, the game gives players an increasingly strong electric shock depending on how hard they pull apart its handles. In his living room, a German Cognac vending machine in the shape of a barrel pours you a drink and plays you a tune.

Mills games, McLemore explains, were distributed in the 1940s by a Honolulu-based company called Service Games. In the early 1950s, the company moved to Tokyo, and in 1965 it had shortened its name to Sega Enterprises. By the late 1980s the company was reaping hundreds of millions of dollars in the home console market. “So there is a single degree of separation between the earliest arcade games made,” he says, “and one of the most famous video game manufacturers in the world.”

When McLemore was about 8 years old, his parents bought him a Pong game from Radio Shack that plugged into the family’s TV set. He shared the primitive electronic version of ping-pong with his two younger brothers, but he remembers logging more hours than they did. “You know how on those old games you can roll over the max score?” he asked. “Well, I thought, could I roll over the max score 100 times in a night?”

Of course, he could.

McLemore was not the only one mesmerized by the blinking screen. When the Atari 2600 video game console was released in 1977, 250,000 families purchased the $200 system that year. Sales doubled the following year and by the early 1980s the company was grossing billions in annual revenue. Today, screens are gigantic enough and Internet connections fast enough that sports stadiums can host teams of professional gamers competing at center court, so to speak, for sold-out crowds. During the past school year, ESPN started broadcasting college video game tournaments, and some schools handed out athletic scholarships to student gamers.

In 2014, Amazon bought the 3-year-old website Twitch for $970 million. On twitch.tv, hundreds of professional and amateur twentysomething gamers are playing popular titles accompanied by quite enthusiastic, play-by-play commentary for thousands of viewers.

Thirtysomethings, meanwhile, are flocking to themed bars to play Ms. Pac-Man, Donkey Kong, and Frogger. With a craft beer in one hand and a stack of quarters in the other, they clamor for high scores like they did in the good old 1990s. New York City’s Barcade opened in 2004 and from its success has expanded to four locations. In L.A.’s downtown arts district, EightyTwo opened in 2014 with a list of craft cocktails and dedicated rooms for arcade games or vintage pinball machines. A half-mile from McLemore’s future museum in Pasadena, Neon Retro Arcade opened in January with 40 arcade and pinball games.

In 2000, McLemore became the manager of the Killer List of Videogames, an online encyclopedia of coin-operated games. The website is a reference center as well as a collector community with extensive message forums. Monthly traffic averages 150,000 visitors generating 3 million page views. McLemore has also established the nonprofit International Arcade Museum Library for preserving research material and hosting exhibitions on the history of coin-operated games.

In the late 2000s, he spotted an unusual kiddie horse ride listed in a seven-day auction. “I knew it was special and early, and that it didn’t have that 1950s look to it,” he says. “But I didn’t know how special it was until after I bought it.” With a winning bid of $6,000, he secured the horse and then found patent applications and newspaper and magazine articles to confirm that the 1920 machine is indeed the first-ever coin-operated kiddie ride.

On eBay, he also tracked down one of only four Computer Space prototypes ever made, and the only one to be offered publicly. Encased in a white fiberglass robe rather than sparkly metal-flake, the prototype had been taken to a trade show in 1971 to demonstrate the first coin-operated commercially produced video game. McLemore paid $9,500 for it. “That’s the baby,” he says, patting the machine, now in a storage locker waiting to be added to the Computer Space lineup in his museum.

McLemore also has been collecting 100-year-old postcards and photos of arcades and piers so that he can display turn-of-the-century machines in period-style settings. “These machines are like old cars; they like to be used,” he says. “They get cranky if you don’t run them.” The Museum of the Game (arcade-museum.com) will balance playable machines and historic machines, with themed areas and educational sections. The interior mechanics of three types of machines will be displayed in clear cases.

“I hope to spark creativity in others,” McLemore says. “And it’s a way to honor the work of countless people and companies over more than a hundred years, and to remind people that game technology didn’t just begin with video games in the 1970s.”