The majority of Ed Meyer’s $350 million net worth comprises commercial real estate ($195 million). The Meyers’ remaining net worth comprises stock in the family’s Meyer Oil Co. ($91 million), cash and a diversified portfolio of marketable securities ($28 million), three personal residences ($26 million), and an art collection ($10 million). Meyer, age 64, would like to diversify his concentrated position in the oil stock, but he is concerned about income tax consequences. His basis in the oil company stock is $11 million.

The Meyers have established an irrevocable life insurance trust (which owns a $10 million joint and survivor insurance policy on Ed and his wife, Katherine) for the benefit of their four grown children. The Meyers make $11,000 annual exclusion gifts to the individual trusts they established for each of their six grandchildren (ages 5, 8, 11, 16, 20, and 22). They also make annual exclusion gifts directly to each of their children.

Heidi L. Steiger: He has considerable net worth, so he wants to think about how he can make gifts without exorbitant gift taxes.

Jane Tse: The Meyers can do the same things we suggested for John Carey. First, they should use their lifetime exemption amount to make gifts, and again, they should make gifts with discounted interest to maximize the exemption.

HS: Not only should they be gifting the children and the grandchildren, but they should also consider gifting the spouses. Since most of the grandchildren are school-age, they could also pay for their tuitions. The other thing is to make use of the generation-skipping tax, which is $1,120,000. They can transfer assets to the younger generation and remove those assets and future appreciation from the estate.

RR: Is there a particular strategy the Meyers should employ regarding their homes?

JT: There is an entity called the QPRT [qualified personal residence trust]. They could put a house in a trust and retain the right to live in the house for a term of years. At the end of the term, the house would go to their children. The IRS gives a value to the fact that they’ve had the enjoyment of the property. So even though the property is worth $1 million, using the IRS valuation tables, if they retain the right to use it for 10 years, that might make the gift really worth only about 40 percent of the $1 million because the IRS gives a value to the term, the use, that they have retained.

It’s better to do the QPRT when the interest rates are high. Then what [the Meyers retain] is valued at the higher rate. The only trick is that they must survive the term. But they’re only 65, which is not that old. If they survive the term, the property passes to their children or to a trust for their benefit. If they want to continue to live in that house, they have to pay fair market value rent to the children. But that’s fine; it’s another way to transfer wealth.

Diane Lederman: When you create a QPRT, you’re retaining the right to live there for a period of time, so there is no gift in that portion. It’s a gift of only the remainder. You would pay a gift tax today, or it could be part of your $1 million exemption. At the end of the term, your children or the trust for your children would own the residence at no further gift tax cost.

HS: The other benefit is that if you create it with only part of your ownership interest, when you die, what your estate includes is a partial interest. That might allow some valuation discounts, which would reduce estate tax.

Robert C. Lawrence III: In particular, if you were using [the home] only once a year—a vacation home or a second home—it may not be so onerous. I have a client who had a home in Nantucket, and he thought that it would appreciate substantially. Ten years ago, we put it into a 10-year QPRT, and all that appreciation of the value of the house is now out of his estate. It’s very significant.

JT: I don’t know how old Katherine is, if she’s younger or in better health than Ed, but she should do her own QPRT. Maybe she has a better chance of surviving the term, or we could run the term longer. What we suggested for John Carey, we’d suggest for the Meyers, too. They can each set up their own GRAT [grantor retained annuity trust, another way to make gifts without incurring transfer taxes]. We don’t know whether Mrs. Meyer has any assets in her own name, but Ed can transfer assets to Katherine for her to make gifts to the children.

RR: What about diversification issues?

JT: Ed wants to diversify, but we don’t know if his is a publicly traded company. If it is public, then he can just go to an investment bank and get collars and other diversification products.

HS: The charitable remainder trust could be good especially in light of having the large single stock position. If it’s marketable, he could do a CRT very easily; but if it’s private, it’s a different story.

RL: [Investment banks] have what are called exchange funds. If he has conglomerate stock, and it is acceptable to an exchange fund, he could perhaps be able to put that in [an exchange fund] and get an interest in that fund. It’s another means of diversification.

RL: Let’s say I have $5 million and I put it in a trust, and I give an annuity interest, which is a fixed percentage of the initial value of the contribution, each year to charity. At the end of the term of the trust, say 15 or 20 years from now, the remainder, what’s left, goes to the children tax-free. So, whatever the value of that income interest is at the time that I make the gift will be passed to the charity. It will not be taxable as a gift because it’s going to charity—so it qualifies for the charitable gift deduction. Only the remainder interest would be subject to the gift tax. If I put $10 million in the trust, it may be only 10 or 20 percent that will be deemed a gift because that would be the only value that would be taxable—the value that would be going to the kids. I’m passing along the underlying capital.

RR: Can you elaborate?

RL: There are two ways to do it. One way would be in a grantor trust. I would be able to take a deduction against income taxes in the year that I create the trust. Let’s assume the annuity is worth $4 million, and I have a high income that year. I’m going to get a pretty big deduction against my income tax. But thereafter, on any income earned in trust for the next 15 to 20 years, I’m going to have to pay the tax—it’s not all gravy—with no charitable deduction.

But in another way, I’m depleting my estate by paying taxes and getting money down to my kids, transferred tax-free. I also received a big income tax deduction, and I had no gift tax cost. The second way is that I do not make it a grantor trust, and instead I make it a non-grantor trust. The trust would be taxable on the income as it’s earned over the 15-year period. I would not get an income tax deduction.

JT: But the trust gets a charitable deduction.

RL: Let’s say I go the second route, and I take $10 million and put it in a CLAT, a charitable lead annuity trust. I get a gift tax charitable deduction of $8 million, so I only have a taxable gift of $2 million.

Since my wife and I each have $1 million exemptions, there’s no tax. So, I’ve now gotten $10 million out of my estate that’s not going to be taxed. The charity has the benefit of the income from the $10 million on an annuity basis for the next 15 or 20 years. At the end of that term, the trust can either pay out to my children totally free or, if the income from the capital appreciation has been equivalent or greater than the amount that has been paid to the charity, the $10 million plus any excess will go to my children. I may want to continue it in trust for my children. It would depend on whether I wanted to use my GST [generation-skipping tax] exemption. Theoretically, if I used up my GST exemption, which is also $2 million, I could qualify all that $10 million plus, forever, from further transfer tax.

RR: What about the life insurance trust?

RL: They may want to enhance their insurance or do a second life insurance trust. Under U.S. law you can take out a variable life policy and pay a big premium up front. The variable life policy is a deferral mechanism, so as long as it’s in insurance the gains are not subject to income taxation. If you meet the various requirements, what you can do is take a variable life policy, and benefits will be dependent on an investment account. It never gets taxed, and whatever amount I’m entitled to is turned over to the trust. 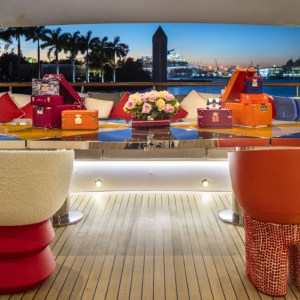