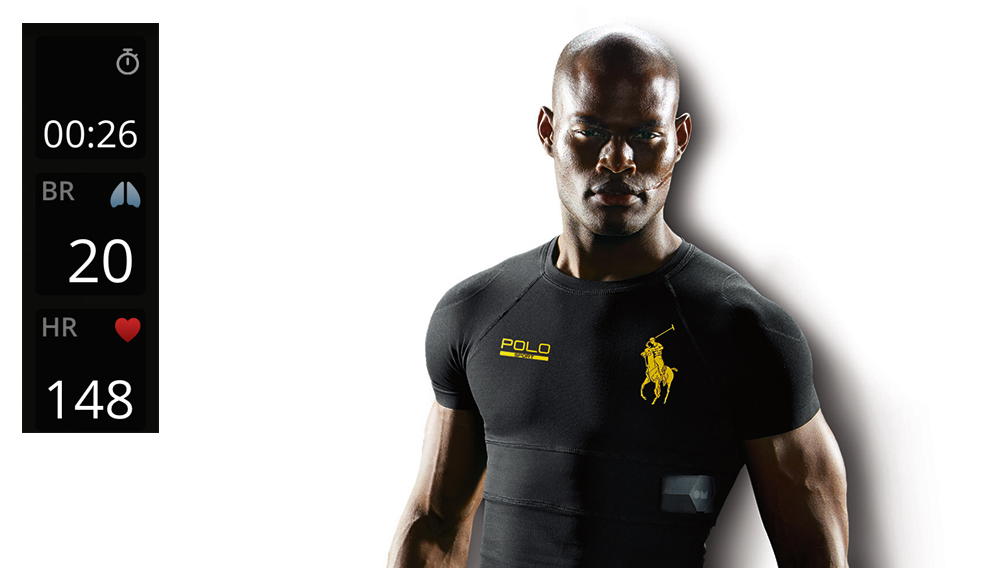 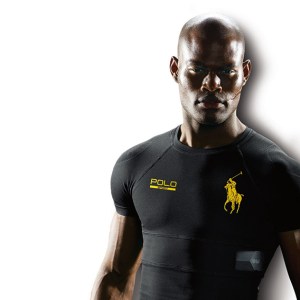 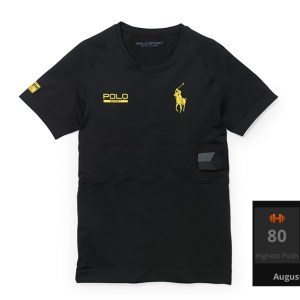 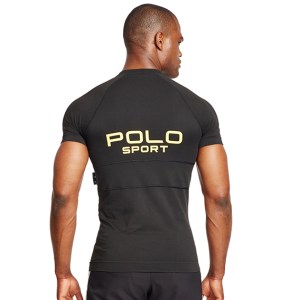 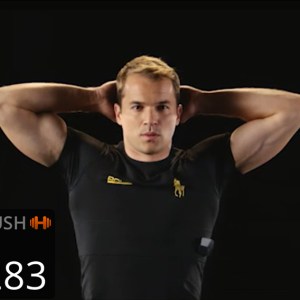 Innovative, inspiring, and intuitive, the Ralph Lauren PoloTech smart shirt is everything you would want in a personal trainer—without the continual expense. As a former fitness professional myself, I understand how real-time quantitative data maximizes the efficacy of any workout regimen. Couple these figures with exercises that are adapted to the individual (helping to avoid injury) and that are varied often in order to prevent plateaus in performance, and the likelihood of sticking with a program and reaching set goals is greatly increased. Curious as to how a piece of apparel could weave in so many elements, I wore Ralph Lauren’s new state-of-the-art activewear during a couple of workouts and realized that it not only delivers—it does so with style. Sized down to ensure a snug fit, the black shirt—with the brand’s iconic logo embossed on the chest—relies on silver fibers throughout the fabric that measure and track a number of biometrics including heart rate; the depth, balance, and rate of breathing; calories burned; steps taken; and overall intensity and stress levels. With proprietary technology from OMsignal, the shirt gathers intel through a small black transmitter with five connectors that snap to the left-hand side of the shirt at the base of the wearer’s ribcage. Inside the transmitter is a gyroscope, and a 3-D accelerometer that monitors movement based on g forces. The data is transferred to an iPhone (with iOS 8 or above), an iWatch, or an iPod Touch (at least fifth generation) and viewed with the downloadable PoloTech app—where the shirt truly delivers. No mere static display, the PoloTech app—which was designed by the health and fitness gurus at the media firm Galvanized—not only manages the metrics of your own workout, but offers adaptive routines of its own, led by the well-known trainer Chris Ryan. The individual exercises will vary within each workout depending on the biofeedback, keeping you within the intensity zone best suited for the desired goal. This real-time customization results in over 10,000 variations in the provided programs, which are divided into the categories of cardio, strength, and agility. The app also offers a 2-minute test to determine workout readiness and a 5-minute recovery assessment. Wearing it on an unusually warm and humid evening while running along Zuma Beach and the hills of Point Dume in Malibu—near the Robb Report headquarters—I was immediately impressed with the overall comfort of the short-sleeve. Made from 70 percent polyester, 21 percent nylon, and 9 percent spandex, the machine-washable (remove transmitter first) shirt is breathable, surprisingly unrestrictive, and sewn with flat seams to prevent chaffing. Worried at first about its skin-tight nature, the girdle-like fiber band actually makes for a surprisingly flattering fit. Having selected fat-burning (zone 2) as my goal and entering the estimated duration of activity, I started out with a synched iPhone 6 in hand and was constantly aware of my heart rate, caloric-burn rate, and breaths per minute—all at a single glance. Alerts would appear when I was varying from my desired zone, helping me make adjustments to my pace. When finished, a detailed report broke down the workout with stats on average and maximum heart and breathing rates; a push rate that measures exertion, power, and effort; an intensity profile throughout the run; and how long I stayed in the five zones (warm-up, fat-burning, endurance, performance, and max effort). The takeaway from the day was that I had spent less time than I had thought in the effort zone that was most beneficial to my goal. Now I can make adjustments for my next workout—thanks, coach. Released on August 27, the Ralph Lauren PoloTech shirt is the first in a line of digital performance wear under the new Polo Sport division. Tested and demonstrated at the 2015 U.S. Open tennis tournament, it is currently available online and at Polo Ralph Lauren stores both in New York City and in the U.S. Open’s USTA Billie Jean King National Tennis Center. Retailing at $295, the shirt’s cost is the same as about two private sessions with a personal trainer. (ralphlauren.com)