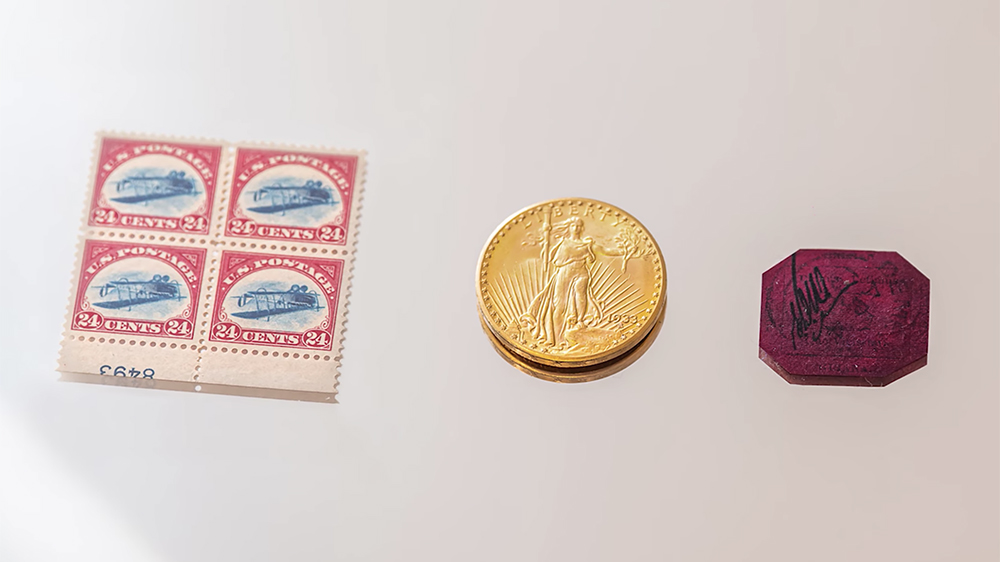 Sotheby’s is keeping its next big sale short and sweet.

The auction house is holding a special “Three Treasures” auction this coming Tuesday, consisting of just three lots—a 1933 Double Eagle coin, a 165-year-old One-Cent Magenta stamp and a sheet of “Inverted Jennies.” Whether or not those names immediately set off alarm bells in your head, they’re expected to fetch as much as $37 million when they go under the hammer.

The rare coin and stamps currently belong to shoe designer Stuart Weitzman, whose eponymous company is owned by Tapestry, the same company that owns Coach and Kate Spade. So why is the life-long collector parting with some of his most prized possessions now, especially since he spent more than $17 million acquiring the items? Because, as the 78-year-old recently told The New York Times, “No one takes a U-Haul to the cemetery.”

While each item of the “Three Treasures” is a true wonder, the highlight may be the 1933 Double Eagle coin. Originally cast as a $20 coin, it was never issued for use because President Franklin Roosevelt took the country off the gold standard. This particular example is one of the few that wasn’t destroyed, as well as the only one ever allowed to be privately owned. It’s expected to sell for between $10 million and $15 million.

But while the Double Eagle is considered the “Mona Lisa” of coins, the stamps on offer are just as special. The first, British Guiana One-Cent Magenta stamp, is the only one of its kind. Dating back to 1856, and initialed on the back by Weitzman (like all its previous owners), the stamp is expected to go for between $10 million and $15 million.

Finally, there’s a block of “Inverted Jenny” stamps, the very first US airmail stamp. Issued in 1918, the four 24-cent stamps each features an image of an upside-down airplane due to a printing error. Easily the most recognized and sought-after US stamp, the block is expected to fetch between $5 million and $7 million.

The three items, which are currently viewable by appointment at Sotheby’s in New York, will go up for bidding on June 8. If you’re looking to get all three, or even just one, prepare to spend and spend big.