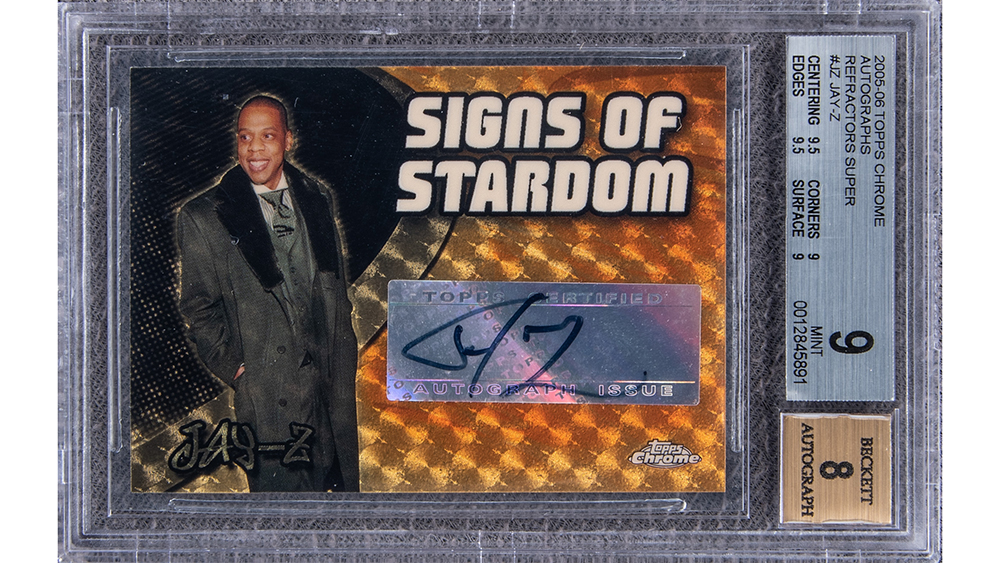 It turns out even a 2-D Jay-Z is capable of drawing in six figures. A trading card featuring the billionaire multi-hyphenate has sold for more than $100,000 at auction, establishing a new record high in the process.

The coveted card, which also features the hip-hop star’s signature, was offered at Goldin Auctions’ monthly card sale over the weekend. The lot had a minimum starting bid of just $500, though things quickly escalated with 49 bids ballooning that figure to a total of $105,780. According to the auction house, this is an all-time record price paid for any non-sports or non-trading-card-game card at auction.

The pocket-sized collectible features an image of the famed rapper and businessman looking impossibly sharp in a three-piece gray suit. It reads “Signs of Stardom” and has the 55-year-old’s autograph affixed to a silver strip underneath. The auction house gave the 2006-2007 Topps Chrome card a “Mint 9” grading, which is market lingo for “great condition.”

A statement on the card’s back by Topps attests to the authenticity of Hov’s signature.  Goldin Auctions

This month’s card auction brought in an eye-popping $8.5 million in total and reflects not only the growing interest in collectible cards but also their ability to garner massive bids. Back in February, Goldin sold two Michael Jordan rookie cards for $738,000 each, shattering a record that had only been set the previous month. Furthermore, Goldin says it’s surpassed the whole of last year’s sales—that’s some $100 million—in the first three months of this year due to uber-successful auctions.

Meanwhile, Jay-Z’s net worth is experiencing a similar boom. The business mogul recently sold 50 percent of his Champagne brand Armand de Brignac, a.k.a. The Ace of Spades, to LVMH for an estimated $300 million. He also sold his controlling stake in the streaming platform Tidal to Twitter co-founder Jack Dorsey for approximately $296 million. As a result, the rapper’s net worth has jumped 40 percent, from $1 billion to $1.4 billion, according to Forbes.

All of which indicates his inclusion in the Signs of Stardom pack was right on the money.