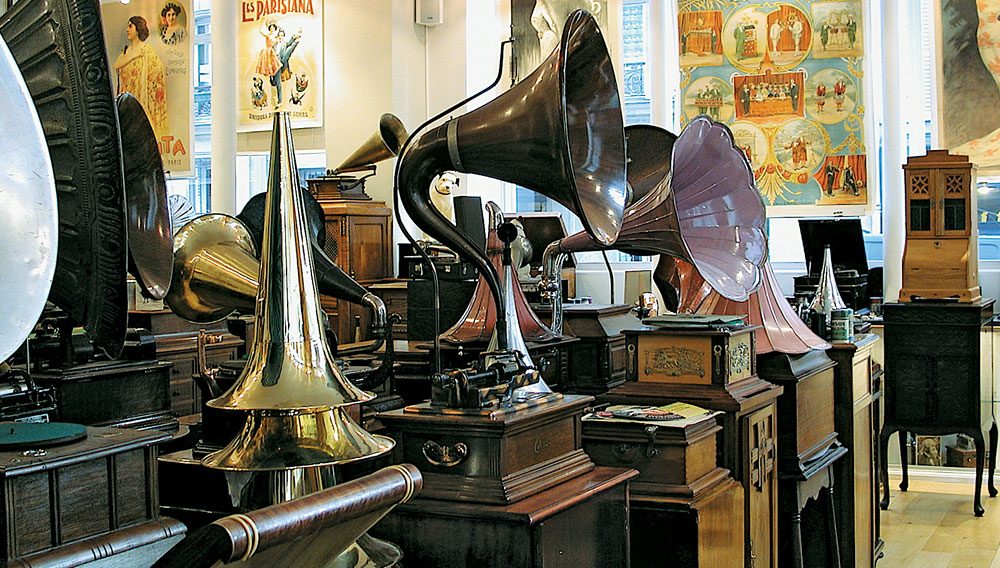 Jalal Aro opened the Phonogalerie (www​.phonogalerie.com) shop in its current location in the ninth arrondissement of Paris in 2004, though the business truly began 13 years earlier when the Syrian expat purchased his first gramophone. At the time, Aro knew little about the machine except that he liked it—he liked how it looked and, more important, he liked how it sounded. Shortly after acquiring that antique record player, he purchased a book on the topic. It was then that he learned of all the various record-playing devices that were made over a century-long period, and that knowledge set him on a journey to build a collection that chronicled the advancements of the machine. “Some people don’t take the time to go through the books, but that’s what I like to do,” he says. “It’s important that when people come here, they’ll learn everything about the machines.”

In addition to selling the machines, Aro stocks his 1,291-square-foot shop with period-specific records for all the machines he sells, as well as posters and other forms of advertising that were prominent during those times. Aro declares that his shop is the only boutique that boasts an inventory spanning the entire evolution of the machine. About 30 percent of his customers are dedicated collectors, while the rest are looking for one noteworthy player. In either case, the 44-year-old proprietor says his customers always are purchasing the machines for their ability to play and the sound quality that they produce. “That’s why I started to collect,” he explains.

“If you’re not a collector and if you don’t do it with passion you’ll never do it right,” he says of running this type of business. “You must put your heart into it and then you can make it right.”