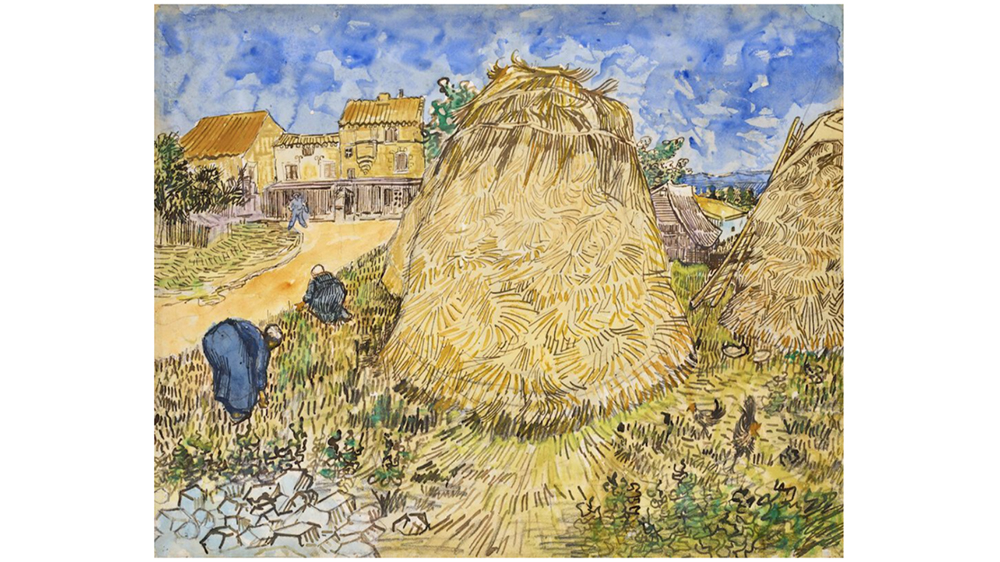 A landscape scene by van Gogh sold under duress by its original German-Jewish owner and looted from another in the years leading up to World War II is coming to auction. It will be auctioned next month on November 11 in New York as part of the $200 million impressionist collection of Texas oil magnate Edwin Cox, who died in November 2020. The money from the sale will be included in a settlement agreement to the heirs of Max Meirowsky, Alexandrine de Rothschild and representatives for Cox’s estate.

Van Gogh’s Meules de blé (1888) is a work on paper depicting an outdoor scene of yellow haystacks in Arles, France, where the painter spent his last days before his death in 1889. The piece resurfaced when Christie’s was selected by the Cox estate’s representatives to sell the collection earlier this year. Of the many works from the grouping—including examples by Gustave Caillebotte, Paul Cézanne, Claude Monet and Edouard Vuillard, which have not been seen in public since the 1950s—Meules de blé is among the most valuable with an expected price of $20–$30 million.

The van Gogh’s original owner, Cologne and Berlin-based railway industrialist Max Meirowsky, purchased the work from a Paris dealer in 1913. Active in the early 20th century, Meirowsky amassed an Impressionist collection that included works by Renoir and Gaugin. He was forced to auction the works at the Berlin auction house H. W. Lange in November 1938. Before coming into Meirowsky’s hands, Meules de blé was owned by Theo and Johanna van Gogh-Bonger and the painter Gustave Fayet.

In late 1938, Meirowsky fled Germany for Amsterdam and then went on to Geneva. During that time, he placed Meules de blé in the hands of dealer Paul Graupe & Cie., in Paris. In 1939, the van Gogh painting resurfaced and was sold to Alexandrine de Rothschild, an heir of the industrialist art collecting Rothschild family. With the outbreak of the Second World War, Alexandrine fled to Switzerland. Her art collection in Paris, including van Gogh’s Meules de blé, was confiscated by the Nazis during German occupation of the city. In the postwar years, she sought to recover her looted collection of Post-Impressionist art and manuscripts, but Meules de blé remained at-large. Cox purchased it from New York dealer Wildenstein & Co. Inc. in 1979.

“It is especially moving that Christie’s Restitution has been so deeply involved with this collection,” Marc Porter, Christie’s Americas chairman, said in a statement. “We have made WW2 period provenance research a hallmark of our expertise, inextricably a part of the art historical framework.”

Christie’s specialists are calling Meules de blé a masterpiece. If the work reaches its low estimate, it will set a record for a work on paper by van Gogh sold at auction. In March, a rare drawing of a French girl by van Gogh, titled La Mousmé (1888), a Japonisme-inspired depiction of the young sitter, sold for £7.5 million (roughly $10.4 million). The result was shy of the current record for a van Gogh drawing on paper at $14.6 million, which was set in 1997 at Sotheby’s in London.

In 2005, heirs of Mierowsky made a claim to recover the painting Felsige Flusslandschaft (n.d.) by German artist Otto Scholderer from the Von der Heydt museum in Wuppertal, Germany. The museum purchased it in 1939 after its forced sale a year prior.