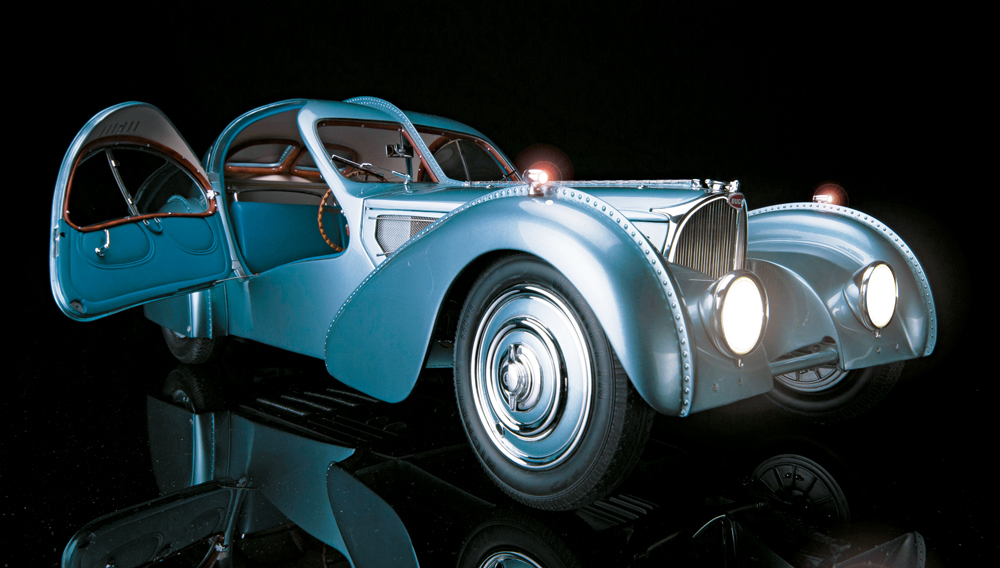 Amalgam Fine Model cars of Bristol, England, is offering an exact one-fifth-scale replica of the Bugatti Type 57SC Atlantic ($260,000), a styling tour de force from the mid-1930s that has become one of the world’s most valuable collector cars. Bugatti built only four Atlantics, two of which have survived in their original condition.

Amalgam can replicate the coachwork for any of the three Type 57SC chassis for which it has data. Shown here is a model of chassis number 57374, the first Atlantic that Bugatti produced. The car was built in 1936 and is now in the collection of the Mullin Automotive Museum in Southern California. After a restoration by its previous owner, it won Best of Show at the Pebble Beach Concours d’Elegance in 2003.

The Amalgam Bugatti comprises more than 3,500 parts, including electroformed nickel body panels that feature miniature rivets. The aluminum and brass engine parts and running gear are made with lost-wax castings. The model delights with such details as operable turn indicators and headlamps, as well as a hood, trunk, and doors that open and close. The wheel covers can be removed to reveal the wheels’ intricate wire construction, and the wheels themselves can be unbolted from their hubs. According to Amalgam, the model requires about 5,000 hours of labor, which includes patternmaking, electroforming, casting, assembly, and finishing.

“The car is regarded by many as the most important design in the history of the automobile,” says Amalgam’s founder and managing director, Sandy Copeman. “We have made it our mission to create models of outstanding authenticity in terms of detailing and material, with a total focus on quality and absolutely no concessions to budget.”