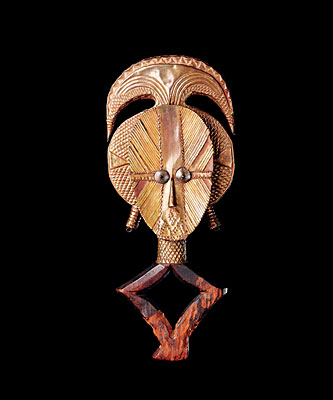 Europe’s fascination with so-called primitive art reached its apogee during the first half of the 20th century, when artists such as Picasso, Modigliani, and especially the German Expressionists embraced the powerful, elegant sculpture of Africa as a source of inspiration. Western curators and connoisseurs formed collections of these masks and figures, which were elemental to the spiritual and cultural lives of the tribes that created them. This early-20th-century Luba Kifwebe mask is from the Congo region and, like the Kota Mbulu Ngulu figure, is available through Manhattan’s Pace Primitive gallery (212.421.3688, www.paceprimitive.com). The piece exhibits the classic striations and wood carving typical of the Luba tribe, applied here to an atypical, nonrectilinear shape. The Kota, from Gabon, is an icon that tribe members placed atop a basket of ancestral relics as a guardian.