Porcelain earned the nickname “white gold” from the European aristocracy who treasured it during the 18th and 19th centuries, a time when lavishly decorated objects such as this pair of 1829 palace vases denoted the wealth and power of their owners. The Russian Imperial Porcelain Factory, founded in 1744 to supply wares to the royal family and other Russian nobles, produced these two vessels early in the reign of Czar Nicholas I. The factory reached new technical and artistic heights under the tenure of the czar, particularly with larger pieces such as these, which stand 28 inches tall and measure 17 inches wide. According to Mark Schaffer of the A La Vieille Russie gallery in New York, which is offering the pair for $450,000, the vases’ ample size and their high-quality gilded and painted exteriors indicate that they were destined for one of the palaces around St. Petersburg, but it is not clear where they were installed. The gallery purchased them from a private American collection. 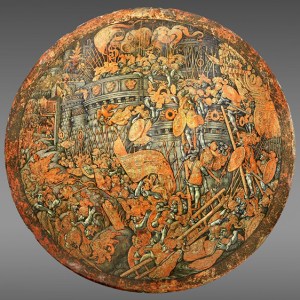 Nazis Stole This Historic Shield From Czechoslovakia. The Philadelphia Museum of Art Is Returning It.